The strategic reasons behind the early election decision are multidimensional and it may influence current Turkish foreign and security policies. The decision itself poses many opportunities as well as risks for Turkey’s short-term strategic and military engagements along the Syrian border. 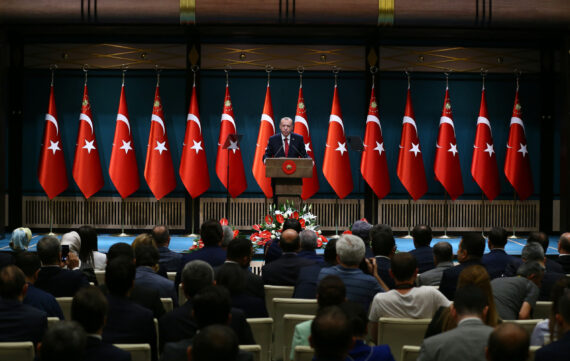 On Wednesday 18 April, President Recep Tayyip Erdogan announced that Turkey will go to polls for snap presidential and parliamentary elections on June 24, 2018. The decision was released following the day after Nationalist Movement Party (MHP)’s chairman, Devlet Bahceli, called for a snap election to be held in August. Many in Ankara was expecting Turkey to hold early elections for various different reasons. As President Erdogan explained in his press meeting on Wednesday, Turkey has been suffering substantial security threats not only emanating from internal turmoil but also regional politics since the thwarted July 15 coup attempt in 2016. More importantly, since the constitutional referendum in 2017, Ankara has been actively working on constructing a new governmental system without undermining political, economic and security balances of Turkey. It can be argued that the snap election decision is a reaction against the uncertainties taking place in domestic and regional politics.

The strategic reasons behind the early election decision are multidimensional and it may influence current Turkish foreign and security policies. The decision itself poses many opportunities as well as risks for Turkey’s short-term strategic and military engagements along the Syrian border. Moreover, it might impact the course of the fight against terrorism, particularly against the PKK.

Turkey should carefully take the security imbalances of Syria into consideration, especially after the limited missile strike led by the U.S., France and the U.K. caused many uncertainties. The ongoing Astana process, Turkey’s fight against the PKK, and the current political rift between Ankara and Washington over the issue of the PKK-YPG are forcing Ankara to take a more comprehensive strategy regarding the Syrian crisis. A recent act of Macron is a striking example that demonstrates how Turkey’s strategic priorities are being undermined by France and other international actors in Syria. Macron’s formulation of the aim of the limited air strike, as drawn from his TV interview, in which he said that “with these strikes and this intervention, we separated Russia and Turkey on this issue,” is directly targeting Turkey’s increasing rapprochement with Russia in Syria and beyond.

The increasing willingness of France to become a new player especially in eastern Syria in order to recalibrate France’s strategic interests in consolidating the PYD-YPG presence is perceived as a potential rival in addition to the U.S. Turkey’s strategic goals to confine PKK presence in Syria and to de-territorialize the terrorist group  are also under risk if the ambiguity continues. According to President Erdogan, developments in Syria and elsewhere have made the early election decision urgent to switch to the new executive system in order to take steps for Turkey’s future in a stronger manner.

As I have argued on many platforms, the new system will bring a strategic flexibility for Turkish foreign policy. Therefore, Turkey’s new orientation and reconstruction of its national security strategy will be an important anchor of domestic and regional stability in the post-2018 presidential election atmosphere.

The political and economic situation in Turkey, as president Erdogan has put it, faces many challenges under the circumstances that emanate from regional instability. Erdogan believes that domestic political stability is a vital necessity while Turkey is fighting in many fronts against terrorism. Articulated as such, the PKK and FETO are the main threats to Turkey’s domestic stability. The fight against the PKK within Turkey and beyond, and the ongoing efforts to clean state institutions from FETO criminal cult members require a strategic decisiveness and comprehensive strategy.

The new political structure that will emerge after the election, particularly in terms of the effective decision-making process and the new political consensus in the ground between the AK Party and MHP are expected to facilitate Turkey’s ongoing struggle against terrorism. More importantly, the Turkish economy has been suffering a lot because of the uncertainties and the recent political crisis between the Western world and Turkey, particularly between Ankara and Washington, which may destabilize Ankara’s political decisiveness in the near future. The uncertainties also negatively affect the timely and effective decision-making processes on the big economic projects.

From a security perspective, the economic stability is an integral part of Turkey’s ongoing military activism in its geopolitical landscape. The security establishments in Ankara also believe that Turkey should be ready to fight in the region if it wants to maintain its territorial integrity and regional order. Therefore, president Erdogan and the AK Party calculate that early elections in June would eliminate the risks and uncertainties.

However, the question remains in what sense Turkish foreign policy would be influenced by the early election decision. One of the significant strategic reasonings behind the timing of the presidential election is directly related to the foreign policy strategy, for which many crucial strategic issues are at stake. The current Turkish military strategy in northern Syria cannot tolerate a waste of time, as Turkey’s continuation of inaction is likely to provide more strategic and political progress to the PKK-YPG in the country. However, a two-month period for the election campaign can be tolerated by Ankara since the negotiation between Washington and Ankara will be continuing during this time particularly over the issue of the PKK’s removal from Manbij. Turkey’s strategy towards the Syria crisis, in general, is also an important dimension regarding the timing of the election date.

There is common sense in Ankara that the Syrian crisis may rapidly transform towards a new direction, in which many international actors would take part. The continuation of the increasing debate over Turkey’s domestic politics may undermine Turkey’s current strategic position on the international platform. Therefore, President Erdogan wants to consolidate its power in foreign policy through the early election and maintain Turkey’s strategic decisiveness not only against PKK terrorism, but also against those who aim to undermine Turkey’s stability.

President Erdogan believes that developments in regional politics are important as much as domestic political stability. There is a mutually constitutive relationship between the two domains. The elections, therefore according to the President, are expected to bring more confidence to Turkish foreign policy.