What Happened in Turkey on February 28?

Those who claim that February 28 was not a coup are only trying to cover up their own crimes. I’m not sure who coined the term “post-modern coup,” but it is being used frequently. What does this mean? Nothing essentially. 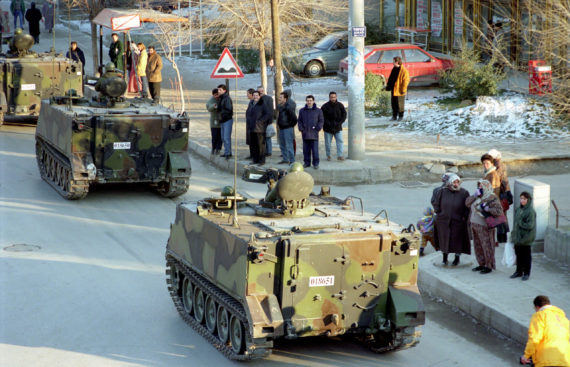 Prior to the coup, in order to create a fear environment and in blackmailing the then Prime Minister Necmettin Erbakan to resign, the armed forces drove tanks in Ankara, February 4, 1997. Anadolu Agency archive.

February 28 was a coup. There was nothing post-modern about it. In a clear and direct way, it was a military coup d’état. The government was deposed through threats, blackmails and various other methods. Illegitimate means were used. It was anti-democratic.

While the army led the way, academics supported them, the business world preferred this overthrow and the media announced the whole thing. A legitimately elected government was deposed due to its number of deputies in Parliament. Politicians were threatened at the National Security Council. They were forced to sign various decisions. Tanks paraded on the streets. People were arrested. Discrimination occurred in all spheres, on all levels. Methods of political engineering were applied. Psychological warfare became part of everyday life. If this is not a coup, then what was it?

Those who claim that February 28 was not a coup are only trying to cover up their own crimes. I’m not sure who coined the term “post-modern coup,” but it is being used frequently. What does this mean? Nothing essentially. Are coups modern? Did they not exist before modernity? What does post-modernism, a phenomenon of the social sciences, have to do with February 28? The whole thing is farcical.

The coup’s most prominent aspect was education. With discriminatory policies and double standards, the religious segment of society was barred from accessing education. The headscarf ban was implemented and wasted away a generation. The 28 February coup was not only framed against politicians, but against society.

In the upcoming years, all these estimates may become clear. For instance, it might be easier to calculate how many people were denied the right to an education due to their headscarves. Yet, we may not know how many girls had to remove their headscarves in order to access education. Moreover, we may never know the cost of the trauma the coup had on the psychology of these girls.

Think about it. How many girls had to give up on registering to university because of the headscarf ban? You may have seen such examples around you. It is possible to understand what a prominent tragedy this was by listening to personal experiences. We may assume that it has a higher cost when we think about society as a whole. Despite these events, if some are still claiming that February 28 was not a coup, this means that the arrays of events have not been explained well enough.

Another aspect of this hostility and design was the quotient issue of imam-hatip high school graduates. Through the implementation of a quotient, the coup plotters wanted to bar a generation from accessing education. Those who remember will note that in the summer of that year, regulations involving university entrance had changed. High school seniors learned that entering a university was almost impossible in the autumn. More, they were told that they could not transfer to other high schools as it was also banned. Some transferred to open high schools, where they would complete their education from outside the system. There were a few who entered foundation universities. Some had to go abroad, as if they were exile. They suffered a lot. Yet, these people were the only ones that could have saved themselves as a minority. Most of them were doomed and were forced to apply to open education. While their scores were enough to enter prestigious universities in Istanbul or Ankara, they were forced to register to associate degree programs.

We didn’t forget, we won’t forget

Who could possibly calculate the estimates of this cost? Who is to be held accountable for the people deprived of an education? There is a vile figure left from those times. He was only recently defending all these discriminatory practices on TV. In the eyes of God, everything is forgivable, with the exception of injustice towards a fellow human being. Thousands of people were barred from establishing a good career and helping their children and grandchildren establish a good career. Is this a forgivable crime?

I came across a friend of mine who could have entered the most prestigious universities in Turkey had these unjust practices not been implemented. He told me that he had worked in various villages and towns of Anatolia for many years as a high school graduate. After many years he re-entered the university exam. He said he would be graduating soon. “After 18 years, I barely got everything back on track,” he said. Who is going to answer for all these years wasted? Who can claim that February 28 was not a coup? It was a vile coup that stole the future of people.

There is never a “good” coup, as all of them in all forms are detrimental. However, February 28 was different than previous coups as it tried to achieve more. The government deposed with the May 27, 1960, coup and which was replaced with state bureaucracy had an impact on the state, but not directly on society itself. The right to education was not barred. The March 12, 1971, coup was realized among various fractions of the state and was mostly dis-regarded by the people. The September 12, 1980, coup hurt a lot of people. However, it had a limited design towards the people as it aimed to perpetuate the tutelage system. It did not care about left or right wing politics – its focus was the state. Meanwhile however, the February 28, 1997, coup did not only push the largest ideological group in Turkey away from politics, but also attempted to destroy them. In this respect, the February 28 coup is on par with the July 15, 2016, coup attempt. The July 15 coup attempted to have a larger impact than February 28. It tried to control all of society, not just a particular segment. If the July 15 coup attempt had been successful, the Fetullah Terrorist Organization (FETO) would have had control of both the state and society. As they failed with this aim, they attempted to push the country into a civil war. Considering these factors, only July 15 could be compared with February 28 in terms of vileness.

There is never a “good” coup. Military overthrows are vile. However, some are trying to whitewash February 28 today. Excuse me, but we have not forgotten, and will never forget the tragedies lived.

Hasan Basri Yalcin is a faculty member at the Politics and International Relations department at Istanbul Commerce University. Yalcin is also the director of the Strategy department at SETA Istanbul.