What If It Works? The CHP's Local Election Strategy

Kilicdaroglu's excuse for a possible defeat is already at hand. He will argue that the CHP failed due to the group divisions in the party, which accentuated their own identities rather than the party identity. 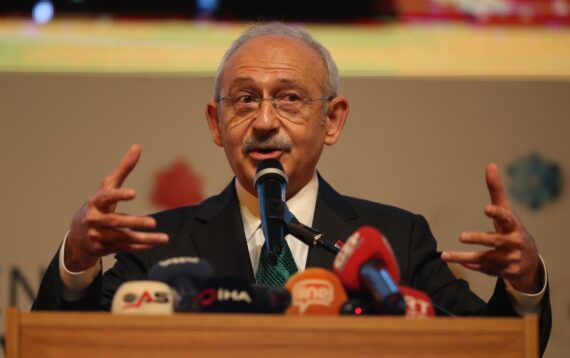 Chairman of the Republican People's Party (CHP) Kemal Kilicdaroglu delivers a speech during the CHP presentation of mayoral candidate Mustafa Bozbey for Bursa in Bursa, Turkey on January 26, 2019. Anadolu Agency

In Turkey, one of the favorite songs of those defining themselves as “leftist” is Mills (Değirmenler in Turkish) by Bulent Ortacgil, of which the lyrics go: “You, me, against the windmills. Consciously, each of us as a vanished warrior. We flow into seas as rivers. Maybe the finest way ever is this way…”

This is a specific mentality, an ode to defeat that is internalized and which has almost become part of genetic codes for a certain political segment. To put otherwise, it is a victim mentality based on finding excuses for failure and defeat. There is a famous Winston Churchill quote, which was also often repeated by the late Turkish President Suleyman Demirel: “No excuse can replace success.”

When I look at the main opposition party, the Republican People’s Party (CHP) nowadays, I recall Ortacgil’s Mills and this particular Churchill quote Demirel was fond of because there are roughly three blocs within the party. The first one is the core crowd gathering around CHP Chairman Kemal Kilicdaroglu. The second is the crowd around Muharrem Ince, who are looking forward to seeing a CHP defeat in the 31 March local elections, and the third is the group who either passed to the Democratic Left Party (DSP) or resigned from the CHP since they could not become candidates. If the CHP enjoys an election victory under the leadership of Kilicdaroglu on March 31, the second and third groups will resolve. However, if the opposite holds true and the party faces a defeat, the last two groups will revolt and even draw a part of the first group to their side in an attempt to call for an extraordinary meeting.

One does not need to be a clairvoyant or an analyst to know the CHP and the corridor whispers to be able to predict all these things. Everything is pretty obvious.

Developments within the CHP reflect Kilicdaroglu’s purge attempts within the party. Rather than having ideological concerns, his motivation is to consolidate power and undermine rivals.

Although the CHP is currently focused on the local election, all the leading names in the party, including Kilicdaroglu, are currently eyeing what will happen on the morning of April 1. While determining the candidates almost by himself, his main concern has been to gain strength by April 1. This is why Kilicdaroglu did not nominate anyone who acted with Ince before and has been siding with candidates who have stayed loyal to him, even though some of these individuals are accused of corruption.

Lately, CHP member Gursel Tekin issued a quite nuanced and strict written statement and a group of CHP mayors resigned while some names passed to the DSP. Also, former chairmen known as “the lords of the CHP” convened and Bodrum Mayor Mehmet Kocadon resigned from the CHP and became a candidate for Mugla Metropolitan Municipality.

All these developments reflect Kilicdaroglu’s purge attempts within the party, but rather than having ideological concerns, Kilicdaroglu’s motivation here is to consolidate his power and undermine his rivals.

But of course, such developments will negatively affect the CHP’s vote share. In that case, Kilicdaroglu will probably argue that the CHP could not win since the groups divided the party and accentuated their own identities rather than the party identity. So, his excuse for defeat is already at hand.

Why does the CHP fail to address larger masses?

Looking at from a more general perspective, it is evident in Turkish politics that the ruling party has won all elections since 2002, with vote shares varying between 35 and 49 percent, whereas the main opposition party has always remained between 20 and 25 percent.

The AK Party has occasionally suffered declines in its vote share. However, although such fluctuations have been experienced, the CHP’s vote share hardly changed, indicating the fact that the party failed to address groups other than its own base.

Kilicdaroglu’s excuse for a possible defeat is already at hand. He will argue that the CHP failed due to the group divisions in the party, which accentuated their own identities rather than the party identity.

Since he was assigned as chairman of the party, Kilicdaroglu has been scrutinizing underlying reasons of this situation. But while doing so, he has been acting like a surgeon, searching for a cure by applying trial-and-error method on a patient lying on the operation table.

We might quickly forget about such things, but still can try taking a step back and look at the general picture: We have seen a different CHP in each election period.

Do you remember the nationalist group transferred by Kilicdaroglu in 2011 to come to the forefront in the party’s image and discourse that included names like Emine Ulker Tarhan and Suheyl Batum?

Or, do you remember the leftist, socialist, and Alevi groups that came to the forefront by emphasizing Gezi Park protests during the electoral period in 2015?

And currently, in the run up to the local elections, Kilicdaroglu has once again changed the image of the party and addressed the electorate with a different message. This time, he is directly engaging in populist behavior, accentuating the rhetoric he adopted in the June 24 elections last year. While creating ambiguities and gaps in his party’s ideology, he is prioritizing winning and leaning towards a political opportunism that can be summed up with the motto, “No matter who you are, vote for me to undermine the AK Party.”

It’s not fair for me to give advice to the CHP, but in my opinion, the party’s biggest problem since the 1950s has been that they do not have a genuine or original opinion to present to Turkey.

During the periods when the center of politics was divided and the nation was led by coalitions, the lack of ideas was not evident on the surface. But in the last 16 years, whether we like it or not, this political center has shifted towards the AK Party and Recep Tayyip Erdogan.

Kilicdaroglu is acting like a surgeon, searching for a cure by applying trial-and-error method on a patient lying on the operation table.

The problem is not just that the CHP does not have any ideas worth expressing to the Turkish people. More crucially, the CHP is under the illusion that its criticisms of the current government, at least some of which are quite accurate, are ideas, and has for a long time been under the spell of laziness that has restricted their ideas and discourse to these limits.

Today we know very well what the CHP is against and what it thinks should not happen in the country. But we do not know what it is for and what it can actually promise Turkey.

Criticism is obviously something that is in the very nature of being in opposition and is an extremely important element from society’s point of view. It is ridiculous to criticize the CHP for their criticisms towards the government and their works. The problem is not that the CHP criticizes, but that it does not say anything else. Due to this reason, the CHP is restricted to a discourse, the main limits of which are determined by the government.

As long as this basic parameter does not change, no matter how many times the CHP changes its strategy, it will not be able to achieve any meaningful change in its number of votes. The CHP does not need political engineering or clever strategies, but needs to come up with new ideas. In other words, the CHP needs to focus on politics rather than engineering, develop a political discourse and use strategies that bring this to the forefront.

But of course, such a new political idea that has failed to emerge in the last 16 years will not miraculously emerge right before the elections. Meaning that the CHP will experience an election just like the ones in the past. We will see whether the path that was chosen, namely “what if it works”, will work or not.

Then let us return to the beginning of this article. Everyone in the CHP, from its leader to its doorman, is not only aware of the criticisms I have expressed here, but feels them in their bones. Due to this, they compete with each other more than competing with their electoral opponents, and again, everyone in the CHP is more curious about the morning of April 1 rather than the eve of March 31.