What if the US and Turkey Agree on Manbij?

Turkey's low-profile operation in northern Iraq against the terrorist organization, the PKK, illustrates that Ankara has patiently been weaving its terror strategy. If the U.S. and Turkey can agree of pushing the PKK out of Manbij, this will be a significant achievement for Ankara. 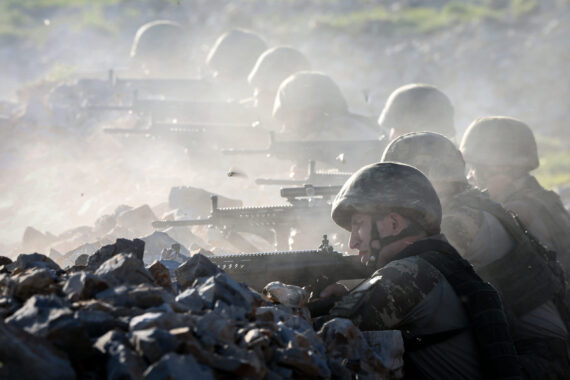 Wise countries plan their mid and long-term moves after analyzing threats and benefits. These moves might seem unrelated with each other, causing their purpose to remain blurred. However, when the smoke clears after some time, all dots connect and reveals a picture.

Turkey’s long-term counter terrorism operations are just like this. This process has proven that there is a strategic mind in Ankara. Turkey has seen the schemes in the region threatening its very survival and put a comprehensive plan into action in order to thwart them.

In 2014, Ankara saw that a terror corridor was being formed in North Syria. This terror corridor was planned to span from northern parts of Iraq, going along the Turkish border, up until the Mediterranean Sea. This planned corridor was a threat to Turkey’s territorial integrity. The October 6-8 incidents and the democratic autonomy attempts in 2014 were a part of this plan.

Ankara’s long-term action plan against this scheme has three stages:

In the first stage, terrorist elements within Turkey were aimed and the terrorist threat was minimized with trench operations launched on August 24, 2015.

During the second stage, the march of terror was halted with cross-border operations, preventing terrorist elements from reaching the Mediterranean Sea. Launched on August 24, 2016, Operation Euphrates Shield divided the corridor into two parts by the west, while the following Operation Olive Branch prevented terrorist elements from accessing the Mediterranean Sea. With checkpoints established in Idlib, preventative measures against terrorism were consolidated.

In the third stage, Turkey aims to dissolve the corridor, eliminating the terrorist threat surrounding Turkey. To achieve this goal, Turkey has put a plan on the east-west axis into action. Grip on the terrorist PKK is tightening, from west to east and east to west.

Firstly, the negotiations with the U.S. regarding the PKK’s withdrawal from Manbij are coming to an end. Diplomatic circles are expressing that the low-level meetings have resulted in an agreement and that ministers will put the finishing touches to the said agreement. Indeed, it’s possible to see the signs of this agreement in Foreign Minister Cavusoglu’s statements. Cavusoglu stated that a road map might be announced after his meeting with U.S. Secretary of State, Pompeo on June 4. According to this road map, the PKK will withdraw from Manbij, the Turkish military will oversee this withdrawal, Manbij’s security would be provided by a local police force formed by Arabs as it was the case in Afrin, and the U.S. will maintain its military presence in the region. After everything is settled in Manbij, it’s supposed that France’s military presence in the city won’t be needed. If the U.S. adheres to the agreement, Turkey will push the PKK out of Manbij and towards the East. This will be a strategic and crucial success for Turkey in counter-terrorism.

Secondly, the other stage of this grip is north of Iraq. The low profiled cross-border military operation there aims to disrupt the connection between Sinjar and Qandil, preventing the YPG from receiving logistic support. This operation has gained momentum. Qandil is being sieged rather silently. Then, Qandil will be interned and the line will be pushed towards the West.

Looking at the bigger picture, it is possible to state that Ankara has patiently weaved a plan thread-by-thread.