What July 15 Means for Turkish Society

There have been some studies analyzing the psychological aspects of the coup attempt and its perpetrator. All these studies show that FETO is still perceived as the most dangerous terrorist organization by people and it differs from other organizations by choosing extraordinary methods against the state. 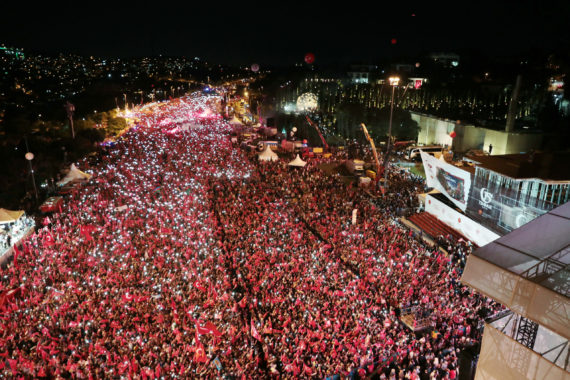 Two years ago, Turkey witnessed the coup attempt by the Fetullah Terrorist Organization (FETO), which had been infiltrating critical state institutions for a long time. The putschists killed 241 people and 2195 others were injured. During the two-year period after the coup attempt, there have been serious investigations towards FETO-linked people in public institutions and the judiciary. These investigations aimed to purify state institutions from FETO domination.

After two years, understanding the attitudes and perceptions of people towards FETO is important. There have been some studies analyzing the psychological aspects of the coup attempt and its perpetrator. All these studies show that FETO is still perceived as the most dangerous terrorist organization by people and it differs from other organizations by choosing extraordinary methods. For instance, while it pretends to be “a peaceful religious community working for the sake of humanity” in the international arena, the members of this terrorist organization still manipulate investigations to commit more crimes. The complication of their methods in communication and giving orders still make them one of the most abnormal terrorist organizations in history.

All of these factors keep the hatred towards FETO among Turkish people alive. The second commemoration of the coup attempt took place with the participation of millions of people throughout the country. In cities, people prayed for the souls of the martyrs and the sake of Turkey. They also showed their anger and hatred towards FETO. This shows that there is a consensus among people, no matter their ideology or political view, that FETO is a dangerous terrorist organization, which does not hesitate to act against human dignity.

The hatred towards FETO makes July 15 one of the most critical junctures in Turkey’s history. After the coup attempt, millions of people gathered for democracy watches in order to show their respect to Turkish democracy. These events created a new atmosphere uniting people all around the country. The participation to commemoration ceremonies in masses shows that this spirit is still alive after two years. Thus, it is obvious that July 15 created a founding spirit for the future of the country.

Even if there is a consensus on July 15 and its meaning in Turkey’s history among Turkish people, there is a concern among people that foreign countries failed to understand FETO danger. The two-year lasting process after the coup attempt shows that foreign countries are not aware of the dangers of this terrorist organization. Obviously, one of the reasons of this misperception arises from the widespread belief among these countries indicating that this organization is not as dangerous as Turkey claims.

Since FETO is a multi-faced terrorist organization showing its “soft” and “peaceful” face to foreign countries, most of these countries are blind to see connections between this group and the July 15 coup attempt. This makes it difficult to fight against FETO in the international arena. Additionally, some groups in Turkey also try to soften perceptions against this group under the influence of the discourse of FETO. Nonetheless, it should be reminded that some Western countries – in comparison to their attitudes two years ago – have begun to take into account the role of FETO in the coup attempt. This reflects some success in Turkey’s fight against the terrorist organization.

Consequently, Turkey proceeds to convince other countries about its two-year lasting fight. The unquestionable consensus among Turkish people on FETO’s role as the perpetrator of the coup attempt also started to re-shape the approaches of foreign countries. It is obvious that, with the support of the people, Turkey will continue to progress in its fight against FETO in the domestic and international arena.