The Turkish issue has taken up so much space in European politics and the public agenda, combined with the fact that so many negative perceptions about Turkey are floating in the air, constitute a serious obstacle to European countries and the EU's rational policy monitoring of Ankara. 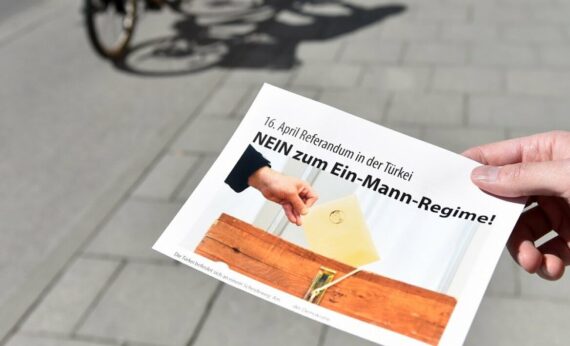 The hotly debated referendum on Constitutional amendments that is to be held on April 16th is not confined within Turkey alone. It also happens to be one of the most important topics that leads the debate among European politics within the framework of the referendum in Turkey.

Why are the European countries and the politicians of the EU so anxious about the amendments to the Constitution in Turkey?

The fact that Turkey’s politics has attracted so much interest in Europe is nothing new. In fact, developments in Turkey have always been important for Europe. This is because since the last days of the Ottoman Empire, a number of European countries have often struggled to exercise influence over Turkey. When looking at the late 19th century and the beginning of the 20th century, the Ottoman state was the subject of the struggle for influence between England, France, Russia, and Germany. The Republic of Turkey, which was established as the Ottoman Empire’s successor, formed into a sphere of influence for German and British politics until the Second World War where it remained under the influence of the United States.

During the post-Cold War era, the influence of the EU on Turkey increased substantially with Germany in particular taking the lead and in direct competition with the US. With Berlin making headway to penetrate Ankara, the institutional structure of the EU and the nature of Turkey’s relations with the EU being the point in question.

There were two important reasons behind the efforts of the Western powers to include Turkey in their spheres of influence: First, Turkey’s weaknesses in economic and military affairs over the last 150 years had allowed the possibility for these countries to influence its politics. Second, the fact that Turkey is straddled in a uniquely strategic location between the Middle East, the Balkans and the Caucasus has made it a country necessary to be controlled by these states.

It can be seen that the interventions of Europe have consistently tried to direct the politics of Turkey and this effort changed shape according to the international conjuncture. In some periods, the European countries that faced off Istanbul / Ankara with demands for land also showed themselves as the forces that helped to “protect” the territorial integrity of Ottoman / Turkey in other periods and portrayed themselves as the forces that demanded the opposite in various ways. In both cases, they have influenced Ottoman / Turkish politics and have tried to manipulate this for their own agenda.

European intervention in Turkish politics continued well after the Second World War. These interventions sometimes came directly in support of the various coups that took place in Turkey, and sometimes by way of pressure on Ankara under the guise of human rights and democracy. At times the UN has also given support to terrorist organizations that have threatened Turkish security and have also created circumstances designed to corrode the economic activity of Ankara.

Europe on the “No” Front

Defaming undesirable politicians, keeping a tab on the local media and using that media to create a smear campaign against Turkey have become increasingly popular methods of the Europeans to topple those that they are against in Turkey. Their aim is to discredit the politicians that are their chosen targets, overthrown by way of elections, with the goal of having them replaced with those who are easier and more open for manipulation.

Since the cost of overthrowing politicians – which cannot be changed through the polls – have become a heavy financial burden, their primary objective has been manipulation of the electorate by media campaigns.

Within this framework, it is evident that many circles in Europe have made their position on the referendum clear and have shown support for the “no” campaign. Turkish politicians and NGOs opposed to the constitutional change are freely permitted to work for the campaign whilst Turkish ministers and other senior politicians of the AK Party have been prevented from participating in events among the Turkish diaspora in Europe on the grounds that “Turkish politics should not be carried into Europe.”

Despite the fact that the PKK is designated as a terrorist organization in Europe, it has held rallies in favor of the “no” campaign there, yet the Turkish Foreign Minister Mevlut Cavusoglu was barred from addressing Turkish citizens at the Turkish Consulate General in Rotterdam, with the Dutch government also refusing permission for his plane to land in the country. Yet again, Germany failed to intervene in a rally of the terrorist organization PKK, with posters of Ocalan and other slogans and symbols of the terrorist organization clearly on display despite the fact that the German Interior Ministry had prohibited these only days earlier. In addition, Fatma Betul Sayan Kaya, Minister of Family and Social Policy, meeting with Turkish voters in Rotterdam was hindered by violence, detained by the Dutch police at the consulate before being deported to Germany, as Turkish supporters of the minister who had gathered in protest were attacked by police dogs.

Now let’s look at this picture calmly. Turkish government ministers have been prevented from being able to conduct a campaign in NATO member countries of the Netherlands and Germany, whilst the PKK, a terrorist organization, is free to hold a public rally and campaign against the constitutional amendment in Frankfurt, Germany, another NATO member country. Whilst the ringleaders of the terrorist organization were freely able to participate in a PKK rally in Cologne, the German Constitutional Court prohibited a meeting organized by Turkish citizens who were supporting the Turkish government protesting the failed coup. This meeting was also to feature a video address by the Turkish President Erdogan that was also banned.

The same Constitutional Court had also ruled that the German authorities could prevent Turkish politicians from conducting election campaigns amongst the Turkish diaspora in Germany, but approved HDP politicians who have an arrest warrant in Turkey on charges of support for terrorism, allowing them to work for the referendum in Germany.

These facts make it explicitly clear that Turkey’s NATO allies have shown preference not with Ankara but with the outlawed PKK, which is the country’s foremost security threat today. Continuation of these policies will undoubtedly be decisive in the shaping of Turkey’s future alliance preferences as well as its general security policies.

At this point, it is useful to look at why Europeans are so enthusiastically opposed to the constitutional amendment. For example, what is the uniting factor that made the German political parties hold hands siding with the “no” campaign in the Turkish referendum? All political parties, from Christian democracies to Social Democrats, from the Liberals to the Greens movement, from the anti-immigrant AfD to the extreme leftist Die Linke, are making an effort in order for the Turkish people to reject the constitutional amendment. The voices that say, “The referendum to be held in Turkey concerns Turks, let’s not break our bilateral relations by interfering with Turkey’s internal affairs,” have diminished so much so that they can hardly be heard.

German television broadcasts debate programs regarding Turkey every evening, insult Turkish leaders with calls for sanctions against Ankara flying through the air. It seems that for years, the campaigns against President Erdogan in the media have surpassed their own personal views and they now believe that they have no other option other than overthrowing Erdogan. They have difficulty recognizing that the majority of Turkish people and Turks living in Europe love and have preferred him again and again at every election. It is clear that they do not want to understand anymore, nor do they hold back in expressing their fury at the choices of the people.

Perhaps the increasing anger is fueled by the Turkish people’s growing love of Erdogan, which has demonstrated the failure of their defamation campaign that they have conducted against him. As prisoners of their anger, this also paves the way for making mistakes in their politics against Turkey. They are now struggling to manage the turmoil they have tried to sow in their own people against Turkey, against their ruling power in Turkey and its people. Anti-Turkish lobby (consisting of dissidents of Turkey and their German sympathizers) in Germany, who are behind this effort, have now become more influential in Germany’s Turkish politics. Blocking the Turkish ministers’ meetings while allowing PKK rallies shows the effectiveness and the power that this lobby wields.

The fact that the Turkish issue has taken up so much space in European politics and the public agenda, combined with the fact that so many negative perceptions about Turkey are floating in the air, constitute a serious obstacle to European countries and the EU’s rational policy monitoring of Ankara. Is there any chance that European politicians, obsessed with overthrowing Erdogan from power, can be freed now from this pathological interest? At this point, it is useful to underline again what this means in terms of Turkey. As far as the current power balances are concerned, the hostile policies of Erdogan-obsessed European countries that are more powerful than Turkey in terms of economic and military, might have the potential to harm Turkey. This damage may be far less than the damage that Turkey will incur at the hands of those who try to “wheel-align” our democracy, often with the support of terrorist organizations such as the PKK, all the while appearing friendly and an ally of Turkey.