What to Make of the June 24 Elections in Eastern Turkey

In the eastern cities of Turkey, where the ethnic Kurdish population is in significant numbers, the competition took place between the AK Party and the HDP in this election. 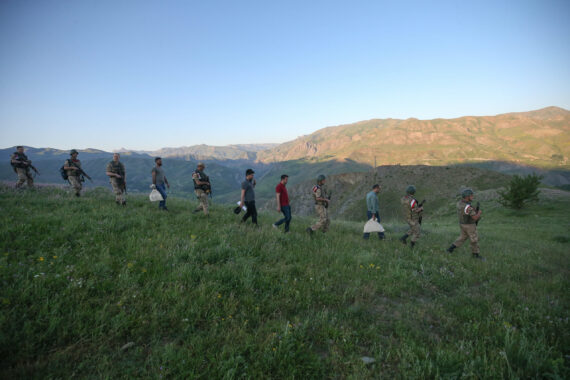 Ballot papers and polling clerks for the parliamentary and presidential elections in company with Turkish soldiers after being transported by military helicopter for security reasons in Van, Turkey on June 24, 2018. Anadolu Agency

The June 24 elections are over. As for the big picture, there is no surprise. Many analysts in Turkey predicted the results before the election day. The day before the elections, you also read in this column that Erdogan was likely to win the elections in the first round but with a divided parliament; the HDP votes, for the first time, would pass the MHP’s, and other projections as such. Nevertheless, the results are still full of depth to analyze, and here we go with a focus on ethnic voting patterns in Turkey.

Kurdish votes were expected to play a key role in the June 24 elections. As for the parliamentary elections, whether the HDP would exceed the 10% threshold would determine the AK Party’s chance to hold a majority in parliament. As for the presidential elections, the Kurdish votes mattered as well, which is natural because in an election that requires %50+1 votes to win, you cannot neglect any significant social segments. These novelties make it necessary to analyze the voting pattern in Turkey’s eastern cities where Kurds are thought to be significant demographically speaking.

The main results of the June 24th elections on these terms are:

In the eastern cities of Turkey, where the ethnic Kurdish population is in significant numbers, the competition took place between the AK Party and the HDP in this election. In the region, speaking of the parliamentary elections:

* these cities are chosen because they appear on the maps of the imaginary PKK state to be separated from Turkey. In other words, this is the area that the PKK calls Bakur (Northern) Kurdistan. In fact, the map is even conservative because some PKK maps also include cities such as Kahramanmaraş, Osmaniye, Sivas where the HDP has no promising results at all.

This column has addressed only one leg of the 24 June elections, parliamentary elections. If we had analyzed not the parties in the parliamentary elections but in the presidential elections, then the AK Party gets even brighter results. Given that Erdogan received more votes than his party whereas Demirtas below his party’s vote, the presidential elections in the region are much better off for the AK Party.

The other findings of the election results are as follows and will be analyzed in the upcoming column:

Eastern Turkey includes a multiplicity of ethnic groups. Other than ethnic identification, political salience of ethnicity also differs across cities in Eastern Turkey. Hence, Turkey’s Kurdish (and non-Kurdish) votes do not act as a block but intra-Kurdish differences prevail in the region.