What Turkey-German Relations Needs is More Realpolitik and Less Ideology

Turkey can rightly expect for the EU, and in particular for Germany, to leave its ideological foreign policy and to act in accordance with new international realities that are defined by multipolarity and rationality. 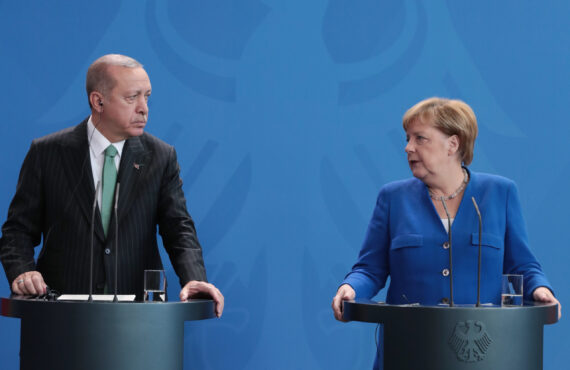 Turkey’s President Erdogan paid an official visit to Germany last week. One of the striking features of the visit was the fact that it came after Erdogan called for extensive reform of the United Nations during his speech at the UN General Assembly in New York. This was a direct challenge to the U.S., which while is the hegemon of the international system, has grown isolationist, unilateral, and offensive in its foreign policy under Trump’s presidency. This isolationist turn undercuts international institutions, which are mainly the products of the U.S.-led liberal international order in the post-WWII era. Erdogan’s call for a new – just and democratic – international organization pointed at the opposite direction of current U.S. foreign policy.

Under Erdogan’s leadership, Turkey has developed a two-tier foreign policy in the last couple of years. On the one hand, it has highlighted the problems of the existing international order and has called for reform. “The world is bigger than five” is the motto of this reformist policy. On the other hand, it has sought to adapt itself to the emerging post-global international order.

The U.S. has started to withdraw behind its borders and has called for the others to take responsibility for global problems. However, important powers such as China, Russia, and the European Union do not show any eagerness to fill the vacuum that the U.S. has emptied. While the world cries for the need that great powers should carry out their leadership role, those powers, which are able to play that role, ignore the call.

Turkey struggles in its attempt to allay the instability by fighting against terrorism and extending its hand to refugees both in its vicinity and in distant places. Turkey also strives to adapt to the emerging multipolar and de-institutionalizing international environment. Alongside increasing its own capabilities to tackle with the dangers of international anarchy, it seeks to multiply and diversify its allies. Different from the past, Ankara tends not to take any side and keeps it options open.

President Erdogan’s recent visit to Germany can be seen in this context of adapting to new international realities. In fact, the German-Turkish rapprochement is a good example of how states seek to adapt to the new multipolar international system. Both Turkey and Germany bear the burden of instability in the Middle East and suffer the refugee crisis that came after it.

More, both countries are the victims of Trump’s trade war. Germany struggles to lay the foundation of a new security order for Europe as the U.S. retreats from sustaining European security. Turkey has the second largest army in NATO and this makes it a significant partner in forming a new security regime in Europe. The economic and political interdependence due to the large Turkish diaspora in Germany also bring the two countries closer together.

Yet the German state’s unrelenting support to terrorist organizations such as the PKK and FETO, bowing to the demand of its anti-AK Party and Turkish civil society and media outlets tends to poison bilateral relations. These negative attitudes create a rather irrational foreign policy for Germany in an international environment where ideology is pushed back to the backburner. In this new international environment, states are supposed to give weight to realpolitik and rational behavior, and thus prioritize security concerns.

However, Germany’s continuation of an ideological critique towards Turkey and its decision to cut economic aid to Turkey (the EU is supposed to provide Turkey with €70 million) do not respect those sensitivities. In turn, Turkey has started to discuss reconsidering its EU membership. President Erdogan stated that Turkey may bring its EU membership bid to a referendum if the EU keeps this anti-Turkey tendency. Turkey can rightly expect for the EU, and in particular for Germany, to leave its ideological foreign policy and to act in accordance with new international realities that are defined by multipolarity and rationality.