What will Turkey Face during the Afrin Operation?

In addition to the military difficulties to be embraced, Turkey has to ready itself for a propaganda war with the terrorist organization. A genuine media strategy by the YPG, in addition to journalists who openly sympathize with the group, will seek to de-legitimize the operation conducted in Afrin. 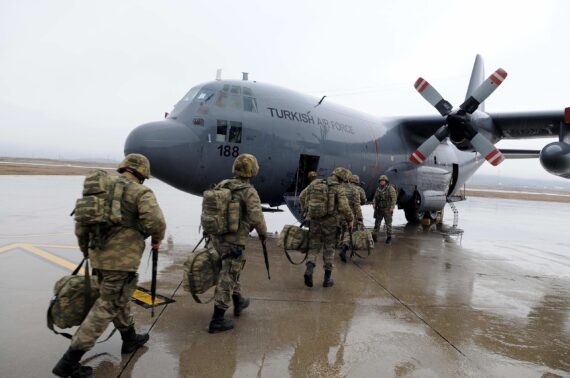 Commandos, dispatched to Afrin to take part in 'Operation Olive Branch,' walk to get on a Turkish Air Force plane at Bingol Airport in Bingol, Turkey on January 25, 2018. Anadolu Agency

Turkey’s President Recep Tayyip Erdogan declared the imminent start of the Afrin operation in order to cleanse part of its southern border from PKK-affiliated YPG terrorists. The Turkish Armed Forces deployed several units to the Turkish border shared with the Afrin region, while the Turkish-backed Syrian rebels in northern Syria, who were part of the Euphrates Shield Operation, also prepared for the Afrin operation.

Operation Olive Branch came shortly after Russia withdrew its soldiers from the Afrin region in order to avoid being shelled by Turkey. The Russian withdrawal was a result of several high-negotiations between the Turkish and Russian Chiefs of Staff – who had previously met in Russia prior to the start of the military operation.

Operation Olive Branch is being conducted with a similar method like Operation Euphrates Shield, which was conducted in order to clear northern Aleppo from Daesh militants. Once again, the Turkish Armed Forces are being accompanied by Turkey-backed Syrian rebels. In contrast to the Euphrates Shield however, the main focus of Operation Olive Branch is to eliminate YPG militants in Afrin. Another difference between the two operations is also the terrain – when compared to Afrin, northern Aleppo is easier to operate as Afrin is located around mountains. More, another difference observed in the two scenarios is that the YPG have controlled Afrin for much longer than Daesh had controlled northern Aleppo.

The YPG has controlled the Afrin region since mid-2012 after the Assad regime plainly handed over the area. The terrorist organization’s control of Afrin was until Operation Olive Branch, as no other faction on the ground had attacked the region. In 2015, the YPG formed an alliance with Jaysh al Thuwwar, forming the so-called Syrian Democratic Forces. At the beginning of 2016, the YPG and Jaysh al Thuwwar captured the strategic Minnagh military airport and Tel Rifaat from Syrian rebels. Russia supported this effort with intense airstrikes. The last expansion of areas controlled by the YPG was during the Euphrates Shield Operation. The YPG took advantage of the immense fighting between Daesh and the Turkish-backed Syrian rebels and by doing so, the group tried to link up with YPG militants in Manbij. Even though the group did not succeed with this strategy, they managed to gather some new territories in northern Aleppo.

The presence of the YPG in Afrin and expanded territories around Tel Rifaat is estimated to have composed of 7,000 militants. In addition to the YPG militants, Jaysh al Thuwwar also has up to several hundred fighters under its command. Especially due to the forceful recruitment in Afrin, the YPG was able to increase its number to the 7,000 based in Afrin.

The depth of the operation

The difficulty of the operation in Afrin also depends on the aims and depth pursued by the government. In general, Turkey seems to have two different options. The first includes the entire cleansing of the Afrin region, which will take time as besieged YPG elements will fight until the very end. Additionally, the mountainous terrain in Afrin will give the terrorist group an opportunity to adopt guerilla tactics against the Turkish Armed Forces and the Syrian rebels. As the YPG is led by PKK veterans who have experienced this type of warfare, this will increase the difficulty of the operation. Within this scenario the operation should not be endangered but will take some time.

The second option includes the possibility of besieging YPG elements in Afrin and to cut any of their links with the world by capturing the Arab-majority areas around Tel Rifaat and Minnag. By doing so, Turkey would also have a route from the Euphrates Shield areas in northern Aleppo towards the rebel-held areas in Idlib. As the YPG forced the Arab population out of their homes in Tel Rifaat and surrounding areas, those areas are sparsely populated. Thus, as the YPG is likely to use civilians as a shield against the Turkish Armed Forces and the Syrian rebels, Tel Rifaat and surrounding areas will be easier to capture.

However, the Turkish strategy seems to intend to capture all of Afrin as Operation Olive Branch began with the aim to capture all strategic hills in the mountains of Afrin. With this strategy, the Turkish Armed Forces and Syrian rebels decided to attack the YPG from its strongest positions. If successful, the terrorist group will lose the possibility to retreat from the villages towards the mountains in order to conduct a guerilla warfare against the armed forces and rebels.

In addition to the military difficulties, Turkey will also face propaganda warfare by the YPG and PKK media outlets as well as from western journalists and analysts who sympathize with the terrorist group. Even if Turkey tries to avoid civilian causalities as seen during the Euphrates Shield Operation in contrast to what Russia did in Aleppo or what the U.S. did in Raqqa, civilian causalities may still occur. However, as part of their media strategy against Turkey, the YPG will propagate by exaggerating any civilian casualties. This can be foreseen and it is inevitable for western media agencies to play a role in this situation. In addition to the western media, UAE-sponsored media will also join the campaign through reporting false news generated by the YPG.

Only days after the start of Operation Olive Branch, YPG-affiliated media sources claimed several fake reports about destroyed Turkish tanks, and the killing/detention of Turkish soldiers and Syrian rebels. Their propaganda was spread on social media and was also shared on the official accounts of the YPG, YPG commanders and YPG-linked websites.

An example of this includes a tweet of the YPG’s so-called political wing, the Democratic Union Party (PYD). The picture tweeted showed a residential building engulfed in flames stating “PYD Rojava” with the caption: “Turkish terrorist army targets civilian homes in Afrin.” Shortly after the post it was discovered that the image was from a fire incident that took place in Kuwait in 2016.

Saleh Moslem, a senior leader of the PYD tweeted: “Turkey massacres in Afrin” with a picture of injured kids. However, it was revealed that the photograph was from the Assad regime’s attacks on Eastern Ghouta.

Also, another picture shared on Twitter claimed that “kids are being targeted by Turkish army.” However, it turned out that the picture was taken from a post on January 1, 2017, during a Russian airstrike on Syria.

Examples of fake-propaganda by YPG sources could be expanded to an innumerable amount. The media strategy obducted by the YPG does not try to be reliable or valid, but seeks to de-legitimize the Turkish-led operation with all means.

The main challenges of Operation Olive Branch will be the terrain in Afrin, which gives the YPG an opportunity to seek defense in the mountains. Nevertheless, the plan of the Turkish Armed Forces is to capture the strategic hills in order to entirely eliminate all YPG militants in Afrin. In addition to the military difficulties to be embraced, Turkey has to ready itself for a propaganda war with the terrorist organization. A genuine media strategy by the YPG, in addition to journalists who openly sympathize with the group, will seek to de-legitimize the operation conducted in Afrin.