What’s Behind the German Public's Mistrust Against Turkey?

According to a recent survey conducted for the German public channel ARD, Germans don’t trust Turkey, while France is the most trustworthy partner. 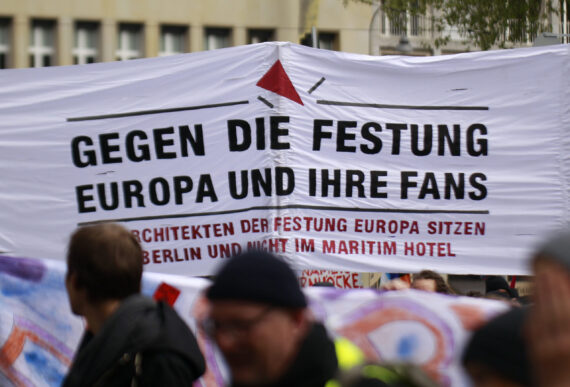 Protesters hold a sign reading "Against the Europe fortress and it's fans" during a demonstration against the right-wing party AfD in Cologne, Germany on April 22, 2017. Anadolu Agency

According to a recent survey conducted for the German public channel ARD, Germans don’t trust Turkey, while France is the most trustworthy partner. Even though the feeling of trust against Turkey, as a partner, increased in contrast to July 2017 by 2 points, only 5 percent of people in Germany hold the opinion that Turkey is a trustworthy partner for Germany. 90 percent of the answers suggest that Turkey is not a trustworthy partner. Turkey’s trustworthiness, according to the regularly conducted survey, was about 17 percent in April 2016. On the other hand, 92 percent of Germans think that France can be trusted as a real partner for their country, while 28 percent trust the U.S. (67 percent mistrust) and 26 percent Russia (67 mistrust).

Normally, the puzzle would be why Germans don’t trust Turkey, or more interestingly, whether Turks trust Germany. However, in this case, it’s better to point out something that became more apparent in recent years.

With no doubt, the fact that Germans don’t trust a country to which 3 million German-Turks have important ties – be it family, emotional, economic, etc – is an interesting phenomenon. Hence, it’s strange that the presence of 3 million Turks or “people with a Turkish background” in Germany is not considered as a positive factor by the interviewees.

But what’s behind the phenomenon that left out positive things in assessing Turkey? It would be too unlikely to assume that people differentiate between Turks living in Germany and the country with which strong ties do exist. The potential argument according to which interviewees just limited Turkey’s trustworthiness to current bilateral or global politics and Turkey’s new political system would also be a false assumption. This is because Turks in Germany are always included into these kind of negative discourses – both led by German media and politicians – whenever a problem occurs in bilateral relations. For instance, it’s striking that the “German-ness of Turks in Germany” is occasionally casted doubt if there is some disagreement between the two countries’ political standpoints. It also seems not very sincere to permanently criticize one country’s political preferences while trusting another country with 92 percent but being collectively silent with respect to its quite controversial political system which is described as a ‘republican monarchy’ (additional 1>; 2).

Thus, the actual explanation why Turkey is not perceived as a trustworthy partner in the eyes of Germans may firstly have something to do with prejudices, and secondly, with rejection.

By prejudices, I mean, the general political bias in German politics and society. Due to a general and deliberate current trend in the Western world, people in Germany also increasingly prefer marginal-extreme right-wing political parties, discourses and their anti-Islamic positions. It’s not a legitimate argument to advocate radicalized positions by stressing so-called “fears” of citizens supporting populist racists. In one of the wealthiest and most “enlightened” countries in the world, it’s quite absurd to hide the seriousness of the issue behind these kinds of downplaying statements. In addition, even though the huge majority of 4,5 million Muslims and 3 million Turks living peacefully in Germany, an increasing number of politicians and (including state-funded) media outlets permanently tense the societal mood by supporting inadequate “experts” who don’t represent an average Turk. Consequently, this broadcasting preference and political atmosphere supports already existing prejudices.

The second problem is the rejection of people as they are. By this, I mean challenging the preferences of Turks and Muslims living in Germany and their strong ties to Turkey. Unfortunately, it seems that conservative circles and right-wing parties expect Turks to totally break ties with Turkey while calling it, e.g., integration. Even though the German constitution does not request assimilative actions, extreme positions increasingly become pushed into the political center.

Muslims and particularly Turks, who feel both a sense of belonging to Turkey and Germany, deny giving up their (constitutionally-protected) positions, practices, beliefs and so on. And it seems that these wrong expectations cause – due to prejudices supported by broadcasts and populist political discourses – a sentiment of doubt and rejection regarding people and to a country with which transnational ties exist.

Of course, surveys should not be generalized and problems have to be examined extensively. However, one must not close their eyes to prejudices or unacceptable requests – like accepting a superior/guiding culture (“Leitkultur”) – becoming a societal normality and consequently fostering even other international related perceptions. Due to the fact that –above all, pious – Turks in Germany are underrepresented in politics and the media, and that there is a lack of sufficient instruments of expressing their actual positions, prejudices are getting underpinned as well. Thus, while there exists an extremely negative language in politics and media with respect to one specific societal group and its transnationally tied country, then one should not be surprised as to why the number of prejudices increases and the call for rejection gets reinforced.