The announced medium-term program is based on three fundamental pillars: stabilization, discipline, and transformation. 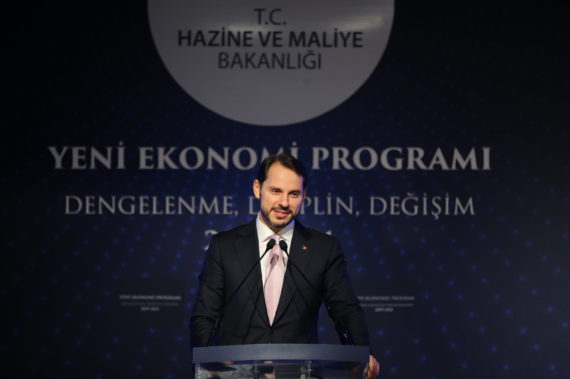 The medium-term program announced is based on three fundamental pillars: stabilization, discipline, and transformation.

In announcing the program, Albayrak stated that the country will activate a comprehensive set of economic policies.

“A Public Finance Transformation Office has been established under the new economic program.”

“We will use all necessary policies and measures to overcome economic challenges.”

“We expect a stabilization process for next year and 2020, so the new economic program aims for 2.3 percent economic growth in 2019,” he added.

The minister also announced that the expected economic growth rate for this year is 3.8 percent.

“The country will set sustainable and healthy economic growth through strategies and measures as announced in the new program.

Albayrak stated that, “Our major intention is to support a stabilization process with disciplined public finance.”

According to the new economic Medium-Term Program (MTP), Turkey is targeting a 1.9-percent budget-deficit-to-gross-domestic-product (GDP) ratio this year, and 1.7 percent in 2021.

“In order to maintain our strong stance in public finance, we have begun to take some measures to ensure the correct use of resources in the public sector starting today,” said Albayrak.

On transformation, Albayrak said that the main target is to focus on value-added areas which will boost the country’s export volume and long-term production capacity.

“You will see the most concrete example of this in investment projects that we will support,” he added.

In creating employment, Albayrak said Turkey will generate 2 million new jobs by the end of the MTP period, with an unemployment rate target of 10.8 percent in 2021.

As of June, Turkey’s unemployment rate was 10.2 percent — some 3.3 million unemployed people — while the number of people employed was 29.3 million.

Albayrak said a specific program of total struggle against inflation would be announced soon.

“Regarding inflation, the Central Bank will continue to use all instruments independently in line with its price stability objective,” he said.

Turkey’s annual inflation was 17.90 percent in August, up from July’s figure of 15.85 percent.

Over the past five years, the annual inflation saw its lowest level at 6.13 percent in April 2013, while the figure reached its highest level last month.

Albayrak also noted that current account gap narrowed significantly this year with the backing of increasing tourism and export revenues.

Turkey’s exports from January to August amounted to $108.7 billion with a 5.3-percent rise year-on-year. As of August, the 12-month overall exports reached $162.4 billion.

According to the Turkish Central Bank, Turkey’s current account deficit in July — $1.75 billion — showed an annual down of 62.8 percent, while the 12-month rolling deficit reached $54.6 billion as of July.

Turkey’s annual current account deficit in 2017 was around $47.5 billion — around 5.6 percent of the country’s GDP.

As noted in the new MTP, tourism services, including health tourism, will be diversified to increase tourism revenues, while the program aims to generate travel income of $42 billion in 2021.

In the first half of this year, over 17 million foreigners visited Turkey and spent some $11.5 billion. Last year, the country’s tourism income was some $26.2 billion while the number of visitors was 38.6 million.