What's Next For Israel After the Elections?

The unexpected move from the new far-right Israeli government regarding the status of Al-Quds or the annexation of new Palestinian lands should be faced with a solid and viable opposition from the whole Muslim world, with a possible lead from Turkey and Iran. 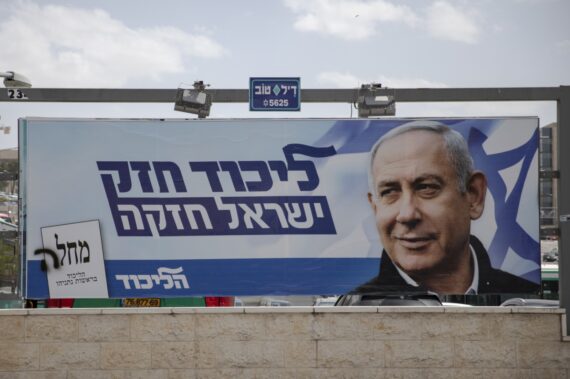 A poster of Israeli Prime Minister Benjamin Netanyahu is hanged on a wall prior to the early general elections, which will take place on April 09, in Jerusalem on April 08, 2019. Anadolu Agency

After announcing the final results of the elections in Israel, it is highly expected that the new government will be even more radical in terms of its foreign policy and its relations to the Arab citizens in Israel – of which a majority boycotted the elections. The boycott was retaliation to the campaign against Arab politicians and the Netanyahu alliance with anti-Arab extremists, who have been calling for a new law to accept Israel as the homeland of Jewish people alone.

The results indicate that Israeli society is slowly moving towards the right and that religious parties are gaining more votes compared to leftist and traditional parties, which have historically been more open to a peace process with Palestinians – such as the Labour Party, which has decreased its sphere of influence in the political realm after gaining only 6 seats.

In this election, where the competition took place between two right-wing parties, the religious and ultra-orthodox parties will have the final say in forming Netanyahu’s new government, with chances of supporting any expected decisions for ‘annexing’ lands from the West Bank and for upgrading more racist slogans and treatments against Arabs.

Sources inside the White House have said that the expected “Deal of the Century” will include a state of limited sovereignty on 90% of the West Bank and East Jerusalem.

There are also speculations that the so-called “Deal of the Century” will start its process immediately after forming the new Israeli government, as U.S. National Security Advisor John Bolton said on Wednesday that the U.S. administration will roll out its long-awaited peace plan in the “very near future.” The Trump administration gave precious gifts to Netanyahu, who thanked Trump’s “tremendous support” for Israel, including the Golan recognition, and his stance against the Iranian regime, including his decision to place the Iranian Revolutionary Guard Corps on America’s terrorist blacklist.

Sources inside the White House have said that the expected deal with the Palestinians will include a state of limited sovereignty on 90% of the West Bank and East Jerusalem. Some land occupied by Israel in 1948 can also be added to it. Further, Israeli forces will be deployed in critical zones in the West Bank. Daniella Weiss, a leader in the far-right (partners to Netanyahu), said that a plan of an additional 1.5 million Jewish citizens will be proposed to the government. The deal will also reject the right of return for Palestinian refugees and will compensate Jordan for giving them land, housing and granting them nationality, with a sum of USD40 billion.

This unlimited support from Trump’s administration to Netanyahu is combined by the reality of a divided Arab front, as Arab leaders are secretly scrambling to gain stronger relations with Israel and Trump to form a front against Iran. This paves the way for the Israeli far-right to draw the new map of Israel, on the expense of Palestinians and Muslim rights in Palestine and control over holy sites.

An unexpected move by the new far-right Israeli government regarding the status of Al-Quds or the annexation of new Palestinian lands should be faced with a solid and viable opposition from the whole Muslim world, with a possible lead from Turkey and Iran.

The election result in Israel should alert decision makers in the Muslim world, anticipating the next Israeli move towards the Muslim holy places in Palestine, as the so-called Deal of the Century is not far from the process of making alliances in the Middle East. This is especially relevant in regards to re-drawing maps of influence and allowing Israel to gain the upper hand in coalition-making as Gulf countries are ready to make concessions for Israel and the Trump administration in return for containing Iran’s influence in the region. More, Egypt is ready for an increasing Israeli role in exchange for an extended coalition in relation to gas projects in the Eastern Mediterranean.

This soft regional pressure on Israel and the more advantageous position it gained during the last decade empowered the far-right wing in the last election, as giving concessions to the Palestinian and Israeli Arabs within the Green Line has increasingly become an unrealistic option. However, the unexpected move from the new far-right Israeli government regarding the status of Al-Quds or the annexation of new Palestinian lands should be faced with a solid and viable opposition from the whole Muslim world, with a possible lead from Turkey and Iran.