It seems that in cases when a decision made by the Erdogan administration is ruled out by a judicial body, those western media outlets stay silent. No critical voice has questioned why the judiciary acts against the government, or why the Turkish judiciary still acts in an entrenched (Kemalist) ideological way. 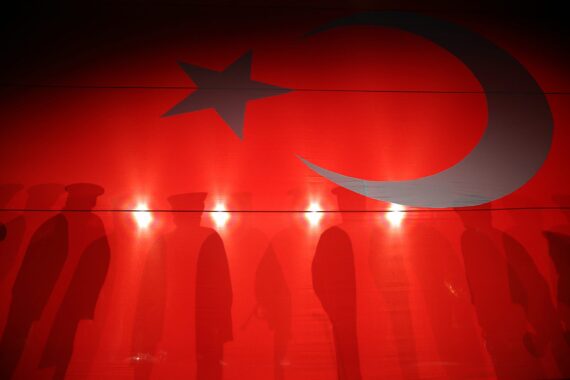 People stand under a Turkish flag while commemorating the second anniversary of the failed July 15 coup attempt. Anadolu Agency

Recently, Turkey’s Council of State, which is the highest administrative court in Turkey, canceled the removal of the so-called Student Oath in Turkey’s schools. That is to say, the court reinstated the oath. Until 2013, reciting the Student Oath in the morning by students in schools was an obligatory act. Although such kind of a militarist-like scene occurred in Turkey, no political party attempted to remove this practice.

Nevertheless, during Recep Tayyip Erdogan’s third period as Prime Minister, the Student Oath was abolished on the basis that it was against the self-awareness and self-realization of students. As The New Turkey columnist Hazal Duran recently addressed in depth, Turkish children going to schools had to –and maybe once again will have to in the near future– proclaim the oath as followed:

“I am a Turk, honest, and hardworking. My principle is to protect the younger to respect the elder, to love my homeland and my nation more than myself. My ideal is to rise, to progress.

My existence shall be dedicated to the Turkish existence. How happy is the one who says “I am a Turk!”

Has the Council of State acted as an executive body and de facto enabled the re-introduction of the controversial Student Oath?

In my opinion, this recent development has to be analyzed by taking into account four main points:

First of all, the question arises as to whether the Council of State has a legal basis to decide on whether an executive act, namely the removal of the Student Oath by the Turkish government in 2013, can be canceled. By this, the court acted like an executive body and de facto enabled the re-introduction of the controversial oath. It done this by ignoring the government’s field of authority and responsibility.

As several members of the ruling AK Party and legal circles rightly underscored (*> ; **), the Council of State’s decision to rule out the current regulation is based on a rather ideological and non-constitutional nature. In addition, the Council of State does not have a legal base to impose executive decisions, and the decision made does not comply with an accurate legal method.

It’s interesting that the decision on Student Oath was made at a time when the conservative democrat AK Party and the nationalist MHP were on their way to continue their alliance for the local elections in 2019.

The second point that I want to emphasize is the fact that while some circles welcomed the decision made, some groups rejected it. It’s also interesting that the decision was made at a time when Turkey’s main conservative democrat party, the AK Party, and the nationalist MHP were on their way to continue their two-year lasting alliance, this time with regard to the local elections in 2019. However, as of Tuesday it became clear that this will not happen. Disagreement on the oath issue was probably an additional factor to this.

Conservative circles and even nationalists with a conservative background and critical stance towards Kemalism protested against reinstating the Student Oath.

While MHP welcomed the decision on Student Oath, the AK Party criticized it. In this sense, this and similar issues bear a continuing conflict potential regarding the future of the fragile “People’s Alliance.” In addition, and as predicted, secular-nationalist CHP circles also welcomed the decision. Conservative circles and even nationalists with a conservative background and critical stance towards Kemalism protested against reinstating the Student Oath. Besides these main circles, Kurdish nationalist and liberals were also against the decision made.

While Kurdish nationalists particularly elaborate the oath as exclusionary, liberals reject it due to its imposing character and nature against, above all, the freedom of opinion. “While the latter one can be debated, whether we like it or not, rejecting the “Turkishness” incapsulated in the constitution is a rejection of Turkey’s constitutional citizenship feature as a modern nation state. In a similar sense, Kemalist circles deny that the Turkish identity named in the oath is racist, which is actually true.

While Kurdish nationalists particularly elaborate the Student Oath as exclusionary, liberals reject it due to its imposing character against, above all, the freedom of opinion.

But the disturbing point in this issue is whether a daily proclamation of the oath, which resembles militarist ceremonies, has to be an obligation or necessity in the education of Turkish children. It’s also a false effort to equate the constitutional Turkishness with ethnic identities. But this interesting topic would go beyond the borders of this column and one would have to make additional comparisons with other democratic nation states such as Germany or France, where similar identities are used.

My third point about the Student Oath’s main controversial aspect has to be elaborated and addressed openly in a more critical way. We should be able to do this in the year of 2018. Unfortunately though, this is still – deliberately – disregarded by all major actors. Namely, the reference to a person-based imposed ideology. One might start to ask whether we know any other democratic countries in the world, which have similar constitutional and other ceremonial references to a similar person-based ideology.

The last and final point is about the western media’s disregard and ignorant bias in the past couple of days. While we are generally used to expecting many articles addressing and criticizing Turkey’s judicial system, there have been no critical pieces published that address the court’s anti-democratic decision. It seems that in cases when a decision made by the Erdogan administration is ruled out by a judicial body, those western media outlets stay silent.

No critical voice has questioned why the judiciary acts against the government, or why the Turkish judiciary still acts in an entrenched (Kemalist) ideological way. Thus, the question should be why these media outlets do not criticize this ideological and legally-baseless decision, while falsely associating every judicial decision in Turkey with the President himself. Nevertheless, people in Western countries and those interested in Turkish politics should take these ambivalent and contradictory approaches into account when analyzing Turkey. For this, it would be an advantage to know the country’s complicated dynamics.