What's the Real Motivation Behind Reforms in Saudi Arabia?

The reform initiatives led by Mohammad bin Salman do not aim to establish a genuine democratic regime in Saudi Arabia, but rather increase the authoritarian nature of the ruling class. 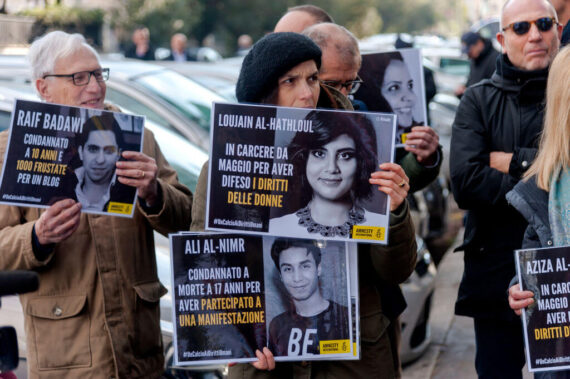 Protesters hold signs during a protest planned by organisations including the Order of Journalists and Amnesty International Italy against the decision to hold the Italian football Super Cup final between Juventus and AC Milan in Jeddah, Saudi Arabia, outside the Embassy of Saudi Arabia on January 16, 2019 in Rome, Italy. Getty Images

Saudi authorities have recently arrested eight human rights defenders who were supporting the women activists whose trial was widely condemned by international human rights groups. This development came at a time when the Saudi leadership initiated a supposedly reform process, which aims to “transform” the country into a more liberal and open-democratic political and social setting. However, many observers have criticized this process and claim that the real motivation behind the reform movement was different.

Saudi Arabia has been seeking some form of reform movement for decades. As the social fabric and popular demands have been under transformation in the country, different segments of society have sought for a new kind of regime. For many years, those demands were neglected by Saudi authorities who were in favor of the status quo. Two important developments challenged this already existing picture.

The 9/11 attacks was the first development in this regard. As 15 of the 19 terrorists who took part in the attack were Saudi citizens, the country came under heavy pressure by Western states. Despite various demands, the Saudi authorities did not deepen the investigation of those who participated in the attacks. But, in order to overcome the pressure, Saudi Arabia initiated a reform program that aimed to decrease the role of religion in society and politics, and re-designed the country’s economy. The late King Abdullah allowed for women to vote and launched a number of reform initiatives in education, religion, and civil society.

For many years, reform demands were neglected by Saudi authorities who were in favor of the status quo. But two important developments challenged this picture.

The second development that forced Saudi Arabia to pursue reforms was the Arab revolutions of 2010. The protest movement that changed the status quo in the Middle East for good was perceived as a direct threat by Saudi Arabia for its regime’s survival. When King Salman came to power in 2015, he accelerated the reform movement in the country. This reform process witnessed its peak when Mohammad bin Salman rose to the most crucial positions in the Saudi state establishment. As a Crown Prince and the de facto ruler of the country, MbS made historical decisions that were initially presented as landmark reforms that could transform Saudi Arabia for good. With the help of a multi-dimensional PR campaign in the West, MbS was considered as the long-waited young man who will transform Saudi Arabia. And for a long time he was presented as such. A number of recent developments however, gave the impression that the real motivation behind the reforms initiated by MbS was different than what was being presented.

Therefore, the so-called reform process in Saudi Arabia has been re-evaluated by many observers. It is argued that the reforms in Saudi Arabia do not aim to establish a democratic country, but rather allows for Mohammad bin Salman to increase his grip on power. This can be seen from the authoritarian nature of reforms that have been in place for the past years. Critics argue that the reforms have been serving to restrict civil rights and liberties, let alone act in favor of them.

By publicizing the image of democratic reforms in the country, the Saudi administration aims to convince the international public that the rights and freedoms in the country have been expanded.

The first motivation of these reforms is to initiate a new economic opening that would allow Saudi Arabia’s ailing economy to foster. Despite its oil-based wealth, the Saudi economy has been facing challenges that threaten the country’s future financially. In order to overcome these problems, the Saudi leadership initiated the 2030 Vision program, which aims to diversify economic activities, including allowing women to work and to integrate the Saudi financial system to the global economy. The Saudi leadership took steps such as allowing women to drive, giving them priority in work places, protecting its citizens in the workforce, and encouraging foreign investment. Such reforms are made to contribute to the country’s economic condition rather than providing democratic rights to its citizens.

Another motivation for the reform movement is to prevent the increasing criticism of Saudi Arabia by international rights groups and Western governments. By publicizing the image of democratic reforms in the country, the Saudi administration aims to convince the international public that the rights and freedoms in the country have been expanded. These efforts have been heavily contested in the eyes of international observers.

What Saudi Arabia needs at this stage is to establish strong democratic institutions, enrich rights and freedoms, enhance civil liberties, and allow its citizens to express their opinion freely and follow a solid economic reform process.

A final reason behind the reforms of Saudi Arabia is to silence the Islamic opposition in the country. Religious figures in the country have been criticizing the regime’s decisions in many issues. This has created discomfort among the Saudi administration and therefore they decided to take action against those who criticize the regime. With those recent reforms, the Saudi leadership is trying to create a perception that the arrest and trial processes of the country’s leading religious figures are legitimate and that these decisions are of great importance for the future of the country. By offering a new and liberal understanding of Islam, the Riyadh administration also aims to create an image of a modern and reformist regime that distances itself from the so-called “radical interpretations” of Islam.

The reform initiatives led by Mohammad bin Salman do not aim to establish a genuine democratic regime in Saudi Arabia, but rather increase the authoritarian nature of the ruling class. It is widely believed that these reform packages will lead to a more authoritarian Saudi regime. What Saudi Arabia needs at this stage is to establish strong democratic institutions, enrich rights and freedoms, enhance civil liberties, and allow its citizens to express their opinion freely and follow a solid economic reform process. This will not only benefit Saudi Arabia, but will also benefit the greater Middle East.