The only hope for a new start is Trump’s unpredictability. Another u-turn in American policies toward Turkey can save a sinking alliance, but time is running out. Somebody should tell Trump that when a super power goes rogue, everything goes wrong. 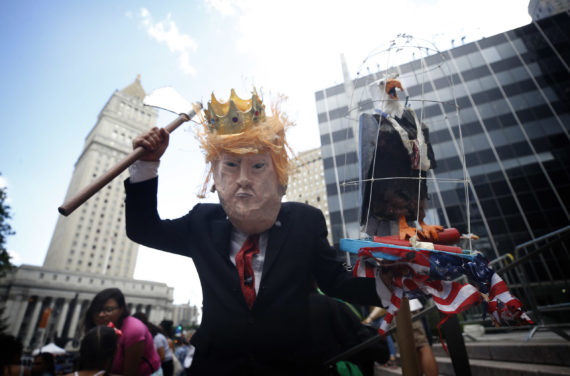 A man dressed in a mask as depicts US President Donald Trump holding an axe as people stage a "Suitcase Solidarity" protest in support of those deported by the Immigration and Customs Enforcement (ICE) division of the Department of Homeland Security offices at the outside 26 Federal Plaza in New York City, United States on July 26, 2018. Anadolu Agency

For some, rogue states are known for their irresponsible, unpredictable and irrational modes of behavior. They develop programs for weapons of mass destruction (WMD), fund and support terrorist organizations, and threaten U.S. allies or neutral states. Further, they are ruled by strong men (I cannot reckon any rogue state being ruled by a strong lady) whose relations with foreign powers are quite worrisome even for their own citizens.*

Who is today’s most famous rogue state then? A government that seems to be irresponsible, irrational, and unpredictable? A government with an ever-growing WMD capacity? A government violating human rights, let’s say by separating immigrant families and putting them in cages? I feel like the shade is fading away but let’s make it even simpler. A government funding, training, and supporting (with all the possible means) a terrorist organization? A government that threatens the US allies? Still have no answer? Well, let’s put it in perspective then.

The U.S. under the Trump administration is not shy at all to threaten its adversaries, even with a nuclear war. Yet, the problem grows even bigger and more peculiar when the Trump administration threatens the allies of the U.S. Trump was quite frank in his criticisms, and at times, threats toward Europe ranged from NATO member states to German carmakers. Turkey has received quite a deal of these threats as well. Furthermore, Trump and the Congress have also initiated a series of sanctions against Turkey. Nevertheless, these sanctions are so minor in comparison to what the Trump administration has already done so far. Trump administration’s support for the PKK’s Syrian branch PYD has harmed Turkey a lot more than the proposed U.S. sanctions ever can.

The U.S. has built a factory of terrorism in Northern Syria where the school kids learn to worship Abdullah Ocalan, the leader of the PKK (which is designated as a terrorist organization by the U.S.). The schools at Hasakah, Qamishli, Kobani teach local children the life of Ocalan as a role model and all this is possible with U.S. approval and support. It is beyond sanity. The PYD’s propaganda faces give interviews to Western media for “the Rojava revolution”(!) but are known in Turkey for plotting terror attacks. Even U.S. officials accept the fact that the PYD and PKK are no different. What is crystal clear is the fact that the U.S. is supporting a terrorist organization against an ally.

I wish that was all. But the very same U.S. government is also rejecting Turkey’s demands to extradite Fetullah Gulen. Gulen is a Turkish citizen living in the U.S. and he is the leader of the 2016 coup attempt in Turkey, an attempt that killed 250 Turkish citizens, bombed the national parliament, and attempted to assassinate the elected president of the country. How is it that the leader of the coup attempt is being hosted by the U.S.? And the very same government threatens Turkey for not releasing an American citizen who is under trial for charges of being linked to the Gulen network (FETO) in Turkey. After all, the U.S. is an important country, either as an ally or as an enemy. It is even more important when it goes rogue and reckless.

Turkey would very much like to see the U.S. on its side. But Trump administration is doing its best to kill the last hopes for conciliation. The U.S. is already cultivating a terror organization against Turkey in Syria. It is, furthermore, hosting Turkey’s most wanted and dangerous man in a way in which he can continue his campaign against Turkey from his safe mansion in Pennsylvania. Under such circumstances, further American threats and sanctions do not change the nature of the relationship. Under such circumstances, the only hope for a new start is Trump’s unpredictability. Another U-turn in American policies toward Turkey can save a sinking alliance, but time is running out. Somebody should tell Trump that when a super power goes rogue, everything goes wrong.

*Yet for some others, being a rogue state is a strategic choice in deterring adversaries. Accordingly, rogue states keep bothering the US while trying to deter a direct American action at the same time. There is also a third camp on the concept of rogue state. For this third camp, there is no such thing as a rogue state. It is regarded as a simple discourse that the U.S. contrived to create a new enemy in the post-Cold War era. Allegedly, this “fabricated” enemy would help the U.S. justify its overseas engagements including military operations. I will omit these two understandings of the term and stick to the first usage.