A group of men had flown into Turkey a day before Khashoggi’s entrance, and left Istanbul on the day of the event (after Khashoggi’s disappearance). According to a source that spoke to the Middle East Eye, “There was no attempt to interrogate him. They had come to kill him.” 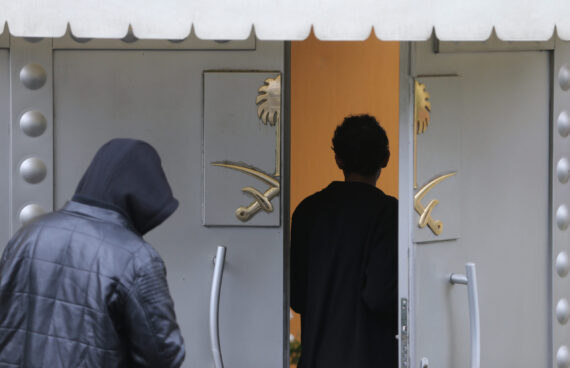 A man enters the Saudi consulate as the waiting continues on the disappearance of Prominent Saudi journalist Jamal Khashoggi in the Consulate General of Saudi Arabia in Istanbul, Turkey on October 17, 2018. Anadolu Agency

Recent sources that have been secretly released to the press confirm the fact that the Saudi journalist was killed in the Saudi consulate in Istanbul – in the room of the General Consul.

According to reports that have been leaked to the press, Khashoggi was wearing an Apple Watch on his visit and this recorded the events that occurred. A recording that was then automatically uploaded on his iCloud revealed that the journalist was killed – in fact, chopped into pieces while still alive in a seven-minute execution session.

A group of men had flown into Turkey a day before Khashoggi’s entrance, and left Istanbul on the day of the event (after Khashoggi’s disappearance). According to a source that spoke to the Middle East Eye, “There was no attempt to interrogate him. They had come to kill him.”

His murderers are reported to have listened to music on their headphones while dismembering his body.

The Saudi General Consul in Istanbul fled the country yesterday (16 October) after the UN Human Rights chief called for his immunity to be stripped in order to be able to question him within the current investigation being carried on.

While Pompeo confirmed that the U.S. will support Turkey in its investigation, other items such as the Syrian Civil War, the PKK/YPG and the Manbij deal were also on the agenda.

Within the scope of the investigation in regards to Jamal Khashoggi’s disappearance, the Turkish authorities will enter the Saudi Consul’s residence in Istanbul.

While the authorities intended to enter the residence yesterday, M. Cavusoglu told reporters tht they couldn’t as “the Saudis claimed that his [consul’s] family were inside.”

The question as to where the remains of Jamal Khashoggi are still remains unanswered. The Saudi regime have insisted that they do not know the answer to this. However, the international community are pretty much aware that the Saudi diplomats in Istanbul would have not been able to pursue such an act without the knowledge of Riyadh.