Where does Iran and Russia stand in Afrin?

Iran’s red lines concerning intervention in Syria are the presence of the regime and the securing of the resistance line. As Turkey does not directly threaten these concerns, it is possible for Tehran to be more empathetic to Ankara's priorities in Syria. 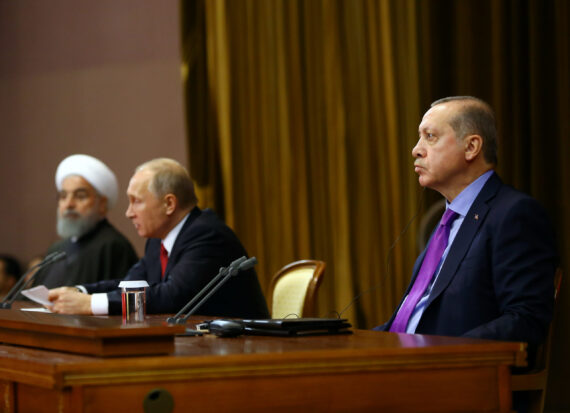 The military operation Turkey launched in Afrin, Operation Olive Branch, officially kicked off on 20 January with air raids conducted by Turkish jets against the terror group, the PKK, and its Syrian offshoot, the People’s Protection Units (YPG). Prior to this, Turkish authorities had already expressed on various platforms that the Afrin operation would be launched. Two weeks before the operation began Syrian regime forces initiated a large-scale assault in Idlib soon after the Khmeimim Air Base, which is currently operated by Russia, came under mortar fire and was attacked by unmanned aerial vehicles (UAVs). Idlib is among the de-escalation zones agreed on during the Astana process. However, the influence of several groups in the region, including Tahrir al-Sham, which is reportedly linked to Al-Nusra Front, has created ambiguity concerning the policies to be implemented regarding these groups. Tahrir al-Sham’s presence in Idlib is occasionally underlined by the U.S. and is employed to legitimize various policies concerning the most significant area Turkey has influence in Syria.

The multifaceted attack involved simultaneous use of a large number of UAVS and targeted Russia’s military presence in a region, which according to the Astana talks, is under the watch of Turkey. A crisis between Turkey and Russia was avoided as Russian President Vladimir Putin stated that he knew who was behind the incidents and that Turkey was not involved. Consequently, as well as disrupting Russia’s military presence, the motive of the attack may have been to hamper the cooperation between Turkey and the countries involved in the Astana process. Certain steps, such as Russia opening the air base it controls in Syria to Turkish jets during Operation Olive Branch, indicates that mutual trust between the two countries is gradually improving. It can also be observed that Russia seems to comprehend Turkey’s concerns within the context of the operation and regards the U.S. accountable for the incidents, as the U.S. provided the YPG weaponry.

Turkey kicked off the operation in order to purge terrorists deployed in Afrin, which is geopolitically crucial for Ankara. More importantly, the fact that Turkey has specified Manbij as the second target, where U.S. troops are currently deployed on the ground of repelling the Daesh threat, may lead to a serious crisis between Turkey and the U.S. In addition, the U.S. recently announced that it plans to form a new “North Army” at the southern border. While U.S. Secretary of State Rex Tillerson and the Pentagon subsequently modified the initial announcement, it was also stated that a 30,000-strong new border security force, answerable to the “North Army” would be established in order to protect Syria’s borders with Turkey, Iraq and Jordan. The force was planned to control passes at the northern, eastern and southern borders of Syria and to cut Syria’s ground liaison with its neighbors other than Lebanon (and Israel).

Grounds of the Afrin operation

Turkey has a number of concrete reasons to launch the Afrin operation. Firstly, and most importantly, the region poses an immediate threat to Turkey’s national security. It is well known that a large number of PKK militants passing the border through this location have been trying to turn the Nur Mountains in south-central Turkey into a terror base. As seen over the past couple of months, the terror group went as far as to infiltrate the interior zones of Turkey such as Fethiye and Mugla. Consequently, Turkey’s fight against the PKK can be extended to different regions and different ways of fighting can be employed as the group ends prioritizing Syria or receives orders from the power groups it is affiliated with.

Another ground for the operation is related to Afrin’s geographical location. If the terror group attempts to form a corridor that reaches the Mediterranean by making use of the chaos in Idlib, Afrin is the only area that will allow for such a corridor. The PKK previously adopted a similar opportunism and seized control in Manbij by taking advantage of the chaos that emerged during Operation Euphrates Shield. When U.S. diplomats in Washington also began to support the YPG along with military officials in the field, Ankara reached the end of its tether and decided to start the operation.

Currently, Turkey believes that it is meaningless to waste more time to convince the Trump administration. More, Ankara intends to demonstrate that it has increased its power in the field and has left behind its domestic crises that peaked in July 2016, and which shackled the country in many aspects including the Syrian issue. The Syrian Civil War has illustrated that forces who cannot actively launch operations in the field do not have any influence on the negotiation table, whilst their most fundamental security concerns are not taken seriously even by their allies. Turkey eventually kicked off the Afrin operation, which had already been delayed for a long time, in order to eliminate the threats posed to the country’s internal security and in order to display a stronger presence on the negotiation table in the subsequent phases of the Syrian crisis.

Effects of the operation on Iran-Turkey rapprochement

Iran is undoubtedly another country that has close interest in the latest developments in the region. Although the country has recently been on the agenda due to the street demonstrations in its various cities and towns, Iran is still closely following the developments regarding Syria and the Shia militia commanded by the administration is still maintaining its activities. Tehran was pleased to see that Turkey updated its Syria policies with the Astana process in early 2016. Since then, Turkey and Iran displayed similar attitudes on various regional issues including the referendum in Iraq and the blockade on Qatar. Turkey’s recent rapprochement with Iran has played a role in Ankara’s clear stance with regard to the latest incidents in Iran. Otherwise, it was discerned with whom the conflicts and chaos in the region favor.

Turkey’s military intervention against the YPG, which had turned into a U.S.-paid army and which had seized control in a substantial part of Syria, especially towards the Iraqi border by going beyond the traditional Kurdish geography, may be interpreted from different perspectives by Iran. First, Tehran criticized Turkey’s intervention since the outbreak of the Syrian crisis and emphasized the “sovereign rights” of Syria. Defending its own and Russian presence in Syria on the grounds that it was agreed with the Damascus regime, the Tehran administration asserted that all kinds of interventions by Turkey and other countries lacked legal ground.

In this context, Iranian Foreign Ministry spokesman Behram Kasimi’s statement that Iran is concerned about Turkey’s Afrin operation and Iranian Chief of Staff Mohammad Bagheri’s emphasis on Syria’s territorial integrity are not surprising. However, aside from the official statements and diplomatic expressions, it is obvious that the operation will drive a wedge between Turkey and the U.S. and lead Ankara to align itself with Russia and Iran. Therefore, it would be unreasonable to expect a practical reaction from Tehran towards Turkey’s military operations in limited locations such as Afrin and Manbij. As a matter of fact, the Iranian administration knows that it is not the only determinant in Syria and that it is not realistic to expect the regime to control the entire country at this phase. By any means, Tehran is aware that it needs to cooperate with a country or a power group. Given Iran’s sensitivity to the presence of the regime and the “resistance line,” the country is unlikely to give a harsh reaction to Turkey’s presence in Syria.

Although Turkey mostly underlines the threat posed by the YPG due to the group’s affiliation with the PKK, it can be contended that the group is likely to be assigned to hinder the “Shia belt” in the south. This is of vital importance for Israel and Saudi Arabia considering the relations the group built with Saudi Arabia by means of Raqqa and several Arab tribes largely due to the heavy weaponry provided to the YPG. Given that the “Border Protection Unit” is expected to protect Syria’s borders with Iraq and Jordan, the YPG and its variations can soon head south as they are blocked by regime forces in the Deir ez-Zor and Abu Kamal line. Likewise, it will not be a surprise if the U.S.-backed opponents on the Syria-Jordan border head north in order to completely block the Syria-Iraq border.

Whether Tehran and the groups that it allies with will accept this situation is out of the question as Tehran explains its presence and struggle in Syria through this “line.” In this case, the YPG will become the mutual target of both Ankara and Tehran with different motives and in different regions. Furthermore, the U.S. will expect this new “army” to hinder logistic support sent from land and some groups within the Popular Mobilization Forces (Al-Hashd Al-Sha’abi) commanded by Iran within a possible Israel-Hezbollah conflict, which seems unavoidable yet dubious when it will take place. The situation becomes clearer when considering the fact that the YPG is Washington’s most effective fighting force. Tillerson only recently stated that the key target of U.S. policy in Syria is to decrease Iran’s influence.

It is highly unlikely that Iran will respond harshly to the Afrin operation. As underlined above, Iran’s red lines concerning intervention in Syria are the presence of the regime and the securing of the resistance line. As Turkey does not directly threaten these concerns, it is possible for Tehran to be more empathetic to Ankara’s priorities in Syria. At this point, Turkey’s articulate expression of its intentions and objectives within the context of the operation has been useful. Informing the Syrian regime through a written note before the operation begun also played a major role in toning down the reactions of Iran and Russia.