In order to appeal to all political factions, Aksener has gathered various figures, who are mostly irrelevant and incompatible to each other. The commonality between these individuals is that while they have been active in politics for many years, they have been unsuccessful and, thus, forgotten by the public. 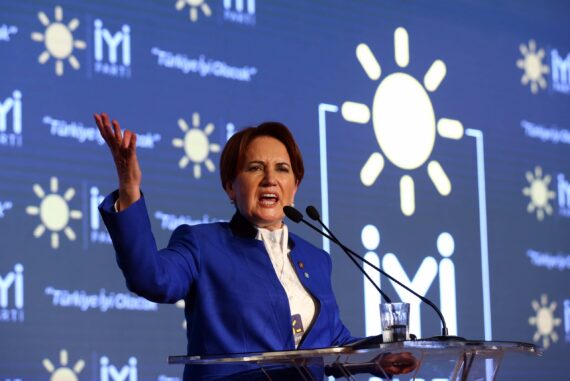 Meral Aksener during her first speech as leader of the Iyi Party, October 25, 2017. Anadolu Agency

Contrary to the conviction of some European journalists, Meral Aksener is nothing like Marine Le Pen. Nor is she anything like the politically ambiguous Macron who ascended to the Elyseé, crushing the French political left and right. First of all, Aksener isn’t a new face – she’s a 61-year-old politician who has been in politics for 23 years. While she was a nationalist, a follower of the Grey Wolves movement in Turkey during her student years, she has been involved with almost all right-wing political parties in Turkey.

Meral Aksener first entered politics in 1994 together with Turkey’s first female Prime Minister, Tansu Ciller. Aksener ran in the mayoral elections in Kocaeli, but lost. On the road to parliamentary elections in 1995, the coalitions formed with the leftist Social Democratic Populist Party (SHP) during the prime ministries of both Suleyman Demirel and Tansu Ciller had left Turkey in ruins. Consecutive unidentified murders were committed, the Turkish Lira lost 168 percent of its value and interest rates skyrocketed to 7000 percent.

As one of the closest aides to Ciller, in 1995 Aksener became a parliamentary candidate for the True Path Party (DYP). Necmettin Erbakan’s Welfare Party (RP) was the victor of the election, while Ciller’s DYP came third. Aksener became the Minister of the Interior during the RP-DYP coalition, which was eventually deposed by the military that was defined as a “post-modern coup” by its perpetrators. Both Aksener and her leader Ciller were targeted by Turkey’s most influential media group, Dogan Media Group. While having previously supported Ciller, Dogan Group began to target her after she formed a coalition with Erbakan. Attempting to protect Ciller in her capacity as Minister of the Interior, Aksener threatened the aforementioned media group: “We’ll find it difficult to hold back the youth fanatical of Ciller. This is my last warning. We will not be held responsible for what may happen.” While there were attempts to revoke Aksener’s parliamentarian immunity after this statement, the coalition government was deposed by the military, which left everything in shambles.

Although the 1997 “post-modern” military coup erased Ciller from Turkish politics, Aksener attained a long-lasting prestige in the field. While the military were briefing academics, high judges and journalists about the government, Aksener, as the Minister of the Interior, had emphasized that she would dismiss any governor who attends those briefings. This stance she took against the military increased the sympathy for Aksener by Turkey’s political right. Following, Aksener joined the reformers (later known as the Justice and Development Party, or AK Party), who departed from Erbakan in July 2001. A couple months later Aksener joined the Nationalist Movement Party (MHP) and became a special advisor to the party’s leader, Devlet Bahceli. Aksener was MHP’s candidate for Istanbul during the mayoral elections in 2004, which she lost. While she was elected as a Member of Parliament in 2007 and in 2011, she was not listed as a candidate by Bahceli in November 2015. Aksener was an ambitious politician, and furious by the acts of Bahceli, she convened to MHP’s extraordinary congress in an attempt to become chairperson of the party. Adding this attempt to her list of losses, she eventually formed her own political party.

Once sympathized by the right-wing for her unyielding stance against the military, Aksener entered a new era accused of being affiliated to the Fetullah Terrorist Organization (FETO). While it was acknowledged as a congregation, FETO was known for being sympathetic towards Aksener. Moreover, it is no secret that FETO encouraged Aksener to become a presidential candidate since 2012. In spite of this, there isn’t any strong evidence about Aksener forming an organic relationship with FETO – the clandestine organization that infiltrated the state offices step-by-step in 40 years and eventually orchestrated the July 15 coup attempt in 2016. Although she had not stated it outright, sources close to her claimed that Aksener told her close friends in the meantime that the December 17-25, 2013, “judicial coup” attempt in Turkey not only shuddered herself but also the whole Parliament. However, strangely thereafter, Aksener took a position that enabled her to be blamed of being a FETO sympathizer, probably due to her political ambitions and calculations for the future. While FETO members were being cleansed from public institutions, Aksener did not only fail to criticize the criminal cult leader Fetullah Gulen, but also rejected the “Hashashin” statements made against him and his followers. Aksener criticized every operation the government conducted against FETO, seizing their assets such as private preparatory schools, banks, media outlets and associations, which funded the terrorist organization with the pretense of humanitarian aid.

Whether willingly or unwillingly, Aksener stood silent for months after FETO’s murderous July 15 coup attempt. It became impossible for her or any other political actor to maintain their positions prior to the coup with respect to FETO. So, Aksener began her statements by saying: “I believe President Erdogan is sincere in his fight [against FETO].” In addition, departing from her previous stance, she included policies about fighting FETO in her party program. Other manifesto promises include ensuring Turkey becomes one of the top ten economies in the world, increasing national income, entering the top 20 countries in PISA listings, decreasing unemployment to under 7 percent within 5 years and realizing a 4.0 revolution in technology industry.

Aksener wants to become president in order to realize the above-mentioned goals. Considering the political landscape of Turkey however, her manifesto promises are highly ambitious – in Turkey today the AK Party retain around half the electoral vote, while the other half is shared between the Republican People’s Party (CHP), MHP and the Democratic People’s Party (HDP).

Hoping to receive support from the Kurdish population in Turkey, Aksener launched her party campaign by visiting Bitlis and Mus – cities in East Anatolia where the AK Party and HDP are the prominent competitors in the region. She rented a house in Bitlis for 650 Turkish Liras and made her first speech: “We will adopt the discourse of love and goodness. I will create projects by listening to you. If I break my promise, you can come and stone my house in Ahlat (a district in Bitlis).” Not giving any credit to rhetoric, Kurdish voters will treat Aksener as their neighbor, but they will not vote for her. Indeed, no one reacted to her statement – not even to the “stoning” part, with strong local motives. In addition to the Kurds, Aksener is also after the Alevi vote. However, their vote is shared between CHP and HDP.

In order to appeal to all political factions, Aksener has gathered various figures, who are mostly irrelevant and incompatible to each other. The commonality between these individuals is that while they have been active in politics for many years, they have been unsuccessful and, thus, forgotten by the public. Although there are a number of new faces, this doesn’t really change anything for the party.

For instance, Ruhat Mengi, a fervent advocate of animal rights, yet lacking the same commitment to human rights, has voiced the Kemalist laicist rhetoric of the 1930s throughout her carrier as a journalist. Mukadder Besegmez, from a completely opposite background, is a traditionalist who comes from Erbakan’s “National Outlook Movement.” Another example is Deputy Chairperson Koray Aydin, who is an idealist that previously blamed Aksener of being a FETO member. Aydin also ran for the chair of MHP twice, and failed.

Individuals that have failed to obtain the leadership of MHP seem to have merged into Iyi Party, as Umit Ozdag, another individual who was unsuccessful in his bid, is now the Deputy Chairperson of the Iyi Party, responsible for media and propaganda. Ozdag’s father was one of the military officers who orchestrated the May 27, 1960 coup, which resulted in the execution of Prime Minister Adnan Menderes and 3 ministers. Ozdag’s father later became a prominent member of the National Unity Committee that administered the country after the coup. Of course, while Ozdag cannot be held responsible for his father’s political past, when asked about this history he replied: “My father was an exemplary Turkish military officer. He was involved in the coup because he believed it to be true.” This is not the only time Ozdag made reckless statements. Only recently he claimed that over 1 million Turks live below the starvation line and that 32.6 percent of Syrian refugees in Turkey are overweight, while 27.7 percent of them are obese. While this statement lacks any logical assessment, according to Ozdag, Syrians are feasting, while a part of Turkey is starving.

While Mengi, Besegmez, Aydin and Ozdag are only a few examples, which illustrate the lack of consistency in the party, there are other individuals in the Iyi Party who served as former ministers of the DYP, Democratic Left Party (DSP) and Motherland Party (ANAP) – all of these parties faded away in the 2002 elections.

Will Meral Aksener be able to ascend to the presidency with this team? This seems impossible. So, will she be able to surpass the electoral threshold? It’s too early to answer this question. In illustration of the inconsistency and ideological emptiness of the Iyi Party, MHP Secretary General Ismet Buyukataman stated: “Aksener reminds me of the character Maho in the 1980s hit film ‘Banker Bilo.’ Maho promised his fellow villagers to take them to Germany and loaded them into the dumper of a truck, touring the whole country for days. When the villagers were unloaded from the truck, they found themselves not in Germany, but on the mountainsides near Istanbul.”