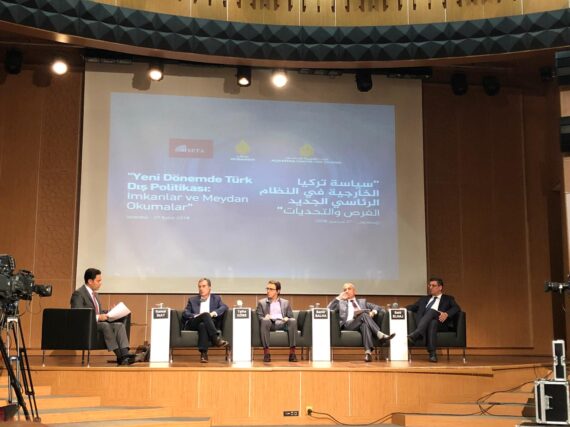 In cooperation with the Al Jazeera Centre for Studies, SETA Istanbul held a panel today discussing the changing dynamics in Turkey’s foreign policy. Under the title “Turkey’s Foreign Policy in the New Period: Opportunities and Challenges,” the speakers were Kemal Inat, Talha Kose, Samir Salha, and Said Elhaj.

Kemal Inat began by stating that Turkey is currently trying to follow an “independent foreign policy,” meaning that Ankara is prioritizing its own interests due to the clash it has found itself in with its Western partners.

Increasingly, Turkey’s Western allies have been falling distant to the threats that Turkey has encountered in terms of fighting against terrorism and the Syrian Civil War that has caused mass migration into the country.

Providing a historical background on the relations between Turkey and the U.S., Inat reminded the audience that the initial beginning of a relationship between Ankara and Washington was during the Cold War era, when Turkey needed the protection of the U.S. against Soviet expansionism.

In regards to Turkey’s attempts to form equal relationships between its allies, Inat also added an “alternative” dimension to the discussions on Turkish foreign policy. Inat stated that it is “natural” for Turkey to seek alternative allies – including Russia – due to its deteriorating relations with its Western allies.

In spite of all discussions surrounding relations between Turkey and the West, Inat also reminded the audience that the European Union is still Turkey’s largest trading partner and that the two blocs are mutually dependent on each other in terms of trade.

In agreement, Talha Kose also mentioned that while there have been ups and downs in the bilateral relation between the U.S. and Turkey, there has never been such a systematic clog.

Kose stated how anti-Turkey lobbies in the U.S. gained power after the Iraq war and were finally at a peak where they had a direct affect on relations between the two countries.

Regional powers that want to maintain the current status quo in the Middle East – namely, the United Arab Emirates, Saudi Arabia, and Egypt – have all maintained good relations with the U.S., while mutual insecurity has haunted the Turkey-U.S. relationship.

Speaking after Talha Kose, Said Elhaj also added the FETO dimension. Elhaj stated how the U.S. support for Fetullah Gulen and FETO has been a major detriment to relations between Washington and Ankara.

Emphasizing that the relationship between Turkey and the U.S. is an important one, Elhaj added that “Turkey does not want to lose the U.S. or NATO.”

Apart from Turkey’s relations with the U.S., Elhaj also re-iterated why some countries in the Arab world support a deteriorated Turkey-U.S. relationship. The reason for this according to Elhaj is due to the fact that “Turkey is a country observed as supporting the Arab Spring.” More, Turkey was very open in its support to Qatar during the Gulf crisis – something that initially went against the interests of Saudi Arabia.