Saad Hariri was forced to read a written speech in advance. He denounced Iran's hold on Lebanon, Hezbollah's weight and the risks that would weigh on his life. This speech amazed everybody including his followers, as none of his earlier statements have suggested a recent threat to his life. It is true that never in the history of international diplomacy had we seen a head of government held in a foreign country and announced his resignation. 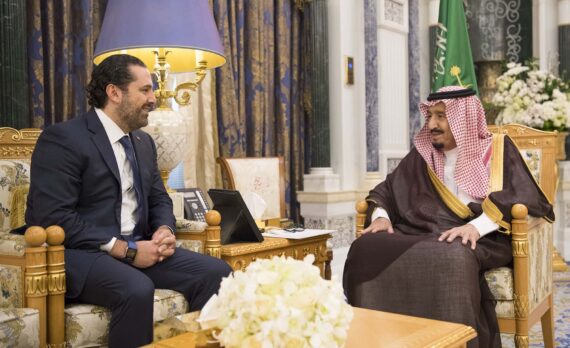 Announced on November 4, the resignation of Lebanese Prime Minister Saad Hariri shook the country and sent a shock wave across the region. Saudi Arabia’s offensive against Iran is now expanding on all fronts with all the relevant risks. But does the young Crown Prince, at the initiative of this strategy, have the means of his policy?

Beirut. It is an understatement to say that the resignation of Lebanese Prime Minister Saad Hariri, announced on Nov. 4 from Riyadh, has taken everyone by surprise here. And the astonishment is in all, both in ordinary people that started to follow the news channels continuously once again, and in politicians and journalists, embarrassed to puzzle out the reasons for this unexpected crisis. Of course, the stability of Lebanon was a complex, uncertain, miraculous alchemy, some said, which surprised all outside observers and the Lebanese themselves. Yet, despite the war in Syria and the influx of hundreds of thousands of refugees from that country and an economic outlook more than worrying, Lebanon seemed to maintain an appearance of peace. The agreement for the election of Michel Aoun to the presidency on October 31, 2016 following the accession to the post of prime minister Saad Hariri and the formation of a government in which the essential political forces, including the Hezbollah, coexisted seemed to guarantee that the country would remain safe from regional turbulence, especially from the cold war between Tehran and Riyadh. And this happened despite an economy in a situation much more worrying than the local or external analysts seem to realize.

So what exactly happened? We now begin to get more insight into the course of events that led to this new crisis. It is on November 2nd that Saad Hariri was invited to Saudi Arabia to meet the King. There was nothing surprising about this invitation as Hariri has dual Lebanese and Saudi nationality and is a frequent visitor to the kingdom where he had gone on October 31. On this visit, we are informed that the authorities then expressed their concerns about the influence of Hezbollah. However, on his return, Hariri seemed, according to his close circle, rather reassured, having explained to his interlocutors that he could not close this party, which possess a great political as well as a military force. Nothing foreshadowed what would follow. He therefore flied to Riyadh without any concern on November 3rd. But as soon as he arrived, he was given an unusual treatment: as the Saudis had asked him to come without any advisor, he was assigned to his villa in Riyadh, deprived of his mobile phone and any means of communication with the outside world. The next day he was seen by Mohammed Ben Salman (MBS), the Crown Prince and son of the King, and summoned to resign. He was forced to read a written speech in advance. Hariri denounced Iran’s hold on Lebanon, Hezbollah’s weight and the risks that would weigh on his life. This speech amazed everybody including his followers, as none of his earlier statements have suggested a recent threat to his life. It is true that never in the history of international diplomacy had we seen a head of government held in a foreign country and announced his resignation.

Why did Saudis, who seemed to hold with the agreement of 2016 for the government of national unity in Lebanon, make this change? It must be seen as the claw of the strongman of the kingdom who, at the same time, consolidated his grip on power by getting rid of his rivals, in a brutal undertaking unprecedented in the history of the kingdom, that some compared, in a much exaggerated way, to a “night of long knives” in Nazi Germany in 1934. But what is the relationship, if any, between the purge in Arabia and the resignation of Hariri? Everyone seems to ignore it.

The establishment of the new presidency in the United States, which has been stating that the fight against Iran- the only relatively clear axis of its foreign policy, has been perceived by Riyadh as an encouragement. MBS developed strong relationships with the president and his entourage and a few days before the crisis his son-in-law Jared Kushner had visited the kingdom. Now, for the new strongman of Riyadh, it is not only a question of stopping the Iranian thrust, but of carrying out a “rollback” policy, a term used by the Americans during the cold war to indicate their will to push back Communism everywhere it settled.

This Saudi war was launched in Yemen in March 2015, with no great success so far and with catastrophic consequences for the civilian population, then continued with the breaking off of diplomatic relations with Qatar in June 2017. It seems that the kingdom has decided to make Lebanon the third ground of its offensive, just as it is developing a charm offensive towards Baghdad, attempting to counterbalance Tehran’s influence. But, for the moment, the results are not very convincing, and there is the impression that the failures of the Crown Prince push him even further, without having measured the real power relations. Even the US administration seems reluctant to follow it on all sides, as it has shown by expressing a certain neutrality in the crisis of Qatar and not hiding its embarrassment at the departure of Hariri, whom it had received at the White House in July.

On the other hand, in Israel, Prime Minister Binyamin Netanyahu does not hide his support for the Saudis. As early as November 4, he was tweeting that Hariri’s resignation should be seen as an awakening call for the international community and a call to take action “against Iran’s aggression aimed at transforming Syria into a second Lebanon as well.” In a message sent to all missions abroad, Israel called its diplomats to support Saudi Arabia. However, a number of voices warn against an exaggerated adventurism, especially since Arabia does not have the military means for a confrontation, which would be the Israeli responsibility. In an article published in Haaretz, Daniel Shapiro, former US ambassador to Israel, published an eloquent title: “Saudi Arabia opens a new front against Iran and wants Israel to do the dirty work.” A conclusion shared by the journalist Amos Harel who notes the risk of a possible escalation from an unplanned incident. “If Saudi Arabia fires the flames between the parties, the danger becomes tangible.”

If Israel can, at some point, decide to engage in a new conflict with Hezbollah, it will not do so to please the Saudis, even though Hassan Nasrallah, the organization’s secretary-general, claimed that Riyadh had promised billions of dollars in Tel Aviv if it triggered a war. A clash with Hezbollah, which could spill over into Syria, where Iran has strengthened its positions and Russia is active, is not without major risks for Israel. Especially since Hezbollah made it clear that in the case of bombing Lebanese cities, no metropolis, not even Tel-Aviv, would be immune. Threats that are not underestimated are taken lightly in Israel.

In recent days, the Lebanese capital has become covered in “We are all Saad” posters, reminiscent of those that had been posted on the eve of the January 2011 revolution in Egypt “We are all Khalid Said,” a kid kidnapped by police and died under torture in one of Hosni Mubarak prisons. Participants in the November 12th marathon wore armbands “We run for you.” Some posters of MBS posted in Tripoli, the large northern Sunni city and stronghold of radical groups, had to be removed, many of them burned. President Michel Aoun has called for the return of the Prime Minister to Lebanon. The different political parties formulate this same requirement across the political spectrum, a rather rare national unity. The Future Movement, political party of the prime minister, while condemning the anti-Saudi campaigns, affirmed the need to see Saad return to the country, a question of “dignity” was specified, and refused to consider another leader – several media had written that the Saudis wanted to replace Saad by his older brother Bahaa. The Saudi Arabian Minister of Gulf Affairs and former general and former ambassador to Iraq Thamer Sabhan, replied by twitter that this “passion” for Saad Hariri was very surprising coming from those who, according to him, “had murdered his father Rafic and Lebanon’s hope for a peaceful and moderate life. “

Yet this national unity undermines Saudi projects. The majority of Lebanon, though accustomed to foreign intervention, has taken such blatant interference in the country’s internal affairs as an insult to their dignity. And, everyone knows, the Future Movement, the main Sunni formation very weakened, is quite incapable (even if it desires so) of building a coalition broad enough to exclude Hezbollah from power, not to mention confronting it militarily.

It is probably for these reasons that Hariri was finally authorized to fly to France and will probably return to Beirut. But it is not known if he will maintain his decision to resign or not. And what will be the next moves of the Saudis, after what appears to be a fiasco for them? What will the external powers do, especially the United States but also Russia involved in Syria? Will France be worried about the fate of Lebanon and who will try to play the intermediaries? No one can answer. But, as Peter Harling writes in a tribune of the daily newspaper Le Monde, “Lebanon looks like a plane whose pilot jumped into a parachute.” And the question everyone is asking is, “where will the plane crash?”

Alain Gresh is the editor of the online newspaper OrientXXI.Info. He was former Editor in Chief of Le Monde diplomatique.