Who Decides Whether Islam Belongs to Germany or Not?

If a democratic state accepts that the discourse of right-wing extremists will shape the country’s future perception of what belongs to Germany, where will then be the borders of that populism and ignorance and who will guarantee that it will not end in a fiasco? 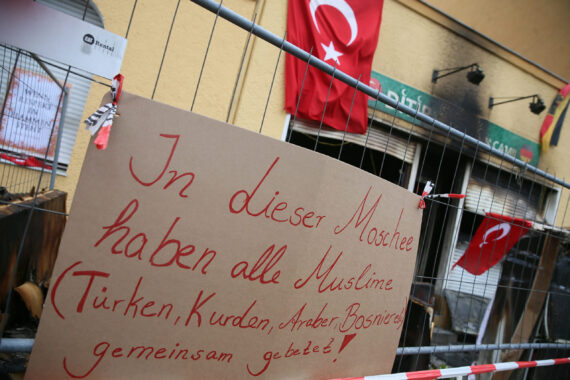 A sign hung in front the damaged part of Koca Sinan Mosque translates "(Turkish, Kurdish, Arabic, Bosnian) Muslims Pray Together In This Mosque" after an arson attack targeted the Mosque on March 11, in Berlin, Germany on March 16, 2018. Anadolu Agency

The new German Federal Minister of the Interior (Christian Social Union, CSU), Horst Seehofer, said in a recent interview that “Islam does not belong to Germany … of course the Muslims who live with us belong to Germany.” Beside these controversial and paradoxical statements, which reduce people’s identities to their religion, Seehofer also stressed that he will tighten Germany’s immigration policies.

It can be stated that the new Interior Minister de facto started a populist election campaign aiming a re-election of the single-party CSU-government in Bavaria. While this happened, several mosques and Turkish associations were set on fire in German cities by “unknown extremists.” These attacks took place right after PYD/PKK terrorist sympathizers threatened to carry out more violence against Turkish mosques and associations in Germany over the Internet. No single German politician on the federal platform – except for some local voices – condemned these attacks.

The first official federal condemnation was expressed by federal spokespersons six days after the initial attacks occurred. But to stress the issue’s importance; even though 4,5 million Muslims and 3 million people with a Turkish background live in Germany, neither the Federal Minister of the Interior nor another federal minister personally showed a sign of solidarity. Unfortunately, the same can be said for civil society. Ironically as the attacks were carried out, the issue being discussed was whether Islam belonged to Germany or not.

Subsequent to Seehofer’s recent statements, many politicians distanced themselves from these remarks. Even German President Steinmeier responded to Seehofer by affirming that he believes there is place for Islam in Germany. Furthermore, Chancellor and CDU leader Merkel stated, “there are now four million Muslims living in Germany and they practice their religion here and these Muslims belong to Germany, as does their religion – Islam.” Similar approaches were expressed from moderate CDU and SPD politicians. Furthermore, MPs from the Left Party, the Greens and Liberals criticized Seehofer for his remarks and even condemned such cleaving views. On the other hand, some CSU members and even ‘conservative’ CDU politicians supported Seehofer.

The most striking statement, however, came from the right-wing Alternative for Germany (AfD). Party leader Gauland agreed with Seehofer’s stance, though, he criticized him for imitating AfD’s positions regarding Islam in Germany.

In contrast to the view of moderate politicians, according to a recently conducted survey, most of the public in Germany support Seehofer’s position. Polls indicate that 61% of society believes Islam is “absolutely not” a part of Germany, while 15% of respondents preferred the answer “probably not.” Only 6,4% stated that Islam “definitely” belongs to Germany and another 14.9% answered, “probably yes.” Current polls reflect the fact that in contrast to previous years, the number of Germans refusing Islam as a part of Germany is increasing.

Consequently, although two central parties are still the strongest in Germany, it’s quite possible that the right-wing AfD will become the second strongest party in the near future. It seems that conservative parties consider the current trend and ultimately decide to imitate AfD discourses. However, this phenomenon not only affects AfD voters and sympathizers but also affects other racist movements. The potential of being ‘anti-Islamic’ goes far beyond these circles right into the core of German society, as The Religion Monitor of the Bertelsmann Foundation suggests.

But what to do? First of all, citizens of a democratic and reasonable society may ask some questions like: Who decides which religion or people belong to the Federal Republic of Germany? Do Muslims with a German passport or Muslims who are ethnically German belong to Germany? According to Seehofer, paradoxically, Muslims do, but Islam does not, but how do you divide a Muslim from Islam?

Do people in Germany need to define themselves through their religion? Actually, the German constitution provides satisfactory contents. Or, should one assume that the Interior Minister indirectly casts doubt on constitutional facts? If a democratic state accepts that the discourse of right-wing extremists will shape the country’s future perception of what belongs to Germany, where will then be the borders of that populism and ignorance and who will guarantee that it will not end in a fiasco? As the current German president recently urged politicians not to focus on fighting over headlines, one should accept the German reality, respect the freedom of religion and stand by former German President Wulff’s assertion (2010) that “Islam is now also part of Germany.”