Who did Kemal Kilicdaroglu Want to Please with his Germany Visit?

Even though the CHP chair stressed that Germany should take into account Turkey’s sensitivities in its fight against terrorism, he unfortunately did not shy to come together with individuals who are sympathetic to the PKK. 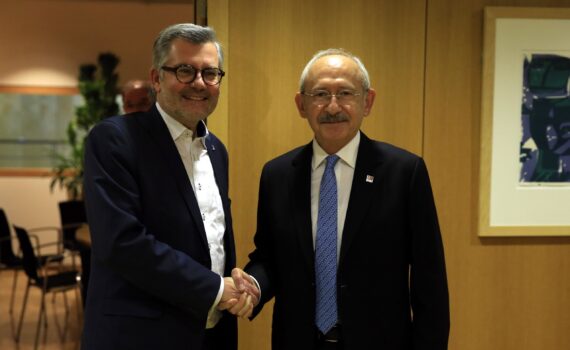 Chair of the main opposition in Turkey, Kemal Kilicdaroglu paid a two-day visit to Berlin last week. Besides his lunch meeting with Turkey’s Ambassador to Germany, the leader of the Kemalist-left CHP came together with the members of the Social Democratic Party of Germany (SPD).

Actually, it might be a potential opportunity and dynamic that Turkish social-democrats meet with German social-democrats in order to develop a mutual support in the light of universal social democracy. Such steps might be interesting and fruitful particularly in a country where social-democracy had a political success in the past and flourishing trajectory in a relatively global comparison. Surely, this phenomenon has been true for many years. However, is not valid now when one takes into account the result election results and polls regarding both the SPD and CHP. That is to say, similar to other Western countries, social-democratic and center-left parties face huge difficulties in achieving popular support among citizens.

Kilicdaroglu met some leading personalities of the SPD and delivered a speech during a panel organized by the Friedrich Ebert Foundation – a known establishment close to the SPD. Furthermore, the CHP chair published an op-ed article in the country’s most renowned “conservative” daily, the Frankfurter Allgemeine Zeitung – interestingly he did not prefer the country’s renowned left or left-liberal pieces.

Why did the CHP chair publish an op-ed article in one of Germany’s most renowned “conservative” newspapers, the Frankfurter Allgemeine Zeitung, but not in a renowned left or left-liberal newspaper?

The main points I want to emphasize however are Kilicdaroglu’s statements he made regarding “democracy” and his expectation regarding Germany’s support during Turkey’s fight against terrorism. These two points are of great importance in my opinion because it’s interesting to address a Kemalist politician’s perception of “democracy” and his actual actions on the other hand. In addition, even though the CHP chair stressed that Germany should take into account Turkey’s sensitivities in its fight against terrorism, he unfortunately did not shy to come together with individuals who are sympathetic to the PKK.

Firstly, even though Kilicdaroglu criticized Turkey’s democracy standards both during his meetings and in his op-ed piece, there have not been any critical stances regarding his own party in general and regarding the democratic deficits in the process of, for instance, electing a new CHP chairperson. That is to say, even though Kilicdaroglu has not gained any real success since he became party chair in 2010, for instance by losing all elections since that date – exactly 9 – he still intends to retain that position while systematically preventing dissent voices among other CHP circles. But actually, and absurdly, neither the German media nor German social democrats addressed this fundamental problem.

Even though the CHP chair stressed that Germany should take into account Turkey’s sensitivities in its fight against terrorism, he unfortunately did not shy to come together with individuals who are sympathetic to the PKK.

Why? Wouldn’t it be more honest if the CHP started a democratization process within its own party? One has to emphasize that there is unfortunately a one-man hegemony in Turkey’s main opposition party. But despite these actual facts, the call for a change is permanently missing. One might understand the Kemalist-leftists insisting on continuing the status quo, but why do German SPD circles not problematize this lacking behavior in the name of democracy? Critical German circles should face these questions.

Furthermore, during his meeting with a SPD politician, Kilicdaroglu stated that Turkey moved away from “the values of Atatürk.” In this sense, the CHP’s criticism lacking stance with regard to Turkey’s initial era is also a problematic issue. There are no critical positions or statements with regard to the single-party era and several other problematic actions during this period. And here again, German social-democrats and German left-liberal media representatives deliberately maintain their silence while these voices are generally used to criticizing every little component in Turkish politics and political history in general.

Kilicdaroglu criticized Turkey’s stance of democracy, but wouldn’t it be more honest if he began a democratization process within his own party? For instance by leaving his seat after losing 9 elections.

The second point worth to address is Kilicdaroglu’s op-ed statements and his contradicting actions. While Kilicdaroglu wrote that Germany should take into account Turkey’s sensitivities in its fight against terrorism, he came together with controversial Left Party members, who openly stand for the abolishment of the PKK ban in Germany. As is known and despite lacking actual implementation, the PKK terrorist organization is officially banned in Germany since 1993. However, parliamentarians such as Sevim Dagdelen are supporting the PKK-friendly discourse in Germany, calling for the abolishment of the PKK ban and do not accept the PKK as a terrorist organization. The Left Party in general also stressed this call in its last federal election program of 2017 (Left Party election program 2017, p. 112). Thus, the question arises as to whether Turkey’s second biggest political party, which acts as the main opposition party as well, does not have any information about these facts? Or, did the CHP leadership deliberately take this step in order to achieve some –local elections motivated– goals in so-called HDP strong provinces?

During Kilicdaroglu’s two-day visit to Germany he did not problematize Germany’s ambivalent behaviors with respect to issues such as the PKK and FETO. Further, the CHP chair did not mention any concrete words regarding these problematic topics in his op-ed piece. He also met with members of the Left Party, which stands for the abolishment of the PKK ban, which is actually not in compliance with Turkey’s main strategic security interests. All in all, the likely purpose of Kemal Kilicdaroglu in creating this image or spirit of a universal social-democratic alliance in order to strengthen the party’s local elections campaign does not seem very convincing.