Who is Afraid of Early Elections?

The CHP chairman Kilicdaroglu does not seem to know yet if he will run himself as a candidate or nominate the names like former President and AK Party member Abdullah Gul and the CHP deputy Ilhan Kesici, a center-right politician. 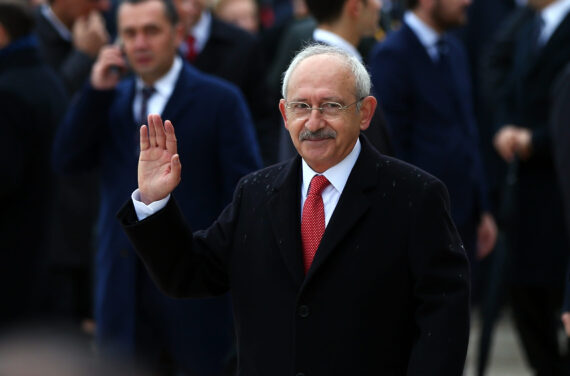 Kemal Kilicdaroglu, head of the Republican People's Party’s (CHP) visits the Anitkabir, the mausoleum of the founder of Turkish Republic Mustafa Kemal Ataturk, during a ceremony marking the 94th anniversary of Republic Day on October 29, 2017 in Ankara, Turkey. Anadolu Agency

There is a certain period in which the Republican People’s Party (CHP), which is the Republic of Turkey’s founding party, did not claim that the polls were rigged in general elections. This period corresponds to the years between 1923 and 1946, when open vote and closed counting method was in use during the single-party period before the multi-party system was introduced in 1946. Since the CHP was the only party during this period, it did not engage in any propaganda to suggest that the polls were rigged. But since the transition to a multi-party system, the party has always alleged that the winning party has gerrymandered. For instance, when the Justice and Development Party (AK Party) received 49.4 percent of the total vote while the CHP received 25.31 percent in the general election held on November 1, 2015, the CHP claimed that the AK Party rigged the election.

The CHP did not consider it risky while making such a claim although the total vote share of the three leading opposition parties, namely the CHP, the Nationalist Movement Party (MHP) and the Peoples’ Democratic Party (HDP), did amount to 47.96 percent, which still remained below the AK Party’s vote share. The habit of articulating the claims of rig has also been observed in the CHP’s caucus and chairman elections. As can be remembered, last month, during the 36th ordinary meeting of the party in which Muharrem Ince and Kemal Kilicdaroglu rivaled for chairmanship, Ince claimed that the polls were rigged, adding that a politics of fear is prevalent in the party.

As in the party’s custom, the CHP Chairman Kemal Kilicdaroglu claimed that the constitutional amendment referendum held in April, 2017 was also subjected to rig, asserting that the “no” votes were actually in the majority. Over the past few months, he embarked on a brand-new strategy. This time, he alleged that the presidential elections in 2019 will be rigged. Meanwhile, a wing of the CHP even suggested to boycott the upcoming elections as a ready-made project against a possible rig.

Theoretically, the main opposition party is the closest rival of the ruling party. However, in Turkey, since the multi-party system was introduced in 1946, the CHP has never had a chance to become the ruling power except for the term of late Bulent Ecevit during the 1970s. If one fancies how the main opposition party in a country can remain so far away from the possibility of being the first party in elections, we have experienced this peculiar case throughout the Republican history. The CHP is the founding party of the Republic of Turkey. Afterwards, Democrat Party (DP), Justice Party (AP), Motherland Party (ANAP), True Path Party (DYP) and the AK Party, which was established in 2001, came to power respectively. Of course, this is partly due to the CHP’s incompetence in evaluating Turkey and the world aside from its several other chronic problems, but they are irrelevant to main themes of this article. And currently, the main opposition party is about to confront another big challenge in the run up to the early elections.

During the third week of this April, the top subjects of discussion included whether the U.S. would shell Syrian dictator Bashar al-Assad, whether Russia would respond to such an action and would they mark the beginning of World War III. In the midst of these discussions, the Nationalist Movement Party (MHP) leader Devlet Bahceli recommended to hold early elections on August 26, 2018. Upon Bahceli’s request, President Recep Tayyip Erdogan remarked that the date of the elections can be brought forward to June 26, 2018. As an AK Party deputy said, “the teeth must be immediately brushed as the toothpaste is squeezed from the tube.” Accordingly, it seems that the most reasonable option ahead is to hold early elections as soon as possible since the early election rumors already led to a certain anticipation.

According to the whispers in the parliamentary corridors, the CHP, which secretly hoped that Erdogan would talk Bahceli out of the idea of early elections, is now the leading party in a tight spot. Although there are only two months before the elections, the main opposition party does not have a candidate yet. Even worse, the CHP chairman Kilicdaroglu does not seem to know yet if he will run himself as a candidate or nominate the names like former President and AK Party member Abdullah Gul and the CHP deputy Ilhan Kesici, a center-right politician. Kilicdaroglu and the CHP remarked that they will announce their final decision on Wednesday. In such a limited period, the party is required to present a candidate, propound its promises and convince the electorate. Apparently, the CHP will bring up claims of rig although the party called upon the government to organize early elections for months.

Every government needs a main opposition party to which it has to pay regard while taking any action or decision. The incompetence of the main opposition is surely an unfortunate situation for Turkey.