Who is Andrew Brunson and Why was He Jailed? 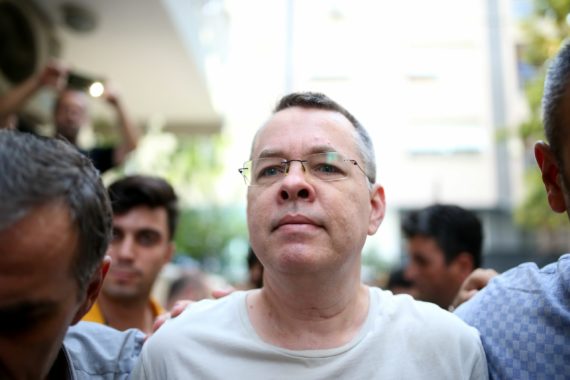 U.S. President Trump had another one of his Twitter moments on Thursday. This time, the target was Turkey. He tweeted as follows: “The United States will impose large sanctions on Turkey for their long time detainment of Pastor Andrew Brunson, a great Christian, family man and wonderful human being. He is suffering greatly. This innocent man of faith should be released immediately!” The tone and means of the message is far from diplomatic conventions but this is not something unusual for Trump. There are stranger things in this matter.

First, who is Andrew Brunson and why was he jailed (currently under house arrest)? Brunson is an American pastor who has lived in Turkey over two decades. He was arrested on December 9, 2016, about 4 months after the failed coup attempt in Turkey. He was arrested for terrorism and spying charges. It is no secret that countries send spies to other countries, even to the ones they ally with. Hence, whether or not Brunson is one of them, it would not surprise anybody if some people spy in Turkey for the U.S. When people are found spying, they might be exchanged, which is not uncommon between countries. But there is more to this story.

To open it up further, Brunson was claimed to be linked to FETO (Fethullahist Terror Organization) which plotted the June 15, 2016 coup attempt and is responsible for killing 250 Turkish nationals and injuring thousands on the night of the coup attempt. Speaking of FETO, the leader of the organization and the mastermind of the coup attempt, Fethullah Gulen lives in his mansion in the U.S. Gulen is not a U.S. citizen but Turkey’s calls for his extradition does not find ears in the States. U.S. politicians keep referring to the issue as a matter of judiciary and avoid taking initiative. Yet, when it comes to the Brunson case in Turkey, Trump can easily threaten Turkey with “large sanctions.”

Something is not right in this picture. Why would the U.S. not extradite a non-U.S. (Turkish) citizen to Turkey despite the bloodshed he spilt in Turkey? Why would the U.S. allow the remnants of Gulen’s network to organize in the country, while some other partners of Turkey extradite the members of the organization? What would any sensible person think about such a situation? Gulen is a Turkish citizen who plotted a coup attempt in Turkey but seeks and finds support from the U.S. As a result, many, if not all, Turkish nationals see the July 15 coup attempt as an American project.

In fact, it is easy for the U.S. to end these suspicions by simply extraditing Gulen. But for some reason it is not. Why not? When this is the case, naturally, many Turkish nationals think the U.S. will not extradite Gulen because he knows too much! And because his extradition would hurt the American credibility in the eyes of its future partners in crime. Yes, this is the overwhelming public opinion in Turkey on the U.S.-Gulen affair. And who can claim this line of thinking does not make sense?

At the end of the day, the U.S. has not extradited Gulen so far despite Turkey’s insistence on the matter. Yet, the very same U.S. asks Turkey to release Brunson, who is suspected of spying in Turkey and being linked to Gulen’s coup attempt. This is not fair. This is the stronger side imposing its will on the side that it sees weaker. This is like a quote from the famous Melian dialogue: “While the strong do what they can and the weak suffer what they must.” Well, the story might have a different end this time if the U.S. keeps alienating Turkey and pushing it to seek alternatives to its long-lasting alliance with the U.S. Hence, the question is, will the U.S. try to keep a significant ally on its side or push it closer to its global rivals?