Who is Concerned about Turkey's Military Capacity in Greece?

The most important disputes between Greece and Turkey are the maritime borders in the Aegean Sea, which still remains unclear due to the Treaty of Lausanne, and the long standing Cyprus issue. 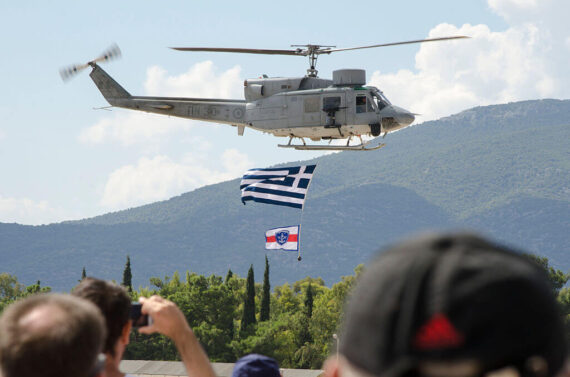 A Hellenic Navy Aviation AB-212 ASW helicopter passes over the spectators with a bi Greek flag during the first day of Athens Flying Week Airshow in Tatoi Airbase. Getty Images

Alexis Tsipras’ recent visit to Turkey, which was considered as a ‘surprise’ in Turkey and criticized in Greece, has been debated and brought long standing disputes between two neighbours with a shared history to the attention of both the Greek and Turkish media.

There are some videos articulated by the Greek media circulating on Turkish social media, describing the technological developments in the Turkish defense industry as an upcoming “war” between the two countries.

Both societies have been living together side-by-side so long that they know and respect each other, while still sharing many common cultural and traditional elements. Turks visit the Greek islands and many Greeks visit Istanbul.

So, what causes the tension between the two neighbours? Speaking to The New Turkey, Greek journalist Vassilis Nedos from Ekathimerini stated that the interest of the Greek media in regards to Turkey has been quite high with a hostile perception. However, that society has been wiser than the media with a moderate approach towards Turkey and its politics. He stated that “society believes that if there is a problem, both sides should sit down and talk to solve it.”

Vassilis Nedos from Ekathimerini commented for The New Turkey and said “The interest of the Greek media in regards to Turkey has been quite high with a hostile perception. However, society has been wiser than the media with a moderate approach towards Turkey and its politics.”

Answering questions posed by The New Turkey on the subject, lecturer in the Politics and International Relations Department at Aston University, Dr. Yaprak Gursoy, stated that the Greek media in general has paid more attention to what is happening in Turkey than the Turkish media has for Greece: “There is almost an asymmetrical focus between the two countries. From what I can observe, Turkey appears in the Greek media frequently, not only on security related matters, but also in cultural and political news. One example of this is certainly the frequency of the news coverage on what we call the “dog fights” between the Greek and Turkish air forces in the Aegean. While this is hardly ever covered substantially in Turkish broadcasts, it leads to lengthy news segments in Greece, portraying the fight between the planes as Turkish forces’ violation of Greek airspace.”

Vassilis Nedos described this ‘asymmetrical focus’ simply due to the fact that “Turkey has more than 80 million (in terms of population), while Greece is just above 10 million.” Agreeing with Dr. Gursoy, he added that the events occurring in Turkey have always been important for Greece.

Dr. Yaprak Gursoy from Aston University commented for The New Turkey that videos appealing to Greek nationalist sentiments always have a certain level of presence in society, but, news coverage that borders on xenophobia does not appear in a crude form in the mainstream broadcasts.

According to Vassilis Nedos, as a result of the historical ‘enmity’ between the two countries, there has always been a mutual distrust and scepticism towards each other. So, the exaggerated nationalist rhetoric in the Greek or Turkish media is something the media uses in order to attract their audience with ‘strong’ nationalist views. This is also something emphasized by Dr. Gursoy, who stated: “The contents of these videos (footage from Greek media circulating in Turkey) appeal to general Greek nationalist sentiments, which always have a certain level of presence in society, but, in my experience, news coverage that borders on xenophobia does not appear in this type of crude form in mainstream broadcasts.”

These nationalist sentiments seem to be more popular in Greece – at least towards Turkey – than in Turkey in the past years until now. However, the videos comprised by the Greek media with Turkish subtitles on Turkish media channels have begun to attract the attention of Turks in an adverse way.

Having watched these videos, Vassilis Nedos confirmed that this kind of an interest in the development of Turkey’s defense industry is not something new – it repeats itself all the time and is sometimes exaggerated. He also added that due to the economic slowdown of the Greek economy, the Greek army cannot improve its arsenal as much as Turkey, while Turkey is not only improving its own capacity by buying equipment from abroad, but is also producing its own weaponry. This, according to Vassilios Nedos, is the reason for the worry within the Greek public: “The Greek public asks why Turkey is expanding its army.” He commented that this question is quite understandable for a society with a neighbouring country of 80 million in its eastern border, which is economically and militarily getting stronger each year.

The Greek media in general pays more attention to what is happening in Turkey than the Turkish media does for Greece. There is almost an asymmetrical focus between the two countries.

According to Dr. Yaprak Gursoy, for both historical and geographic reasons, Turkey constitutes the most significant threat to Greece. She stated that, “While Turkey considers its southern and eastern borders as equally (or even more) unsafe, for Greece, Turkey poses the primary security threat. As such, there is always interest in Turkish military capacity in comparison to the Greek armed forces. This understanding is a fundamental one that would not change overnight.”

Vassilis Nedos also argued that Turkey’s planned military exercise ‘Blue Motherland’ has also had negative effects on the Greek public, increasing their worries. Dr. Gursoy stated that the fears of the Greeks, combined with unresolved disputes in the Aegean and Cyprus, has always made threat perceptions rise again. She added that “In the past two years, the situation appears to have gotten worse mostly because of the pilots who participated in the failed coup attempt and fled to Greece in its eventual aftermath, as well as the presence of right-wing ANEL and its nationalist leader Kammenos in the coalition government until recently.”

The most important disputes between Greece and Turkey are the maritime borders in the Aegean Sea, which is remains unclear due to the Treaty of Lausanne, the long standing Cyprus issue, which has historically been an obstacle for Turkey, but is now becoming a problem for both sides in the Eastern Mediterranean, where international maritime borders are not clear. Finally, and related to the latter problem, the ‘just’ distribution of the recently discovered gas sources in the Eastern Mediterranean, according to international maritime law, has just added a new dimension to the existing and ongoing conflicts.

In an era where balances of power in both the region and across the globe are rapidly changing, it seems that both sides need to solve their problems with a new way of thinking. Otherwise, regardless of the two societies being close to each other, such ‘tensions’ will increase between the two neighbouring states.

Also Read
Will Turkey Delimitate Its Maritime Borders with Egypt and Palestine?