Who killed Karlov, the Russian Federation’s ambassador to Ankara? According to the initial findings, there are many signs, ranging from the schools the shooter went to, to his contacts, which suggest that he is a Gülenist. 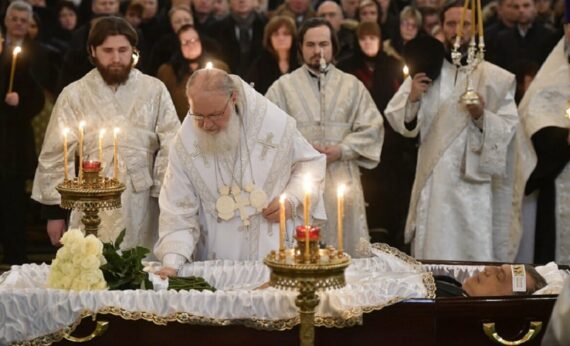 132 people in Turkey were apprehended over the charges of being affiliated with Al-Qaeda during simultaneous police operations seven years ago. News channels covered the operation all day, and experts discussed extensively what the operation meant. The truth came out years later: this was actually not a police operation targeting Al-Qaeda, but a scheme by Gülenists within the judiciary and security forces to eliminate an opposing religious faction.

WorldBy Silan Cecen
Even though this was a small-scale operation compared to the others, the structure of the Gülenist Organization in Turkey was first revealed through the said operation in the following years. Targeted by Gülen himself and accused of being an Al-Qaeda member, 66-year-old Mehmet Doğan was a retired imam. He had a small congregation gathered around him in Muş, a city in the southeast part of Turkey. His congregation consisted of followers of Said-i Nursi, one of the most influential religious figures of the 20th century in Turkey. This group, which also had a publishing company named Tahşiye (Annotate), had been criticizing certain Islamic statements by Fetullah Gülen. The group’s criticism wasn’t known by anyone in Turkey, except for the members of the group and Gülen.In a speech made online on April 6 2009, Gülen talked about a subject only his followers could understand: an organization, which was named Tahşiye. Listening to the speech, you may think that the Tahşiye members are terrorists, or you may think that there is a group named Tahşiye, which consists of innocent members who are to be framed! As Gülen’s followers understood his ciphered messages, the operations commenced immediately. The investigation conducted after the revelation of this scheme uncovered some interesting details: two days after Gülen’s speech, his media outlets, even series being aired on his TV channels, started to cover Tahşiye.First, the Zaman daily covered the group, which was followed by Tek Türkiye (“One” or “United” Turkey) three days later, a TV series being aired on the Gülen-affiliated Samanyolu TV channel. In the series, the gathered “Dark Council” had mentioned a group named Tahşiye. Moreover, on Gülen’s TV channels, the segments from the said TV series were used on news bulletins while covering Tahşiye, as if it was actual footage. While the subject was being covered by the Zaman daily every 3-5 days, another Gülen-affiliated newspaper, Bugün, was publishing news pieces stating that Tahşiye was an armed terrorist organization which had links with Al-Qaeda. Ultimately, 7-8 months later Mehmet Doğan and more than a 100 of his disciples were put into prison by Gülenist loyalists in the judiciary and security forces on charges of being Al-Qaeda supporters.

Even Daesh, which is known to be skillful in employing media and technology, is almost nothing when compared to the Gülenist Organization. While the Gülenist media conducted the usual media business on one side, they were working for the elimination of figures or organizations, which are critical of them or may disrupt their short-term, midterm or long-term targets. A short time after the news on the media, the Gülenists within the security forces and the judiciary were starting to operate and make comments on the issue which enforced the ideas been propagated by their own media outlets.

Thousands of Gülenists were able to fill posts in the judiciary, security forces and bureaucracy; sometimes they openly said they were Gülenists, sometimes they just assumed other identities, concealing their own identities: leftist, extreme leftist, right-wing, agnostic, deist, laic or Islamist, etc. This is also true for their members within the ranks of the media and the academia. To camouflage their identities like a chameleon until the time is right is the characteristic of this organization, which differentiates it from the other terrorist organizations.

It was recently revealed that they were also stealing the answers to various exams, including the military, civil service and university entrance exams. It should be expressed that these people, Gülenists, weren’t just waiting for the answers to the exams; they were also hard-working and diligent. In politics, they infiltrated not only the ruling party, but they have infiltrated almost all existing political, social and religious movements, including many NGOs.

Not all of the Gülenists have been found and put to trial yet, as it is an organization, which has been active for 40 years. The majority of the people of Turkey had at least an acquaintance, neighbor, colleague or even family member which was linked with this organization. This is another characteristic of the organization; none of the members of other secret organizations could have such day-to-day interaction with the people. Moreover, none of the other organizations’ members could look so ordinary to the surprise of the people.

The leadership of this terrorist organization, which resembles modern Western sects like the Moon or Scientology is also different from the leaders of all existing terrorist organizations. You can’t see any PKK or Daesh leaders speaking from different points of view on a singular subject, as if they have numerous different personalities. Gülen, on the other hand, can act as if he is a great humanitarian, the leader of a violent terrorist organization, a slanderer or just an ordinary person. He doesn’t even speak to his followers in a singular voice. It isn’t possible to cover each and every example; however, there was a speech of his to his followers that was uncovered recently:

“If I am to bring harm to Hizmet [“Service” – what the organization calls itself] and my annihilation is a way to protect my institutions, I’m ready to sacrifice my life. Even if it is a cardinal sin, I’m ready to face it. Considering this, you may think about what I’m further willing to do. (…) God willing, we’re ready to face every challenge for the Service. If such sacrifice is necessary, we will let the flames consume us. If we are talking about this issue extensively, all of our friends out there should also do so.”

In short, Gülen is saying commit suicide instead of endangering the organization, even if it means going to hell. Expressing this idea in longer sentences is not a coincidence; it is a method, of course. Looking at these speeches as a whole, it is easy to realize that he is trying to show that everything he says is consistent, while, in fact, it is contradictory.

It took a long time for Turkey to recognize and understand the threat of this organization,  which was thought to be comprised of friendly and charitable people. Even after the realization of the threat they pose, if the state could have made a propaganda film out of the events transpired on the night of July 15, get on to a time machine and show it on the night of July 14, one still would have had a hard time believing that the Gülenist Organization could be that brutal or bloodthirsty.

Moreover, if one had seen putschists firing on the elderly, who begged the putschists to give up their guns and stop this madness, in this hypothetical movie, one would have still said that the Gülenists were being demonized. However, all of this was not in a film; there never was a film. It was the cold harsh reality. The Parliament was bombed, the Chief of Staff was held hostage, and National Intelligence Organization was strafed by helicopter gunships. More than 2,000 people were wounded. All of the people in Turkey felt that this was more of an invasion than a coup. Even today, this harsh reality seems as unreal as a science-fiction film. As it was covered by foreign media outlets, not only do the supporters of the government believe that the coup was perpetrated by this organization; even the government’s fiercest critics are of the same mind with the government in this matter.

Who killed Karlov, the Russian Federation’s ambassador to Ankara? According to the initial findings, there are many signs, ranging from the schools the shooter went to, to his contacts, which suggest that he is a Gülenist. On the other hand, it isn’t a secret that Gülen had established his game with external parameters through his schools all around the world. His ambition and attempts to shape Turkish foreign policy aren’t also a secret anymore. Two years ago, the organization commenced an operation with its infiltrators within the security forces and the judiciary, accusing the government of being corrupt, which actually targeted Turkey’s relations with Iran and the Kurdish Regional Government in Northern Iraq. While the Ergenekon and Balyoz trials targeting the military allowed the organization to open space for their own members, it also eliminated military personnel, which argued that Turkey should prioritize the Russia-China axis. The “demonic Iran” propaganda, which was being propagated by the organization’s supporters, has also been deciphered, as the relations between the US and Iran entered a new phase. Now that the US is opening up to Iran, Gülenists aren’t even mentioning Iran anymore, even while talking about Syria.

Suspecting that the assassin was a Gülenist right from the beginning isn’t without reason. No one would be surprised if he were a Gülenist masquerading as an Al-Nusra militant. Turkey knows very well that Gülenists are like chameleons, always masquerading. This was experienced by everyone ranging from highest-ranking bureaucrats to the ordinary people, in every part of life, from ordinary events to foreign policy.

Also Read
The Gulen question and Flynn’s cooperation with Mueller