So what does Cambridge Analytica do exactly? One thing the company does is “data mining.” In this case, they’ve omitted this to over 50 million people. By doing so, the company searches for personal data through Facebook accounts and creates a data bank. With this, the company becomes able to map the psychological conditions and tendencies of users in order to give advice to their customers – such as political parties. 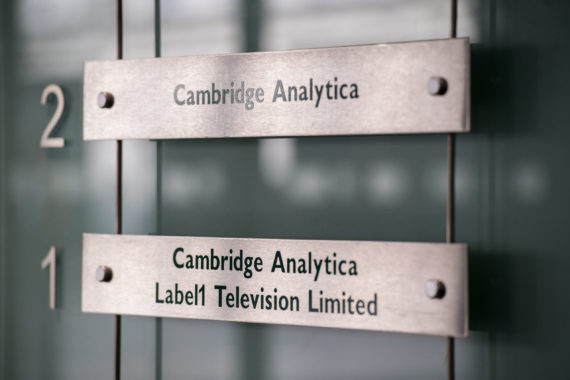 Signs for company Cambridge Analytica in the lobby of the building in which they are based on March 21, 2018 in London, England. UK authorities are currently seeking a warrant to search the premises of Cambridge Analytica after the company has been involved in a row over its use of Facebook data. Their CEO Alexander Nix has since been suspended. Getty Images

Recently a scandal emerged pulling to the surface the fact that the data of over 87 million Facebook users have been used for President Trump’s 2016 election campaign. Beside Facebook, Cambridge Analytica, “the firm that worked for Trump’s campaign” has been accused of stealing and benefiting from individual opinions.

Cambridge Analytica was established in London in 2013. The firm serves its customers who want to analyze and change the behavior of their consumers – or voters. The data obtained from these individuals were not only mis-used to analyze political tendencies, but it has also become clear that they were used for political manipulation.

This incident is very important for two reasons. First, while Trump’s success in the 2016 elections had originally been questioned due to Russian meddling, the picture has now also changed with this scandal. Second, the importance of data science has shown itself and displayed its power. The issue has now become the power of manipulating individual political choices and the future of a country’s governance.

Using and benefiting from personal data is not a new phenomenon. Our browsers direct us to commercial advertisements every day and even manipulate us to make us buy objects or think about issues we usually may not.

Although data about our personal tendencies are used by several companies that work in different fields, the offence committed here is that this data was derived from Facebook users.

Even though Facebook announced that it will not work with the company anymore, Mark Zuckerberg, CEO of Facebook, was demanded to testify before the U.S. Senate and Congress about the incident. On 11 and 12 April, 2018, he testified to Congress – this took over 2 days and 10 hours. Questions asked by the senators gave particular emphasis to the individual privacy of individuals.

Zuckerberg’s testimony is important for two reasons: First, Mark Zuckerberg is the first CEO of a tech company who ever testified to Congress. The second is that the hearing became an opportunity for Facebook to amend its public appearance.

Social engineering refers to taking advantage of the behavior of individuals and manipulating them by collecting confidential information. The methods and aims of this vary. Criminals may try to trick people in order to obtain financial information, or may try to hack computers. In this case, social engineering was processed to obtain the political tendencies of voters.

So what does Cambridge Analytica do exactly? One thing the company does is “data mining.” In this case, they’ve omitted this to over 50 million people. By doing so, the company searches for personal data through Facebook accounts and creates a data bank. With this, the company becomes able to map the psychological conditions and tendencies of users in order to give advice to their customers – such as political parties.

Also Read
Facebook’s Lawsuit against Israeli Spy Firm NSO Reveals Its Dirty Work
We use cookies to optimize your online user experience. To learn about our use of cookies and how you can manage your cookie settings, please see our Privacy Policy. By continuing to use our site you are excepting our use of cookies.Accept Cookies & CloseMore Info