There are four scenarios for who is behind the oil tanker attacks in the Oman Sea. The U.S. is already at an economic war with Iran, which is damaging both the liberal world order and the lives of millions of innocent Iranian people. 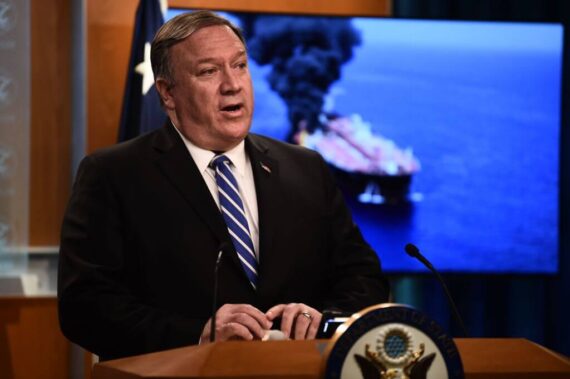 US Secretary of State Mike Pompeo delivers remarks to the media at the State Department in Washington, DC on June 13, 2019. - US Secretary of State Mike Pompeo accused Iran of being behind attacks on two tanks in the Gulf of Oman Thursday, and said it was taking the case to the UN Security Council." It is the assessment of the United States that the Islamic Republic of Iran is responsible for the attacks," Pompeo told reporters. ERIC BARADAT/AFP/Getty Images

On June 13, 2019, two tankers in the Oman Sea carrying crude oil were the target of attacks. Located between the United Arab Emirates and Iran, the two tankers were just about to leave the Persian Gulf. It is not yet known who is responsible for the attack. However, this is not the first one and it seems like it will not be the last.

Following the Trump Administration’s decision not to extend the waivers of the Iran sanctions, Tehran once again threatened the U.S. to close the Strait of Hormuz, which is of great strategic and economic importance with oil and recently LNG tankers. These tankers carry almost one third of the global oil shipment passing through it. “If Iran cannot export oil from the Gulf, no one else can either,” President Rouhani said. Energy exports constitute around 50 percent of Iran’s revenue and almost 20 percent of its GDP.

On November 5, 2018, the U.S. granted waivers to the top buyers of Iranian crude, when the second-round of sanctions imposed on Iran affected the most revenue-generating sector. Between November 5, 2018, and May 2, 2019, China, India, Turkey, South Korea, Japan, Taiwan, Italy, and Greece were allowed to import crude from Iran up to a limited amount. 5 of the 8 countries sustained their imports, mostly China, India, and Turkey, while helping Iran to generate revenue. However, this did not help the Tehran government save its economy, as the country began to experience difficulties in trading other goods as well. High inflation accompanied by rising unemployment, the extremely fragile banking sector and stagnant economic growth caused Tehran to become more aggressive.

The attack on two tankers in the Oman Sea carrying crude oil was not the first and won’t be the last.

As part of a “maximum-pressure policy” against Iran, on May 2, 2019, the U.S. declared that waivers granted to the eight countries will not be renewed. China, India, and Turkey criticized the decision at first and intended to pursue their imports. However, the private entities importing crude oil in these countries could not take the risk to face secondary sanctions from the U.S. and terminated importing crude from Iran. Tehran tried hard to sustain its oil trade as Zarif visited India, Japan and China in an attempt to persuade these countries to continue their oil trade. However, according to the available data, these efforts have seemed to fail.

The expiration of the waivers was followed by a series of events that threatened the global oil trade and brought the world’s attention to the Gulf. First, on May 12, 4 oil tankers – whose banners were not announced – were sabotaged. Although no serious damage occurred, it caused concerns. Then on May 13, tankers, of which one belonged to Saudi Arabia and was carrying Saudi oil, were sabotaged and the tankers were seriously damaged but no oil spill occurred. Though there is no clear evidence as to who was responsible for these two attacks, the U.S. and its allies in the region blamed Iran, which had already been threatening to close the Strait of Hormuz. On May 14, a drone attack was carried out against Saudi oil production facilities and a pipeline. This time however, Iran was directly targeted and it was asserted that the attacks were carried out by Iran-backed Houthis in Yemen.

The latest attack on two tankers took place in the Oman Sea after the U.S.’ latest sanction decision against Iran’s largest and most profitable petrochemical holding group, Persian Petrochemical Industries Company, for providing financial support to the Islamic Revolutionary Guard Corps. The IRGC was designed as a foreign terrorist organization by the U.S. State Department. However, the attack has more importance in terms of timing and targeted vessels. The attack took place during Japanese Prime Minister Abe’s visit to Iran and one of the tankers belonged to Japan. Shortly afterwards, U.S. Secretary of State Mike Pompeo held a press conference, announcing that according to U.S. military intelligence services, Iran had carried out the attack. Israel, Saudi Arabia, the United Arab Emirates and the UK supported these claims. Many other countries have expressed their concern about oil supply security.

Iran denied the accusations immediately after the attacks and government officials announced that a team had been assigned to rescue about 40 crew members in the tankers. Nevertheless, the U.S. claimed that explosives of Iranian origin were used in the attack and that the mentioned team was working to conceal the evidence revealing Iran, not for rescuing purposes. In this case, one can count a couple of conspiracy theories. First, U.S. claims are correct and Iran carried out these attacks to menace the Trump Administration from conducting a maximum pressure policy. Second, Tehran did not commend the attacks but some extremists in the IRCG carried them out. Third, the U.S. ordered the attacks in order to break negotiating activities between Iran and Japan. Last but not least, a third party organized these attacks to place Iran as a target in order to further worsen relations between the U.S and Iran and to further isolate Tehran.

There are four conspiracy theories that can be negated about the tanker attacks in the Oman Sea. First, it was Iran. Second, it was the Islamic Revolutionary Guard Corps. Third, it was the U.S. And finally, that they were conducted by a third party to benefit from the insecure environment.

Many questions can be asked about the first scenario. It is quite contradictory for Iran to attack a Japanese tanker when Prime Minister Abe was in Iran and was acting as a mediator – especially at a time when Tehran is in need of all kinds of cooperation. Why would Iran want to humiliate Abe with such an act?

In regards to the second theory, many experts, especially in the last few years, have argued that the IRCG has considerably increased its military and technological capacity and that it is highly probable for the IRCG to have carried out these attacks in order to defend Iran and its interests.

There are a number of impulsions in the third scenario. It is an accepted fact that there are contradictory ideas within the Trump Administration; the president is not in favor of military confrontation with Iran, whereas individuals like John Bolton and Mike Pompeo are keen to bring Iran to its knees with maximum pressure – even using military intervention if necessary. While President Trump has put aside his harsh language against Iran in the period before the attack and said that he was open to negotiations, Pompeo and Bolton have insisted on maximum pressure, illustrating the clashes among the administration in terms of what to do with Iran. Moreover, some pro-Israeli also support Bolton and Pompeo’s idea of military intervention in order to limit Iran in the region and to increase Israeli influence. This would be possible if the world believes Iran is an absolute aggressor and poses a threat, and needs to be controlled by any means.

In the fourth scenario, any third party producing oil could have organized the attack in order to benefit from increased oil prices. It is known that the world is experiencing interesting times when there are sanctions against oil producers, supply disruptions as a result of different geopolitical affairs, increased summertime demand and also a glut of oil supply at the same time, which lowers prices and is hurting oil producers.

These scenarios and possibilities can be further duplicated. However, there is an indisputable fact: The U.S. is already at an economic war with Iran, which is damaging both the liberal world order and the lives of millions of innocent Iranian people.