Who Was James Le Mesurier of the White Helmets?

Le Mesurier is largely seen as the co-founder of the White Helmets, and the loss of such a major advocate for the group might impact the future activities of the organization. 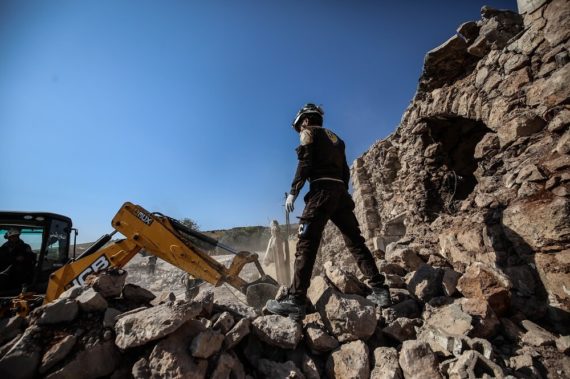 James Le Mesurier was found dead outside of his home in Beyoglu, Istanbul on Monday, November 11. He was a backer of the Syrian Civil Defense Agency, more commonly known as the ‘White Helmets’. While the investigation into his death continues, Police report that it was not caused by foul play. He was aged 48 years old.

Who was Le Mesurier?

Born James Gustaf Edwards Le Mesurier in Singapore. Le Mesurier was active in Syria since 2013. He is the official founder of Mayday Rescue, who describe themselves as supporters of a network of volunteer rescue workers known as Syria Civil Defense aka The White Helmets. Mayday Rescue has offices in Amsterdam and Istanbul.

Le Mesurier’s body was found just outside of his home in Beyoglu, Istanbul during the early hours of the morning by visitors of a nearby mosque. While his death continues to raise eyebrows, statements by the Turkish Police suggest that Le Mesurier died by suicide. Camera footage showed that no one had entered his home and police report that there were no suspicious signs inside his apartment either.

Earlier media speculation of the possibility that Le Mesurier was murdered emerged after the British newspaper The Independent pointed out that Russian Foreign Ministry spokeswoman Maria Zakharova accused Mr. Le Mesurier of being an English spy on Twitter just three days before his death. However, the Russian Foreign Ministry fired back by saying: “It is unclear why the UK media made this reference to the Russian Foreign Ministry’s official statements at this particular time, because we have already made such statements in the past, and on several occasions”. Indeed, the Ministry issued many statements in the past stating that Le Mesurier was a British intelligence agent and accused the White Helmets of having a close relationship with terrorist groups Jabhat al-Nusra and al-Qaeda. An accusation widely condemned by the White Helmets and their supporters. Both the UK and Russia are waiting Le Mesurier’s autopsy report to clarify the circumstances surrounding his death. Le Mesurier’s body was returned to the UK last Wednesday on November 20, 2019.

This isn’t the first time spies have been the focus of tension between the UK and Russia. The poisoning of double-agent Sergey Skripal and his daughter in Salisbury in March 2018 also created tension after Russia was again blamed by the UK for the attack. While Russia denied the accusations the diplomatic fall out resulted in the deportations of 23 Russian diplomats from the UK and Russia declaring the same number of British diplomats as persona non grata.

The White Helmets twitter account responded to the death posting: “We have learned with shock and sadness the news of the death of James Le Mesurier, founder and director of the humanitarian organization Mayday Rescue. Mayday is one of the institutions supporting the White Helmets.”

Who are the White Helmets?

The White Helmets are a first responders group active in Syria since 2013, they claim to have saved over 100,000 lives and lost more than 200 of its own volunteers in the process. Their backer, James Le Mesurier, was awarded an OBE title by Queen Elizabeth II in 2016 for his efforts in Syria. The group itself was nominated for a Nobel Peace Prize in the same year. A short documentary film about the group on Netflix called ‘The White Helmets’ won the Academy Award for best short documentary in 2017 and the group were also the subject of another award nomination for ‘Last Men in Aleppo’ the following year.

The group receives funding from a number of governments, including the United Kingdom, Germany and the United States as well as individual donations. Their mission in the field is to not only rescue people but to also document the attacks carried out by the Assad regime and its allies.

In a statement made by the Russian Foreign Affairs in December 2016, the group was accused of staging their videos. Russia’s accusations continued as several videos and photos were distributed with content that alleged that the White Helmets were staging their own attacks. Iran, along with Russia and the Syrian regime, have also declared the White Helmets as a terrorist group.

The White Helmets has faced serious funding cuts from the United States and some European countries such as the Netherlands since 2018, which they feared would cost more lives due to a lack of resources. The White Helmets have stated they face a serious shortage of medical supplies especially in the Idlib region saying: “The already stretched doctors no longer have the resources to provide healthcare to three million people. This leaves them in an unimaginable situation: continuing their work without pay, with dwindling supplies, and facing unconscionable questions of which life to save, which patient to treat.”

The White Helmets mocked this accusation by participating in a ‘mannequin challenge’. However the video resulted in a backlash and was used to cast further suspicion on the group’s activities by opponents. Leadership from the organization later apologized for the video stating that while it aimed to highlight the situation facing Syrians it was not authorized.

While Turkey does not deny the fact that James Le Mesurier was a British Intelligence Officer, Turkey does not recognize the White Helmets as a terrorist group, in fact the Turkish Search and Rescue Association (AKUT) trains White Helmets volunteers in Turkey. In 2017 in the midst of accusations made against the White Helmets, Nasuh Mahruki, the head of AKUT made a statement saying that AKUT did not play any role in selecting volunteers. “There might be people with links to terrorist organizations within the 3.000 people they train. It is not impossible of them to leak into group of trainees”.

Despite statements to the contrary, Le Mesurier is largely seen as the co-founder of the White Helmets, and the loss of such a major advocate for the group might impact the future activities of the organization.