Since Turkey implemented “boots on the ground” strategy in northern Syria, the Syrian crisis has become more complicated. Only those who are determined will land on both feet at the end of this crisis. 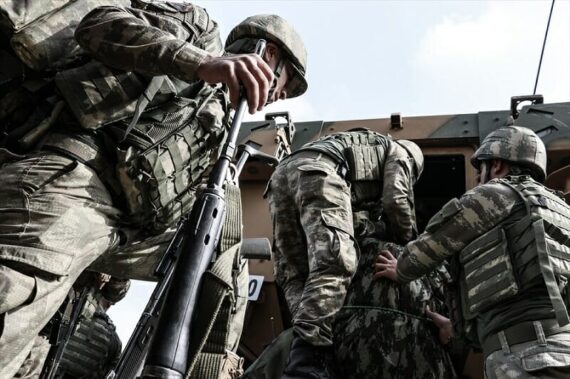 A photo taken from Turkey's Hatay province shows Turkish commando units as they are dispatched with Turkish armoured personnel carriers to border units as reinforcement within the 'Operation Olive Branch' launched in Syria's Afrin, on March 7, 2018 in Hatay, Turkey. AA

Aiming to eliminate terrorist elements of PKK/YPG, The Operation Olive Branch (OOB) launched by Turkey on January 20 revealed how local, regional and international actors in the Syrian crisis are intertwined. Both Syrian “revisionist actors” and regional actors, trying to maintain or maximize their gains along with minimizing damage, openly voiced their discomfort regarding Turkey’s novel “boots on the ground” strategy, which priorities Turkey’s military power as a foreign policy tool. More than just voicing, they have also taken certain steps seeking to obstruct Turkey’s military depth in Afrin. Iranian-led Shiite militia in support of Assad moving to Afrin to fight against Turkey, together with PKK/YPG last month, was one of the most significant indicators of the aforementioned situation. Meanwhile, despite having different motives, we have seen both Russia and the U.S. become agitated because of the Afrin operation.

Even though it is wary about Turkey’s “boots on the ground” strategy, Moscow calculates that this strategy will escalate the tensions between Ankara and Washington and force Turkey to become closer with Russia; therefore, their approach towards Turkey remains the same. Meanwhile, Washington doesn’t want to strengthen Russia’s hand and is aware that disregarding threats to Ankara’s very existence may deteriorate Turkish-American relations further, evolving into something more than a conjunctural crisis. In this respect, the recent diplomatic traffic between Turkey and the U.S. indicates that the U.S. policymakers have become “more concerned” about Turkey’s assertiveness in Syria and that the U.S. desires to reconcile with Turkey rather than exacerbate the schism between the two NATO partners.

The “boots on the ground” strategy which could be defined as eliminating threats before they reach the country’s borders is clearly yielding positive results for Turkey’s national security. The picture is actually clear; taking the Operation Euphrates Shield and outposts being established in Idlib into consideration, Ankara will achieve a military and political depth in Syria that includes territories northwest of the Euphrates with OOB; a depth that Turkey won’t relinquish in the near future. With the possible addition of Manbij to the aforementioned territories as a result of negotiations with the U.S., Turkey might secure targets in its “game plan” more easily in the short-term.

Turkey’s Afrin operation is the continuation of the new national security strategy that was shaped more clearly after the July 15 coup attempt. According to this strategy, Turkey could only contain threats emerging in Syria and Iraq, as a result of the power vacuum, with efficient deployment of military assets. In this respect, the strategy foresees the utilization of military power in the field and in cross-border operations instead of reserving it.

Considering the larger region which includes Syria and Iraq along with protruding military power and the said region’s political and geopolitical realities, the following are Ankara’s aims for the future:

In order to simultaneously achieve the aforementioned targets, Turkey has to overcome certain trials. Ankara’s security strategy mostly focuses on the minimization of the PKK threat. However, the efficient deployment of military power won’t suffice on its own; the complex network of regional and international relations has to be managed simultaneously.

First of all, eliminating the cross-border threat of the PKK with military force requires a meticulous balance between the seemingly conflicting interests of Russia and the U.S. Every improvement in Turkish-Russian relations in regards to PKK/YPG and Syria has an impact on Turkish-American relations; therefore, the relations between Turkey and Russia is at the center of it all. On the other hand, consolidation of diplomacy and the maintenance of the reconciliation between Turkey, Russia and Iran are necessity for preserving Syria’s territorial integrity. Inclusion of Washington to this process might bring balance between Moscow-Regime-Tehran, consolidate the diplomatic initiative and work in favor of Turkey. It shouldn’t be forgotten that certain regional actors like Israel and Iran might attempt to undermine this diplomatic process. Tehran’s approach to Turkey could be clearly understood from Iran’s deployment of militia and armed forces of the Syrian regime which forced Russia to become the intermediary between PKK/YPG and the Syrian regime in Afrin. Iran could be asserted as the leading “most unreliable” actor that could prevent Turkey from achieving its aforementioned goals.

Syria’s territorial integrity isn’t all about the dynamics between Turkey and PKK/YPG. In other words, Turkey may have thwarted PKK/YPG from controlling a united swath of land with Operation Euphrates Shield and OOB; however, it isn’t possible to foresee how the diplomatic process along with the preparation of a new constitution will shape Syria, especially east of the Euphrates. This is important as it is a reminder that the Syrian conflict isn’t only about the power struggle between the regime and the opposition.

A part of Turkey’s game plan, consolidation of diplomatic relations between Moscow and Ankara is relatively easy. Russia desires the schism between Turkey and the U.S. to widen and deepen. Meanwhile, we know that Russia needs Turkey in resolving the Syrian crisis and this is the main reason for Russia giving the green light to Turkey’s Afrin operation. Moscow knows that Turkey’s presence on the field tests the relations between the U.S. and PKK/YPG, forcing the U.S. to act more carefully. On the other hand, Moscow also believes that counterbalancing Iran’s field advantage and prominent influence over the regime with Turkey is useful. Besides the Syrian crisis the tensions between Turkey and NATO, along with the EU, makes Russia’s investment in Turkey even more worthwhile. Therefore, the consolidation of relations between Ankara and Moscow has become one of the pillars of security policies. Yet, symmetricity of this consolidation is crucial.

The aim to weaken the U.S.’ relations with PKK/YPG and reinforcing cooperation rather than conflicts have become a crystallized subject in terms of the ever-complicating network of regional and international relations. In order to dismiss the PKK as an issue between Turkey and the U.S., territories under the control of the terrorist organization on both banks of Euphrates has to diminish, its armed capacity has to be minimized and its partnership with the U.S. should end. Even though the PKK won’t be able to hold on to the west side of the Euphrates because of OOB, Iran’s and the Syrian regime’s certain initiatives on the field might make it harder for Turkey to completely control Afrin.

Yet, Turkey needs to “reconcile” and “find a midway” with the U.S. to realize the remaining two aims. Minimizing PKK/YPG activities to the east of the Euphrates through military intervention is among the options. However, realization of this intervention without any kind of reconciliation with the U.S. might escalate the crisis in Turkish-American relations. There is hope for a settlement between Turkey and the U.S. after the former U.S. Secretary of State Tillerson’s visit to Ankara. If the U.S. leaves Manbij to the Turkey-backed Free Syrian Army, Ankara might revise the options regarding the east of the Euphrates. This obviously doesn’t mean Turkey will consent to the PKK existence in the said region.

The other options include reinforcing the Syrian Democratic Forces (SDF), which consists mostly of PKK/YPG militants with Arabs and Kurds that aren’t affiliated with the terrorist organization, thus diluting the existence of terrorist elements, and recalling all the heavy weaponry provided to the YPG after the military phase against Daesh is over. A concrete step has to be yet taken to realize these options. Meanwhile, if Washington seeks a “local power” to limit Iranian influence over Syria in a post-Daesh setting, it has to be aware of the issues that might emerge as a result of building this strategy on the YPG. Therefore, Turkey is still one of the leading actors that could prevent revitalization of Daesh and aide the dismantling of Iran’s influence in Syria.

It’s definite that Turkey won’t back down and will force the U.S. to sever its ties with PKK/YPG. At this point, Turkey has to be militarily active on the field; Turkey’s military activities might persuade the U.S. to agree with Turkey’s demands.

Secondly, the necessity to implement a strategy that would thwart both Russia and Iran’s attempts to undermine Turkey’s fight against PKK in Syria. Iran is the most “anti-Turkey” country involved in the Syrian crisis. While Moscow handles issues in a more pragmatic way, Tehran always sees events through an ideological lens; the Shiite militia’s latest performance in Afrin proves this. It should be remembered that “military activism” and deterrence will be key in counterbalancing Iran.

Since Turkey implemented “boots on the ground” strategy in northern Syria, the Syrian crisis has become more complicated. Only those who are determined will land on both feet at the end of this crisis.