Who will oppose Syria being free from terrorism?

While Turkey has consistently called for the U.S. regime to stop funding the YPG, the Trump administration justified its support in terms of its fight against Daesh. However, reminding that the Daesh threat in Syria had been eliminated, Ibrahim Kalin emphasized that there was no need for the U.S. to continue to support the terrorist group. 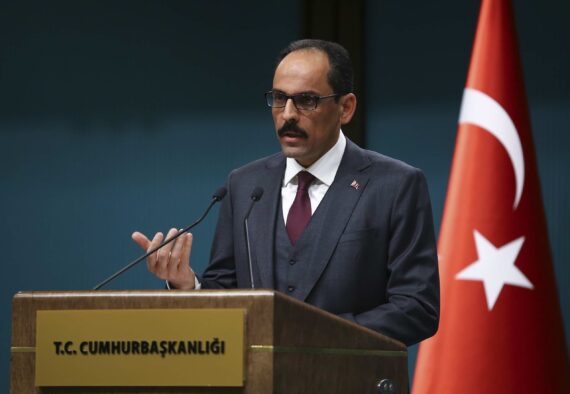 Speaking about Operation Olive Branch during a live television broadcast in Syria’s northern city of Afrin, presidential spokesman Ibrahim Kalin stated that the military campaign was launched in order to secure Turkey’s borders and its citizens from terror threats.

“When it becomes an issue of national security Turkey fulfills the responsibilities [through] its own capabilities. It is our responsibility to save Turkish citizens and Turkey’s borders. For this, we don’t need permission from anyone.”

“The PKK, or another terrorist organization, can never come to a position to determine the destiny of Kurdish people in this area. Neither the Kurds nor the Turks nor the knowledge, history and conscience of these Anatolian lands permits this.”

Reiterating Turkey’s call to the U.S. administration to stop supporting the PKK/PYD in Syria, Ibrahim Kalin stated, “Who can oppose the argument that the Syrian territory should be cleared of all terrorist elements? If someone opposes this, that means they have some other plan. In such a case, we will sit down and make a new assessment over that plan.”

“Our expectation [of the U.S.] is actually very basic, simple, clear and concrete: to end [its] support of the YPG and PYD. When this is accomplished, then we will say this is [the guarantee] from the U.S. for us. Then let’s talk about the current situation and future of Syria as well as the interests of the Syrian people.”

“Our expectation from the U.S. administration is to completely cut their support to the YPG and PYD. This is a solid guarantee. This is also a necessary step [to be] taken on the ground.”

While Turkey has consistently called for the U.S. regime to stop sponsoring the YPG terror, the Trump administration justified its support in terms of its fight against Daesh. However, reminding that the Daesh threat in Syria had been eliminated, Ibrahim Kalin emphasized that there was no need for the U.S. to continue to support the terrorist group.

Also Read
What will Turkey Face during the Afrin Operation?