Who Will Turkey’s Kurds Vote For?

The electoral behavior of Turkey’s Kurds with regard to the AK Party and Erdogan vis a vis the HDP shows that President Erdogan has become a much tougher challenge for the HDP in comparison to the AK Party as a whole. 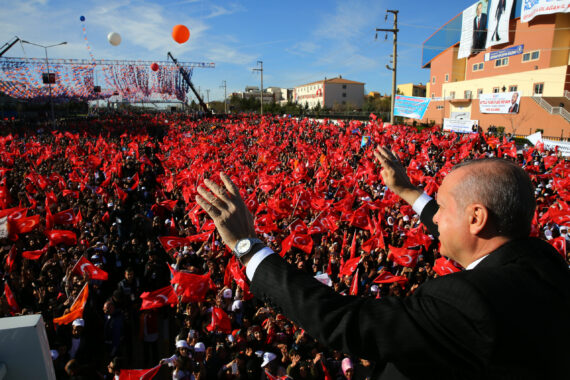 The election clock is ticking. Turkey will elect its next president, along with the next parliament, in less than two months on June 24th. Over the past ten days, Turkey has spent quite an effort to figure out whether the opposition will run with a unity candidate to counter the incumbent Erdogan. The answer has finally come out. After their unsuccessful attempts to back a unity candidate, the opposition parties one by one stated that they will run with their own candidates. While the former president Abdullah Gul has kept silent until today, the signs indicate him as the would-be unity candidate if the negotiations could have been concluded, which did not.

While the option of forming an opposition bloc is not exhausted if the elections proceed to the run-off election of the second round, the option is no longer on the table for the first round. What does it mean for Turkey’s Kurdish electorate? Would a unity candidate such as Gul receive Kurdish votes? I doubt.

The Kurdish electorate, like other ethnic groups in Turkey, have secular and religious members. The more conservative Kurds tend to vote for the incumbent AK Party while the more secular Kurds tend to vote for the HDP. Such a dichotomy is of course subject to ecological fallacy, but holds intact on the macro scale. Based on this assumption, some might think that conservative Kurds would desert Erdogan and support another conservative politician such as Gul, especially as a response to the rising nationalist discourse of the country over the past couple of years. I doubt.

The plain fact is that Erdogan is more popular than his own party amongst Turkey’s conservative Kurds. A comparison of the last two votes, November 2015 general elections and the April 2017 referendum, confirms this conclusion. During the November general elections, the HDP asked the electorate, naturally, to vote for itself. During the April 2017 constitutional referendum, the HDP asked its electorate to vote “No”. While the two votes were different in kind, one a general election and one a constitutional referendum, they both witnessed a direct confrontation between the AK Party and the HDP in the region. The parties had intense campaign processes for both votes. The difference was, multiple candidates to win seats in the former, while Erdogan and the anti-Erdogan blocs competed in the latter.

Let’s just take a look at the differences in the electoral behavior in a number of predominantly Kurdish populated cities in these two votes. While the HDP votes reached 83.7% in Hakkari in November 2015, the No votes (HDP plus all the other opposition parties) reached only 67.6% with a drop of 16.1 points. To be fair, we can simply equate the “No” votes with the HDP votes in the case of Hakkari where there is literally no support for opposition parties other than the HDP. The same story is valid also for Sirnak where the HDP received 85.5% in 2015, but 71.7% a year and a half later – with a drop of 13.8 points. The HDP also lost over 10 points in Mus and Agri. Below you can see the list of the cities where the HDP received +20% of the votes in the November 2015 elections. The table shows the comparison of November 2015 and April 2017 votes in these cities. It appears like Erdogan is a tougher challenger than AK Party for the HDP.

*Only the cities where the HDP received +20% in the 2015 elections are included. The cities where Kurds live en masse but do not vote for the HDP are excluded (e.g., Malatya, Elazig, Adiyaman).

* The CHP also has a significant mass base in Ardahan, Tunceli, and Kars, which is why the “No” votes are much higher than the HDP votes.

This table does not explain the entire story. Neither does it give us the results for the next election on June 24th. However, it gives us some insights on the electoral behavior of Turkey’s Kurds with regard to the AK Party and Erdogan vis a vis the HDP. It also tells us that Turkey’s conservative Kurds praise Erdogan highly. What it does not cover though are new developments that have occurred in the region over the past year and their expected impact on the elections in June, which is the subject for next Saturday.