Who's Who in the CDU Race for Presidency?

Will the new chairperson of the CDU cooperate with Angela Merkel, or will it give birth to a new power struggle? 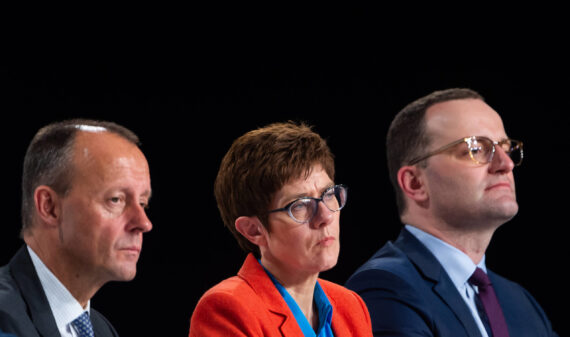 It’s estimated that the Christian Democratic Union (CDU) party convention on 7-8 December will concretize the likely future of German politics in a general perspective. On the one hand, it’s expected that a newly elected party chairperson will either cooperate with the current German Chancellor Angela Merkel in the format of a de-facto dual-head of the government or, on the other hand, trigger a new power struggle, in which Merkel won’t be able to end her current government until 2021. Thus, despite current polls stating that most Germans are satisfied with Chancellor Merkel and that circa 56 percent want her to serve out her full term until 2021, the December party convention result will clarify the uncertainties.

Will the new chairperson of the CDU cooperate with Angela Merkel, or will it give birth to a new power struggle?

There are three different candidates running for CDU chairmanship, who aim to be elected as the new leader of Germany’s -sill- strongest conservative and center-right party. While the current secretary-general of the CDU, Annegret Kramp-Karrenbauer, is as a close ally of Chancellor Merkel and who is supported by Merkel as a successor, both two other candidates are known as personalities opposing Merkel’s certain policies, such as migration and identity. Even though Friedrich Merz, a former active CDU-politician until 2009, does not accept that he has been reduced by media outlets to a so-called “anti-Merkel” image, the general political mood is perceived in this direction.

In addition, the current Federal Health Minister, Jens Spahn, who is also well-known for his sympathy regarding Austria’s populist and rightist young Chancellor, Sebastian Kurz, has also continuing hope to be successful during the party convention. But interestingly, despite some recent polls that indicate Kramp-Karrenbauer and Merz as the favorites, Spahn seems to have discovered how he might consolidate both CDU voters in general and the CDU delegates whose votes the candidates will need on 7-8 December.

Annegret Kramp-Karrenbauer, Friedrich Merz, and Jens Spahn are three candidates in the CDU race for presidency. Will the CDU remain on a pro-Merkel stance, or will it become more populist than ever?

In this sense, it was not an unexpected move when Spahn recently addressed a very important topic for the German conservative and even rightist circles, namely, Turkey. Spahn stated that the accession talks between the EU and Turkey have to be ended due to the fact that “Everyone can see it, Turkey in its present state will never become a member of the EU. It would be honest to end the accession negotiations.”

My guess is that in the next days and in particular on the convention day, all three candidates will most likely address issues such as I) Turkey in general, II) Turks living Germany, III) Muslims in Germany, IV) dual citizenship of Turks living in Germany and V) Merkel’s refugee-friendly policies. In addition to the migration issue, emphasis may be placed on the Turkish community, Turkey, and Turkey’s EU path in general. Unfortunately, the declaration of similar –populist– positions have been seen witnessed several times in the past, and one should also keep in mind that not only conservatives in Germany but also certain leftist and social-democratic parties have thoughtlessly made use of accusing Turkey in order to consolidate their party constituent.

While the German media has begun to lightly discuss the distinctive features of the three candidates, one can expect for this to be the main agenda of Germany in the upcoming days. By this, the future goals in the case of becoming a potential CDU chairperson or even the next German chancellor must be elaborated in detail.

Both leftist and conservative parties in Germany have used Turkey in order to consolidate their party constituent. This is likely to happen during the race for CDU presidency.

Due to this, some questions may be answered by the candidates in the coming weeks in order to exactly capture what their political position is, for instance, regarding relations with the United States. Do all three candidates agree with Chancellor Merkel in her backing of French President Macron’s initiative to establish a European army–even against the potential rejection by the U.S.–? What is the position of particularly Mr. Merz and Mr. Spahn with regard to these kinds of issues? We already know that Annegret Kramp-Karrenbauer is quite close to Merkel, so the positions of Merz and Spahn would be more interesting to know.

Thus, similar additional concrete topics are also of great importance. For instance, what are the positions of these three Christian Democrats with regard to Muslims in Germany, German Muslims or Islam in Germany etc? Does Mr. Merz, who is currently known and active as a very business-friendly personality, still insist on his previously rightist position with regard to a so-called “German Leitkultur,” of which he was also the initiator? Furthermore, how do the candidates describe their main differences with regard to former policies of Chancellor Merkel, who was and still is being criticized for allegedly taking leftist positions. There are also several other issues, such as certain domestic and economic promises, which have to be addressed in a concrete way. Time will show whether we will have a fruitful debate on this issue until convention day, or whether populist topics will blockade our perceptions.