Why Arab Countries are Changing their Strategies Towards Syria 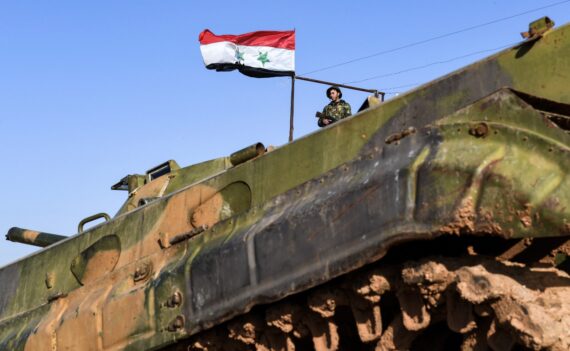 A Syrian soldier stands in a government forces' position near a deployed infantry-fighting vehicle, in the village of Hawshariya, northeast of the northern town of Manbij, on January 12, 2019. Getty Images

Arab states have seemingly changed their political approach towards the Bashar Assad regime in Syria. Some of the Arab leaderships that have previously provided political and military support to the opposition groups fighting against Assad during the past 8 years have decided to change their strategy. These countries nowadays advocate the normalization of relations with the Assad regime and the return of Damascus to its seat in the Arab League.

Jordan was one of the first countries that took a step in this regard. In October 2018, Amman decided to re-open its border crossing with Syria, which had been closed since 2015. On November 19, a delegation from the Jordanian Parliament went to Damascus in order to negotiate the normalization of relations between the two countries. Iraq is a country still having an embassy in Syria, and its foreign minister Ibrahim al-Jaafari visited Damasucs in October and called for Syria to return to the Arab League.

Arab states that once supported the opposition in Syria, are now working to better relations with the Assad regime and get Damascus its seat back in the Arab League.

This call was supported by countries such as Egypt, Lebanon, Sudan and a number of Gulf countries. On December 16, Sudan’s President Omar al-Bashir visited Syria and became the first Arab president to visit Damascus since the beginning of the war in 2011. During his visit, Bashir stated that his country is ready to support Syria’s reconstruction. Another such sign of normalization was the visit of Syrian Intelligence Chief, Ali Mamluk, to Cairo, in order to meet his Egyptian counterpart.

The most obvious development in the normalization process between the Arab countries and the Syrian regime were the announcement of the UAE and Bahraini governments to reopen their embassies in Damascus during the last week of December. Kuwaiti officials also announced that more Arab countries are expected to open their embassies in Syria in the upcoming period. It is no coincidence that Assad chose a Kuwaiti newspaper for the message he wanted to convey to the Arab world.

In his interview, Assad indicated that his government reached an understanding with many Arab countries and that he is soon expecting a normalization of relations with a number of countries. It can be argued that the Kuwaiti administration would also be considering to normalize relations with the Assad regime if the Arab League officially endorses such a position. This issue has been widely discussed in Arab political circles. A number of countries, including Lebanon and Iraq, announced their support for Syria’s acceptance to the Arab League.

There are a number of reasons as to why Arab countries have changed their strategies towards Syria. First of all, the eight-year long war in Syria has seriously consumed the energy of both regional and global actors. As the main actor responsible for the killing and displacement of millions of civilians, the Assad regime is no longer in the position of maintaining the war with its own capabilities. More, the regime does not have the capacity to overcome the estimated $400 billion cost of destruction that has been created by the war.

Assad’s most important supporter Iran also wants the war to end as soon as possible due to the financial and humanitarian costs of being involved in such a war. Other leading actors of the regional power struggle, such as Turkey, Saudi Arabia, and Egypt, also endorse similar motivations and do not want the war in Syria to extend. Countries such as Lebanon and Jordan, who feel the impact of war directly by hosting hundreds of thousands of refugees and who are experiencing a spillover of violence as a result of the war, are also willing the war in Syria to end.

Global actors that play a role in Syrian politics face similar challenges in their policy towards Syria. U.S. President Donald Trump’s recent announcement of withdrawal from Syria is a sign of these challenges. Trump has further suggested that regional actors, including Saudi Arabia and the UAE, should be playing a more decisive role in solving the Syrian crisis. This new approach explains how the U.S. administration has preferred to play a lesser role in the Syrian crisis.

Another global actor that has been involved in the Syria crisis is Russia. More recently, Moscow seems to be more concerned about the increasing cost of its involvement. As the Russian military losses have exceeded 200 casualties, Putin’s administration feels more pressure exerted from the public to conclude its campaign in Syria. To this end, both Russia and Turkey have increased their diplomatic activities in order to find a peaceful solution to the crisis in Syria.

Another reason for Gulf countries to set a new strategy on Syria is because these countries work in coordination with the U.S. in Middle East politics. The UAE has been the leading country to work in parallel with the U.S. establishment. The UAE, which is considered as a subcontractor for the long-term policies of the U.S., felt the need to make a similar position with Washington on Syria. Trump’s announcement of withdrawing U.S. troops from Syria was a message for countries like the UAE and Saudi Arabia to re-design their policies as well. Trump’s message forced these countries to play a more active role in this regard. In the following period, the UAE and Bahrain were the first countries to rush to open their embassies in the Syrian capital.

Trump’s announcement of withdrawing U.S. troops from Syria was a message for countries like the UAE and Saudi Arabia to re-design their policies as well.

Arab states have come to the realization that Turkish and Russian involvement in Syria is a permanent one. This situation has been clearly observed in the context of diplomatic efforts between Moscow and Ankara, which aim to bring the war to an end. Such intensity in cooperation between the two countries and Turkey’s military achievements in operations Euphrates Shield and Olive Branch compelled some Arab countries to become more active in order to restrict Turkey’s increasing influence in Syria.

Four major dynamics can be considered as a result of the new strategies that Arab countries are pursuing towards Syria. First of all, it is understood that the Assad regime will continue to hold its grip on power for a further period, if not a long one. Secondly, Russia and Turkey have become permanent actors in Syria. If the U.S. withdrawal is certain then Washington’s allies have to fill the gap in this regard. Finally and most importantly, all regional and international actors have come to the conclusion that the war in Syria has to end and the reconstruction of the country must begin. Additionally, the Syrian officials who are responsible for the worst humanitarian catastrophe in the current century must be punished for their role.