Why are Syrian Rebels Losing Ground in Idlib?

While the Syrian opposition enjoyed important support within Syrian society, HTS is logically viewed as Al-Qaeda – a group that does not enjoy popular support among Syrians. 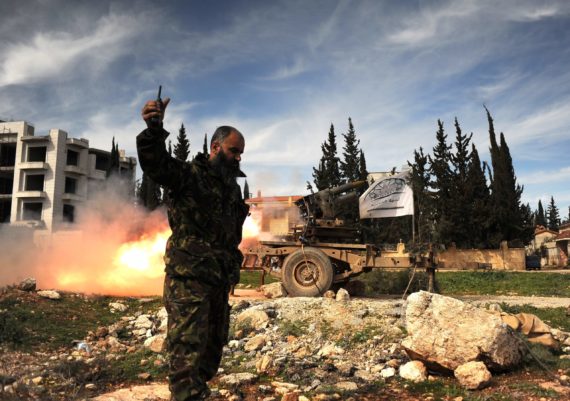 A member of the Syrian opposition group linked to the Damascus Front launches a rocket towards forces loyal to the Assad regime during the clashes in Aleppo, Syria. Salih Mahmud Leyla, Anadolu Agency

The Assad regime and allied militias started an operation from northern Hama towards Abu Dhuhur military airport, capturing dozens of villages each day. Backed by Russian airpower, forces loyal to the Assad regime are trying to capture areas east of the trainway linking Damascus to Aleppo. Following the decrease of DAESH presence in Syria, loyalist forces have been able to find more fighters ready to fight against Syrian rebels. Syrian rebels on the other hand are facing several difficulties. The dominance of Hayat Tahrir al Sham (HTS) and its weakness against loyalist forces, supply shortages, internal disputes between Syrian rebels and HTS generates trouble among the rebel forces.

In contrast to the rebels in Idlib and surrounding areas, the Assad regime had frontlines against DAESH. The terrorist organization and loyalist forces fought on several levels which affected the manpower of the regime. While the Assad regime tried to compensate its lack of manpower with foreign Shia fighters backed by Iran, the military attitude of DAESH was focused on causing as much damage as possible. As DAESH shrunk into small pockets in Syria, the threat posed by the group against the Assad regime effectively decreased. This allowed for loyalist forces to send a new batch of fighters to fight against the Syrian rebel factions.

In addition to this general effect of DAESH, the Assad regime allowed the pocket of DAESH in Hama to cross its areas in order to fight against Syrian rebels in northeast Hama. Firstly, Hayat Tahrir al Sham, which controls the area, was surprised by the attack of DAESH and lost several villages in hours. After this setback, HTS began a counter-assault, re-taking parts of the villages it lost. During the time the DAESH pocket attacking HTS shrunk into some villages, loyalist forces began their operation against territories controlled by Syrian rebels. This gave DAESH a momentum to re-group and attack HTS again, capturing several villages. DAESH was also prepared against the Assad regime, but no clashes between them in the area were reported. By allowing DAESH to pass its area towards northeast Hama, the Assad regime killed two birds with one stone.

Since the United States decreased its support for the Syrian rebels, in contrast to Russia and Iran who massively increased their support for the loyalist forces, Syrian rebels have constantly been losing ground. While a Russia-backed regime operation from north Hama to south Idlib in October 2015 ended in a disaster for the loyalists, this time they cannot be stopped. During the Hama operation in 2015, Syrian rebels did not lose one village and destroyed dozens of tanks. Syrian rebels backed by the MOM and MOC operation room used 115 TOW guided anti-tank missiles and 25 other ATGMs in one month. The effect of the TOW missiles provided by Saudi Arabia and the U.S. were highly sufficient. Some speculated that the TOW will have the same impact on the Syrian Civil War as did the Stinger MANPADs used in the war in Afghanistan. In contrast to the 115 TOW missiles used in October 2015, Syrian rebels used 8 TOWs in December 2017 across Syria.

In addition to the strategic TOW missiles, Syrian rebels also lost foreign support in terms of provision of weaponry, logistics, humanitarian and structural aid. Especially since the increasing Russian intervention in Syria, the U.S. and Saudi Arabia began to decrease their supplies to Syrian rebels. More, due to the increasing dominance of HTS, European countries also began to cut the structural and humanitarian aid provided to rebel-held areas in northwest Syria.

Hayat Tahrir al Sham, as an alliance of the former Al-Nusra Front and other brigades like the Nureddin Zengi Movement and Jaysh al Ahrar, formed the strongest militia in Idlib and its surroundings. Even if the Nureddin Zengi Movement and Jaysh al Ahrar broke their alliance with HTS over disputes that followed a HTS attack on other Syrian rebel factions like Ahrar al Sham, HTS still remains the strongest faction on the ground. After HTS attacked Ahrar al Sham and captured the strategic Bab al Hawa border crossing, the dominance of the group in the area became clear. Even though HTS dominates Idlib and its surroundings, its popularity was massively affected due to the group’s aggressions against other Syrian rebel brigades including Jaysh al Mujahiddeen, Jaysh al Islam, Thuwwar al Sham, Suqour al Sham, Sham Front, Nureddin Zengi Movement and Ahrar al Sham.

During these attacks, HTS captured several weapon depots of Syrian rebels and imprisoned influential personalities of their factions. The attacks led to the crush down of all of these factions in Idlib besides Ahrar al Sham and the Nureddin Zengi Movement. Ahrar al Sham was heavily weakened after the HTS attacks, and the Nureddin Zengi Movement managed to repel HTS attacks on its positions. While the HTS managed to steal many weapons, this came at the cost of the cut of foreign supplies to the Syrian rebels. The group gathered more weapons after its aggressions, however, the overall amount of weapons in the area decreased due to this stop in foreign supplies.

HTS also formed the so-called Salvation Government as a pseudo civilian administration of all rebel-held areas in Idlib and its surroundings. Prior to the formation of the Salvation Government, rebel-controlled areas were managed by local councils who were linked to the Syrian Interim Government, which was formed by the exile-opposition in 2013 and which enjoys recognition of several countries who backed the Syrian uprising against Bashar al-Assad.

Another important weakness is grounded in the low popular support of HTS in Syria. While the Syrian opposition enjoyed important support within Syrian society, HTS is logically viewed as Al-Qaeda – a group that does not enjoy popular support among Syrians. Many Syrians rejected to fight against the Syrian rebels, yet the same cannot be said for HTS. Many want to fight against the Assad regime, but just not in the name of Al-Qaeda.

After a huge loss of territory, many accusations of treason was formulated by several actors on the ground. One can sum them in two points of views: Firstly, HTS is accusing rebels who attended the Astana negotiations with betrayal and is refusing to send reinforcements in order to stop regime operations. Second, Syrian rebels are accusing the HTS of withdrawing from the frontlines after a brokered deal with Russia. Syrian rebels argue that HTS was the dominant force and claim that the group rejected to give Syrian rebels their weapons back despite them sending fighters for support. It must be noted that accusations of betrayal are normal when losing ground rapidly.

There are many reasons why Syrian rebels are losing ground in Idlib. However, the situation can be summed up in three points. Firstly, due to losing foreign, popular and logistic support, secondly due to the infighting and mistrust between themselves, and finally, due to the DAESH factor. It is not clear how the territorial gains by the Assad regime are in agreement with the Astana negotiations, which officially tried to de-escalate tensions on the ground. The Turkish Foreign Minister accused the Assad regime in targeting the moderate Syrian opposition with the pretext of fighting Al-Nusra, stating that this behavior endangers the negotiations in Sotchi and Astana. By supplying Syrian rebels with assistance, Turkey may want to remind Russia how costly military operations in Syria could get and thus put pressure on Moscow to stop the Assad regime violating the ceasefire.