Why are You Afraid of Calling Christchurch a Terrorist Attack?

The Western world should be aware of an increasing danger caused by a new wave of racism and anti-Islamic movements that glorify and that are inspired from various historical incidents, including the Crusaders and Nazis. 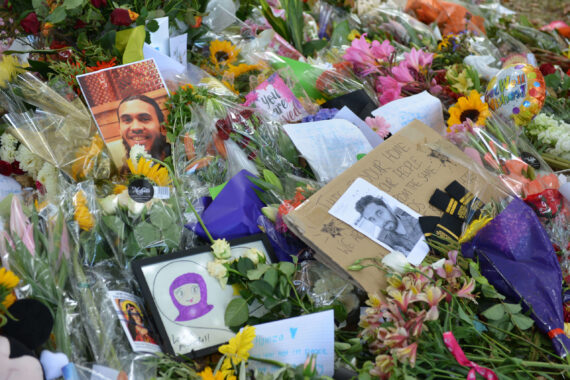 People place flowers at memorial sites as a tribute to victims of the Friday’s terrorist attacks on two mosques that left at least 50 people killed in Christchurch, in New Zealand on March 19, 2019. Anadolu Agency

The terrorist attack on two mosques in New Zealand’s Christchurch last Friday caused a global shock wave. At least 50 people, who gathered for Friday congregational prayers, were murdered. 50 others were also injured during the mass shootings. Subsequent to the massacre, several world leaders showed solidarity with the victims. Besides the global reactions, New Zealand’s Prime Minister, Jacinda Ardern, who became PM at the age of 37, has been particularly applauded for her approach to the Muslim community in the country. Her appearance in Christchurch subsequent to the terrorist attack sent a clear message against both terrorism and anti-Muslim hatred across the world.

Describing the worse peacetime mass killing in her country as terrorism was an important step, which unfortunately lacked in other Western countries. Ardern’s wearing a black headscarf and hugging relatives of the victims was a symbolic act by her that has been received with much emotions, not only by the Muslim community in New Zealand, but the global Islamic world. Such a warm and simple act is still lacking in some Western countries. For instance, Germany’ Interior Minister still insists that Islam does not “belong” to Germany and that there is no tense mood against Muslims despite regular Islamophobic attacks. There are approximately 4-5 million Muslims living in Germany.

In this sense, it was also not a big surprise that some world leaders did not prefer to use the term terrorism and deliberately circumvented this description, while others such as Chancellor Merkel and her Social Democrat coalition partners (e.g., SPD chairperson Andrea Nahles or German Foreign Minister Heiko Maas) described the massacre as a terrorist attack and stressed their solidarity with Muslims. On the other hand, leaders such as President Trump did not name the incident as a terrorist attack on Muslims but rather as a massacre on the citizens of New Zealand. However, one has to stress that these people were not murdered because they were citizens of a specific country. Rather, they were targeted because of their religion – Islam. If one does not address the problem by its name, we will not be able to overcome future challenges.

Why doesn’t the CDU chair Annegret Kramp-Karrenbauer question the roots of anti-Muslim hatred? Where do such racist stances flourish? How can the Western world, policy makers, and the media, prevent any future attacks similar to the recent one?

But what might be behind the preference of such careful words contrary to openly naming the mass shooting as a terrorist attack against Muslims? Elaborating a recent statement made by chairperson of the German Christian Democrat Union (CDU), Annegret Kramp-Karrenbauer, might be an appropriate opportunity to notice the lack of empathy regarding the recent massacre. In her recent tweet the CDU leader explicitly said “No matter against whom hate, violence and terror is directed, at the end people die, children lose their parents and parents lose their children. There can be no explanation for that and no apologize.  In memory of the victims in #christchurch never doubt this.”

The statement sounds very political and as if in solidarity. But actually, it’s just an expression to circumvent the actual roots of the problem. To state that there is “no explanation,” by preferring words like “no matter against whom it is directed,” the reader needs to ask why there is an attempt to blur some specific reasons. Why doesn’t CDU chair question the roots of such anti-Muslim hatred? Where do such racist stances flourish? How can the Western world, policy makers, and the media, prevent any future attacks similar to the recent one? These are all issues that AKK deliberately fails to address. Why? All in all, such statements by “conservative” leaders across the Western world do not show any sincerity. A likely reason of this is not to scare off potential far-right voters. But this type of a perception cannot facilitate solving this immediate problem.

Statements by “conservative” leaders across the Western world do not show any sincerity. A likely reason of this is not to scare off potential far-right voters. But this type of perception cannot facilitate solving this immediate problem.

Nevertheless, in addition to some symbolic solidarity acts by leading political figures, there have been many positive reactions from the global non-Muslim community. These can be interpreted as signs for peace in a global context. These include a woman from New Zealand who tried to hide a Muslim from the mass shooting, or people who showed their subsequent solidarity by visiting Muslim communities in their own countries’ neighborhood, or Jews showing solidarity with Muslims in Manhattan.

Of course, these acts of solidarity are more than welcome and carry immense significance. However, one should also appreciate that these gestures should not dominate the main problem, namely the killing of people who have been murdered only due to their religion. Therefore, global policy makers have to reconsider their main position and stop demonizing Muslims because of their rightly struggle against some marginal violent groups. The same goes for global and in particular, irresponsible Western media outlets, which, sometimes, deliberately spur global anti-Islamic hatred.

The Western world should be aware of an increasing danger caused by a new wave of racism and anti-Islamic movements that glorify and that are inspired from various historical incidents, including the Crusaders and Nazis.