Why Did the CHP Change Its Position Over Syria Again?

The CHP’s flip-flopping position on the Syria issue shows a clash of opinions between two different blocs within the party. 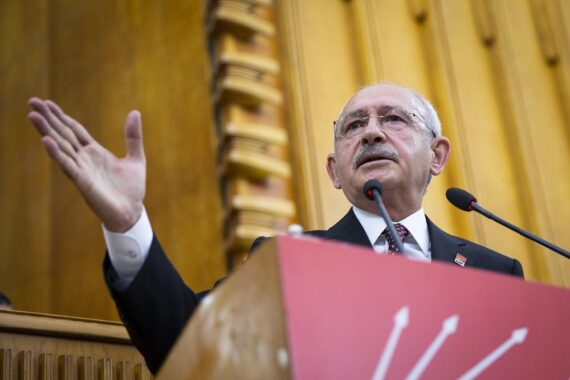 Chairman of the CHP, Kemal Kilicdaroglu speaks during his party's group meeting at the Grand National Assembly of Turkey in Ankara, Turkey on October 22, 2019. (AA)

After Turkey began its military operations in Northern Syria on October 9, public debate focused on how the military operation would affect Turkey’s relations with Western countries, especially the US, and whether the operation would change the power balance in Syria. Turkey and the US then came to an agreement to suspend the operation for five days while the US oversaw the withdrawal of the YPG from the region. After the de-escalation of the conflict in Northern Syria, Turkey’s main opposition party, the CHP, changed its position towards the operation, again. As I wrote earlier, from its inception, Operation Peace Spring received the support of all of Turkey’s political parties, except the HDP. Even the resolution of the Turkish Assembly renewing authorization for the Turkish Armed Forces to launch a military operation in Northern Syria received the support of the AK Party, CHP, MHP, and Iyi Party. It was the first time since the July 15, 2016 coup attempt that all political parties were unanimous on an issue.

However, this did not last long. Turkey’s opposition parties adopted their critical positions again. Especially the CHP, which turned back to its harsh position towards the government’s Syria policy. Indeed, even if the CHP had supported the military operation from the beginning, there was a lot of criticism from the party’s pro-HDP circles towards the operation.

For instance, Canan Kaftancıoğlu, head of the Istanbul branch of the CHP, criticized Turkey’s military operation in a written statement and underlined that the operation should not be conducted. Moreover, Sezgin Tanrıkulu, the CHP’s Istanbul MP, blamed Turkey for “invading” Syrian territories and killing civilians living in that area.

The CHP’s flip-flopping position on the Syria issue shows a clash of opinions between two different blocs within the party. While Kemalist and nationalist circles support the operation without any hesitation since they see the operation as Turkey’s right to secure its borders, pro-HDP circles within the CHP are clearly against the operation, and do not acknowledge that the CHP has supported to the operation from the start. The prominent names of this pro-HDP circles, Canan Kaftancığlu, Sezgin Tanrıkulu and Aytuğ Atıcı have been explicitly criticizing the operation and calling it an “invasion”. When it comes to Kemalist and nationalist circles, the leading figures of this group including Muharrem İnce, Umut Oran, and Tanju Özcan supported the military operation. Thus, it is obvious that the recent shift in the CHP’s position after Turkey’s agreement with the US over Syria is also related to the dominance of the pro-HDP group in the party politics. Since the members of this group were clearly against the operation from the beginning, and did not favor the official stance of the party that supported the operation, their hegemony in the party caused the shift in the CHP’s position.

Why did the CHP support the operation although pro-HDP circles are dominant in the party? When the operation started on October 9, the mobilization of nationalist sentiments in the country forced the CHP to support the operation. Although the pro-HDP circles of the CHP were clearly against to the operation, it was not an option for the CHP to oppose to the operation while all of the Turkish public was united in favor of the operation. In other words, the CHP had to perform a pragmatic action to prevent a negative reaction from the public, especially its voters, a certain amount of whom are nationalist voters. Nevertheless, rising tensions in US-Turkey relations, the escalation of a diplomatic crisis with the US, as well as the ambiguity of Russia-Turkey relations during the operation forced the CHP to change its discourse. At this point, the pro-HDP group’s position towards the Syria issue became dominant in the party’s official stance.

The recent statements of the CHP’s Chairman, Kemal Kılıçdaroğlu, reflects the recent shift in the discourse of the party and the dominance of pro-HDP groups. Even if Kılıçdaroğlu is closer to the pro-HDP groups rather than Kemalist and nationalist circles as the chairman of the party, he had to support the operation because of the increasing nationalist sentiments in Turkey. Nevertheless, Kılıçdaroğlu criticized the government after the agreement and said that Turkey should not be involved in the Syrian issue anymore and should stay away from “the quagmire of Middle East”. Moreover, to strengthen his position in the political atmosphere where nationalist sentiments are still on the rise, Kılıçdaroğlu focused on Trump’s letter to Erdoğan and problematize it as a matter of honor for Turkey.

Indeed, incidents in the last two weeks show that the CHP’s position towards the Syrian issue is more compatible with Western perspectives, as the party does not see the establishment of a Kurdish state in Northern Syria as a threat to Turkey. This party position is shaped by the former bureaucrats of the Foreign Ministry who are influential within the party and in pro-HDP circles. This group includes prominent names within the party such as Ünal Çeviköz and Faruk Loğoğlu, and since the beginning of the Syrian crisis this group defended the idea that the Turkish government should have negotiated with the Assad regime. According to their approach, Turkey’s quest to build a safe-zone on the border is nothing but a “demographic engineering project”, as was stated in the final report of the CHP’s Syria Conference. Since these groups were critical of the operation from the beginning, their discourse became the main determinants of the CHP’s position in time.

Because of this, Turkey’s operation to Northern Syria showed again that pro-HDP groups within the CHP are more powerful than its Kemalist and nationalist circles. It also proves that the pro-HDP group dominates the party’s discourse on critical issues. Even if the increasing nationalist sentiment during the operation forced the party to support the operation in the beginning, it did not take so long for the CHP to adopt its traditional approach to the Syria issue which is highly dominated by the pro-HDP group.