Why did the CHP hold a Conference on Syria?

The CHP's controversial Syria conference report urges the Turkish government to work with the Syrian regime for a resolution and lacks serious attention to the YPG’s threat to Turkey’s security in the region. 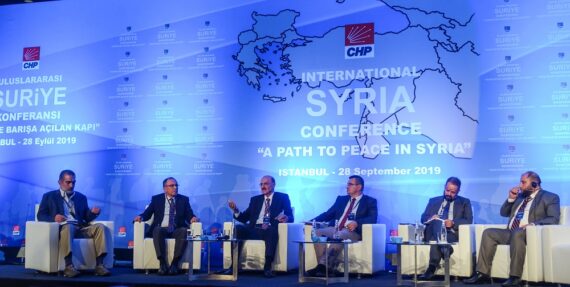 Turkey’s main opposition party has held a conference in Istanbul on Syria recently. While the conference was mostly conducted with the participation of academics and journalists interested in the issue, its aim was to bring together middle level officials from the Syrian government in an informal platform. However, the conference could not achieve its intended impact since it did not include broader participation and the outcome of the conference was one sided.

Before understanding the reasons behind holding the conference, it is necessary to evaluate the critical junctures of the CHP’s Syria policy. After the Syrian civil war erupted in 2011, the CHP’s approach to finding a resolution to the conflict was to support a power-sharing mechanism bringing together all parties, including the Assad regime. From the CHP’s perspective, involvement of representatives of the Assad regime was crucial to a peaceful transition. In accordance with this, the CHP made three formal visits to Assad from 2011 to 2013.

However, after the war escalated and reports by international organizations proved that the Assad regime used chemical weapons against civilians in 2013, the CHP ended meetings with the regime and adopted a relatively neutral approach compared to their previous one. Even with the rising nationalism in Turkey after 2016, the CHP kept this approach towards the Syrian conflict. For instance, the party supported cross-border military operations in Syria although it had reservations on the issue.

Nonetheless, the party has been experiencing another shift in its Syria policy and the conference reflects this change. Since the last year, the CHP had again started to underline the importance of Assad’s involvement in the negotiation process. Because of this, the party invited representatives of the regime to the conference, but the Ministry of Foreign Affairs did not give them permission to enter Turkey.

It is not exaggeration to say that since the CHP has strengthened its position in domestic politics, it has also started to deal with foreign policy issues more. The party’s relative success in the latest local elections accelerated the CHP’s quest for a new strategy in foreign policy. Thus, the CHP’s recent shift in its Syria policy should be evaluated within this framework.

Nevertheless, the party did not completely leave its relatively neutral approach in Syrian conflict. Since a potential cross-border military operation is on the table, the CHP did not invite any official YPG representatives to the conference. But at the same time, the party did invite some pro-YPG experts such as Professor Amy Austin Holmes to hear their perspectives.

After the conference, the invitation of Amy Austin Holmes caused a crisis for the party, and the decision to invite her was harshly criticized especially on social media. Beyond this issue, the most problematic issue of the CHP’s initiative was the final declaration of the conference.

As the report states, the party sees the safe zone as “demographic engineering” which may deteriorate the future relations between various ethnic groups in the region. According to the report, the stakeholders should count on peace building rather than further escalation of the conflict to find an effective solution. Furthermore, the party clearly stated that they want the Turkish government to work with the Syrian regime for a resolution of the conflict. Another problematic issue was the final declaration report’s lack of attention to the YPG’s threat to Turkey’s security in the region.