Iran’s ambivalent policy fuels distrust of Turkey’s decision makers towards Iran. If Iran continues to follow this policy, there will be no concrete and constructive relations between the two countries. 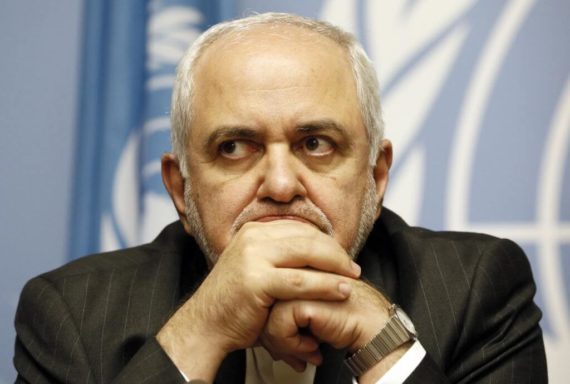 Iran's Foreign Minister Mohammad Javad Zarif at a press conference to sum up the ministerial meeting of the Astana troika held in the run-up to the first session of the Syrian Constitutional Committee. Photo by Alexander ShcherbakTASS via Getty Images, October 29, 2019

On 9 October, 2019 the Turkish Armed Forces and the Syrian National Army launched a joint military operation in the east of the Euphrates against the YPG, the Syrian extension of the PKK terrorist organization. Turkish forces captured many areas in a short time, including Tal Abyad and Rasulayn. Right from the onset, there has been an extensive campaign against Turkey conducted by Western governments and media outlets. Many fake news stories were circulated on social and conventional media aiming to undermine the ethical ground of the operation. Baseless allegations such as bombing civilians or conducting ethnic cleansing were attributed to Turkey. Despite all this, Turkey continued its operation decisively and with the highest sensitivity for civilians. In fact, Turkey was the only country that has paid attention to the humanitarian needs on the field when compared with the US, Russia, and Iran. One can determine this quickly by looking at the post-operation pictures of the areas in which these countries operated.

Nevertheless, Turkey did not exclude any political solution which would meet its objectives. In this regard, on October 17, Turkey agreed with the US to halt the military operation temporarily. Accordingly, the YPG members were supposed to withdraw from the area that Turkey designated as the safe zone within 120 hours. Even though this plan did not function properly, US troops pulled back from the area. On October 22, Turkey turned to Russia and made another deal to maintain its border security in Sochi. The Sochi agreement paved the way for securing Turkey’s borders and was marked as a great diplomatic achievement. With these two agreements, the YPG’s dream of creating a separate state inside Syria collapsed. Even though Turkey eliminated the YPG threat on its southern border, and Iran announced its welcome of the new Sochi deal, Iran’s stance with regards to the operation tells a lot about its calculations in Syria and possible developments in the near future.

From the first minute of the operation Iran condemned Turkey’s actions. Many in Iran, ranging from government to ill-informed lay citizens, raised their objections to Operation Peace Spring. President Rouhani stated that even though he understood Turkey’s security concerns, there were other ways to solve problems such as dialogue. Iran’s Foreign Minister Javad Zarif emphasized the 1998 Adana Agreement and encouraged dialogue between the Turkish government and the Assad regime. The Ministry of Foreign Affairs released a statement asking Turkey to stop the operation and pull back. Many MPs in the Iranian parliament, especially from the Kurdish populated areas, harshly criticized Turkey’s action. Ali Larijani, the Speaker of the Parliament, canceled his scheduled visit to Turkey as did the former president of Iran Mahmoud Ahmadinejad. Friday prayer leaders of the various provinces slated Turkey in their sermons. Some protesters gathered around the Turkish Embassy in Tehran and wrote hideous slogans on the Embassy’s wall. While others protesting around the country burned Turkish flags. Many artists, musicians, and film directors protested against Turkey on social media.

It is possible to detect a shared language and the usage of a particular discourse about Turkey’s operation in these protests. The discourse was exactly the same which Western countries tried to disseminate. It is a gripping example of how quickly an anti-Western country can adopt to a biased Western discourse when it comes to Turkey.

Iran sacrificed its long term stability in the region for its short term geopolitical gains.

Even so, not all sections of Iran protested and objected to the operation. Some members of the parliament from the regions inhabited by Turkic Iranians intensively opposed the anti-Turkey rhetoric. They gave reminders about the PJAK’s terrorist actions against civilians and of the security personnel and Iranian people who lost their lives fighting the PJAK, the Iranian branch of the PKK terrorist organization. Many Turkic people living in Iran sided with Turkey on social media. Some football players of Tractor Sport Club, a football club of the Azeri city of Tabriz, and the majority of its fans expressed their support for the operation. Diversity of reactions in Iran to Turkey’s Operation Peace Spring wonderfully depicts the range of Iran’s ethnic heterogeneity and the role of ethnicity in political life.

Along with ethnicity, other factors also made a difference in Iran’s daily politics, such as religious sects, political positioning, and institutions. There are various elements and power centers which have voiced their criticism towards Turkey’s action. Although there are several centers of power influential in Iran’s general politics, this cannot be regarded as a polyarchy, as described by the influential political theorist Robert Dahl. According to Dahl, within democracies, there are many power centers which function as stabilizers. Therefore, one power bloc cannot assume power by itself but must share it with others. Dahl describes this as “rule by many”. However, the real picture of Iranian politics exhibits a hierarchy rather than polyarchy. Some institutions have more power than others. At the top of the system, the supreme leader steers the whole political process. Most of the time, he acts as an arbiter between different blocs, but at the end of the day, he has the last say on crucial matters. Therefore, the establishment, led by the Supreme Leader, could control the anti-Turkey discourse circulated among Iranians. However, events did not unfold in this way.

In fact, in the last summit of the leaders in Ankara on September 16, 2019, Rouhani had acknowledged Turkey’s security problem in northern Syria and said Turkey had a right to protect its borders. However, he approached things differently when it comes to Operation Peace Spring. What could motivate Iran to act against Turkey’s security interests in Syria? Why would Iran oppose Turkey’s involvement in Syria?

Firstly, Iran sees Syria as a hallway to reach the Mediterranean Sea and Lebanon, where Hezbollah is based. In its geopolitical vision, Syria has an indisputable place. Secondly, Iran invested huge money and manpower in Syria from the beginning of the civil war in 2011. It is understandable from Tehran’s point of view that it does not want to lose influence in Syria. Put differently, Iran wants to see the fruits of this investment. In this context, Turkey is regarded as another stakeholder, and its involvement is seen as a challenge to Iran’s hegemony. And lastly, Iran is not happy with Turkey having a close relationship with Russia. Turkey got the support of Russia in Operation Olive Branch and in Operation Peace Spring. Even though Iran allied with Russia in 2015 to keep Assad in power, its long-term strategic goals differ. In Russia’s perspective, there is room for Israel’s security perceptions regarding Syria and Iran. But Iran’s security perceptions and vision for Syria require a limitation of Israel’s activities. That is why Hezbollah has such importance and Iran wants to keep Syria for Hezbollah’s focus.

Nevertheless, Iran has its own PKK problem as well. The PKK’s Iran branch the PJAK has been active for years in Iran and took several lives of Iranian people. If the YPG gained territorial sovereignty in Syria, Iran would be vulnerable to terror attacks like Turkey. This would put the region’s stability and security in jeopardy. Yet, Iran voluntarily closed its eyes to that reality. In other words, Iran sacrificed its long term stability in the region for its short term geopolitical gains described above. However, Iranian decision-makers fail to see that their short-term gains are also at stake in the light of the latest developments in Syria. With each passing day, Russia is becoming less keen to allow Iran’s activities and influence in the region. Russia allowing Israel airstrikes against Iranian forces in south Syria is an important manifestation of this. Moreover, losing Turkey’s support will add additional costs.

Iran’s attitudes undermine a possible Turkey-Iran alliance related to border security and general regional problems. Iran’s ambivalent policy fuels distrust of Turkey’s decision makers towards Iran. President Erdogan lately expressed his disappointment with Iran’s actions and reminded of Turkey’s support to Iran in the matters of sanctions and nuclear activities. As long as Iran continues to act in this way, there will be no concrete and constructive relations between the two countries. This would result in the further increase in regional problems, and Iran will most likely be even more isolated in the face of sanctions and other instruments that the West has been using against them for some long time.