Why Does the Opposition in Turkey Polarize Society?

Usually accompanied by the use of virulent and exclusionary language towards the rest, polarization of society occurs by splitting it into two ideologically rival or hostile camps and carries the danger of dragging it on the verge of collapse and fragmentation. 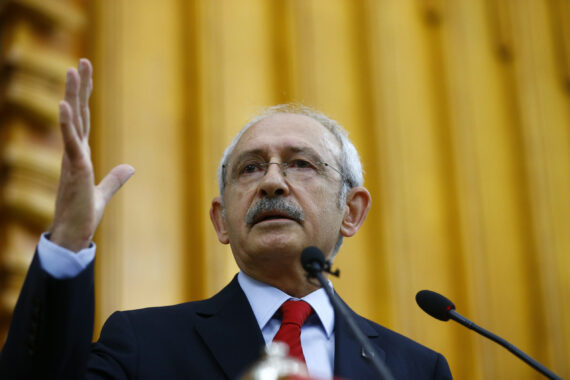 Kemal Kilicdaroglu, Chairman of the Republican People's Party (CHP), gives a speech during his party's group meeting at the Grand National Assembly of Turkey (TBMM) in Ankara, Turkey on March 13, 2018. Anadolu Agency

In recent years Turkish politics is claimed to suffer the absence of a strong opposition which is expected to be an alternative to the existing AK Party rule. This absence seems to stem from the fact that the opposition tends to limit itself with merely obstructing or subverting AK Party’s endeavor to rule the country. Indeed, while the AK Party insistently takes offensive steps to enlarge and deepen its clout in society, the opposition remains in defense to contain the AK Party’s moves by resorting to a policy of polarization. The opposition resorts to a feeble and notorious policy, for it naturally does not want to lose the final front – which is its own secular societal base, to an aggressive rival in the political struggle for power. Political opposition in Turkey thus seeks to keep society divided and polarized, most often betting on the age-old dichotomy of secular versus conservative in order to consolidate its societal base and protect it from external infiltrations.

As this policy of polarization yields results, which happened in the Gezi Park protests in 2013 and June 7, 2015 elections, the opposition’s faith in polarizing has grown stronger and keeps bending towards it. After each incident of having successfully driven a wedge between the AK Party and its own “natural” constituency, the opposition feels triumphant and presumes its divisive policy to be politically satisfactory for the time being. Hence, the opposition often feels less pressure on itself after these rare high times and grows reluctant to change their strategy of governance. Ultimately, it then becomes unnecessary for the AK Party to carve up an alternative and better political project to broaden its sphere of influence and appeal to those outside of its electorate, when polarization, in effect, assists them. In the opposition circles however, sadly, the pleasure of subverting the ruling power usually appears to take precedence over the burden of building a better one.

This results in a situation where the opposition only speaks to a limited audience, which constitutes no more than one third of the society. This is usually accompanied by the use of virulent and exclusionary language towards the rest; the majority of society who back the AK Party rule, remain neutral or undecided. This leads to further polarization of society by splitting it into two ideologically rival or hostile camps and carries the danger of dragging it on the verge of collapse and fragmentation.

Some in the opposition firmly believe that the policy of polarization should be extended or rather radicalized to an extent that it lays the foundation of political struggle under extraordinary conditions. By extraordinary conditions or times, they refer to a situation where stable democratic politics ceases to exist, where rules and norms become subversive. This reveals that the opposition oscillates between two policy options: limiting itself to make AK Party rule more difficult, yet remaining within the limits of democratic politics or leading the society to pre-political or non-democratic political conditions by mobilizing the streets.

With its democratic or non-democratic forms, the opposition seems to be obliged towards the policy of polarization. In the last 15 years, the opposition that shaped around a secularist identity has, first of all, lost the control of the state. The internal split within the secularist camp between the liberals and the nationalists played a crucial role in their defeat. Whereas the nationalists resisted the AK Party, as epitomized by the Republican rallies in 2007, many liberals provided overt support to the process of democratization. Thus, as the conservatives have gradually poured into the place of power or the state, the opposition has retired to the societal realm or the periphery. The conservatives have replaced the secularists at the center.

Till now, even though the secularist opposition lost the control of the state, it has become, to an extent, successful in protecting its societal lines and contain infiltration from outside. Nevertheless, for now it is miles away from changing its policy from defense to offense, or rather polarization to expansion. The AK Party still calls the shots in the country. It is the sole hegemonic power that keeps seeking alternative ways to expand in the social realm. Even worse, provided that the AK Party is deposed from power in the 2019 elections, the secularist actors do not know how, or rather lack necessary political tools to expand into society. Not to mention their lack of a cogent plan to control the state and tackle with basic security and economic problems of the country.