Why is Turkey Backing President Maduro?

Turkey and Venezuela share this political model: democracy at home, autonomy abroad. They support each other since they share similar interests and values. Hence, there is no need to be surprised about Turkey’s support for President Maduro or denigrate it as third-worldism. 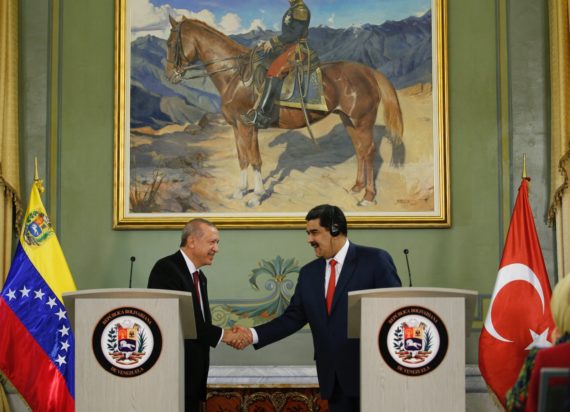 U.S. President Donald Trump declared that the U.S. officially recognizes Juan Guaido, the current president of the Venezuelan National Assembly, as the interim president of Venezuela. He asserted that the Assembly is the only legitimate governing organ formed by democratic means. And he put forward that President Nicolas Maduro, who recently started his second term in office, is democratically illegitimate. He, therefore, has offered his country’s support to the protestors who have taken to the streets to topple the Maduro government. The U.S. President also vowed that his government will continue to put its political and economic resources in the service of improving Venezuelan democracy. More, he has urged allying countries to follow suit. Countries such as Canada and Brazil immediately responded positively to Trump’s call.

Nevertheless, some other countries protested the U.S.’s decision to sideline President Maduro. Turkey is one of them. President Erdogan issued a statement highlighting how deeply upset he is about President Trump’s move to subvert the democratically elected Maduro government. It is no question that Turkish President Erdogan and President Maduro developed very close personal relations in recent times. They paid reciprocal visits and expressed the desire to develop political, cultural, and economic relations between the two countries.

After Trump’s statement to subvert Maduro, the Turkish people, at least the majority of them, have reacted very harshly by calling out the U.S. involvement as a coup d’etat.

One of them is the sensitivity towards the national will in politics. Both countries organize their political institutions and norms based on the basis of centrality of the national will. Individualism and bureaucratic oligarchy, the two alternative bases for organizing political life, are not favored. Both countries are ruled by a presidential system. And the presidential system, which is practiced in both countries, is formed around a political understanding that the people are represented without any mediation. The president is assumed to represent the people and act on their behalf.

This shared democratic populist government model serves to allow Turkey and Venezuela to establish close relations. Strong in one country means strong in the other. The close relations comprise not only on the state level, but also on societal level. After Trump’s statement to subvert Maduro, the Turkish people, at least the majority of them, have reacted very harshly by calling out the U.S. involvement as a coup d’etat. This is understandable because Turkey only just witnessed a bloody coup attempt. The Turkish public have drawn similarities between the unsuccessful coup attempt of July 15, 2016, and the Venezuela case. Many think that the U.S. directly or indirectly support its local proxies in order to subvert the elected government.

Turkey’s support to Maduro is no surprise. Turkey and Venezuela share a political model: democracy at home, autonomy abroad. They support each other since they share similar values.

This leads us to the second dimension. Both Turkey and Venezuela adopt a foreign policy that seeks to increase its autonomy. Of course, all states in the international system desire to have a high degree of autonomy. Thus, states can be classified into two categories on this basis; states that are satisfied with their level of autonomy and uphold the status quo, and states that are not satisfied with their level of autonomy and tend to uphold revisionism. Turkey and Venezuela are revisionist states, which seek to alter their position in the international system. The mutual support by these two states aim to help each other in their struggle against the existing status quo led by the U.S. in international politics.

All in all, a new era in international politics has begun. One of the primary features of this new era is that states with democratic populist regimes challenge the international status quo. Turkey and Venezuela share this political model: democracy at home, autonomy abroad. They support each other since they share similar interests and values. Hence, there is no need to be surprised about Turkey’s support for President Maduro or denigrate it as third-worldism.