Donald Trump’s recent call to block all Muslim Foreigners from entering the United States is a disturbing sign that Islamophobia remains an effective tool to gain support during an election campaign. 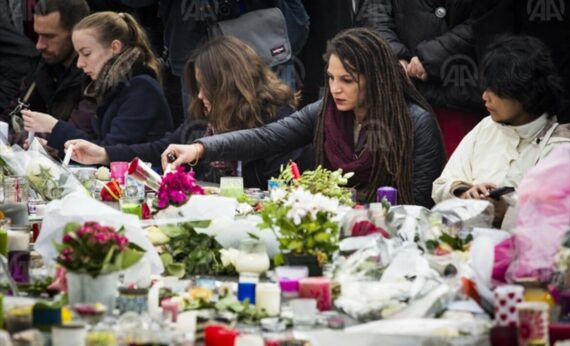 Following the coordinated terrorist attacks in which 130 people were killed in Paris on November 13th, many observers (including politicians) declared that France was going through its own “9/11”.  At first glance, there are indeed many striking similarities between the two terrorist attacks and the way they both traumatized the United States of America in 2001 and France in 2015.  Far more than localized attacks that could be socially and / or geopolitically explained, these tragedies has been unanimously described as a global “act of terror” against either “the American Way of Life” or the “French lifestyle”. In both cases, these “barbaric” and “foreign” attacks targeted peaceful civilians and the only possible response would be the declaration of a “global war on Terror” (Georges Bush) or a “merciless war” against the Islamic State (François Hollande).

As a direct consequence of these terrorist attacks on domestic soil, both George W. Bush and François Hollande benefited from the “rally-round-the-flag effect”: they openly became “War Presidents” and intensified their military intervention in the Middle East while reducing civil liberties at home.

On the international front, The United States of America heavily bombed Afghanistan that was harboring Al-Qaeda and invaded Irak in 2003 (without the authorization of the United Nations) whereas France immediately intensified its bombing of the so-called and self-proclaimed “Islamic State” (I.S.) in Syria. One should not forget that the ensuing chaos in Irak led to the creation of I.S…

On the domestic front, the U.S. government drafted the “Patriot Act”, which drastically limited American civil liberties and opened the door to the infamous Guantanamo prison. With the same parliamentary support, the French Government declared a new “state of Emergency” by extending a law created in 1955 during the bloody postcolonial war of independence in French Algeria.  It also proposed to write the State of Emergency into the French constitution.

However, beyond these apparent similarities between the American and the French immediate reactions to these international acts of terror (intensified military intervention in the Middle East and strict restriction of civil liberties), it is possible to highlight a few factors proving that history will not repeat itself and that “November 13th” can not become a French version of “9/11”.

On the international front, it is obvious that France, a newly (re)integrated NATO member, does not have the United States of America’s diplomatic and military capabilities.  As a truly Hobbesian State, America had the military power to invade Irak on its own even if they tried, mostly for diplomatic reasons, to build the largest “coalition of the willing”: At the end, out of the 48 Nations officially supporting the Bush administration in its “war against terror”, only three nations (The United Kingdom, Australia and Poland) offered limited military support on the Iraqi front. It is true that France is still one of the five permanent members of the United Nation Security Council and remains the largest army in continental Europe with a nuclear arsenal.  But as a more Kantian European State focused on peace building since the end of the Cold War, France has neither the diplomatic power nor the military might to follow the United States’ steps in the Middle East. As confirmed by President Hollande’s mixed results in his attempt to build a larger coalition with the support of key regional players such as the United States, Russia or even its closest European ally Germany, it is clear that France will not be able to unilaterally wage the “merciless war” against ISIS on Syrian soil as President Hollande and Prime Minister Valls promised to French citizens.  In addition, the current humanitarian tragedy in Syria where millions of civilians are brutally killed and forced into exile by both ISIS and the terror producing/exporting Assad Regime will force the French government to follow a more diplomatic path. The recent diplomatic agreement reached between the European Union and the Turkish government on the Syrian refugee crisis is a promising step in this more peaceful direction.

The future of civil peace and collective harmony in France depends on it.

If there is no doubt that “November 13th” cannot have on the international scene the same impact as “9/11”, there are serious reasons to worry about the consequences that a radicalized war against ISIS terror could have on the French domestic front.  Situated thousands miles away from the Middle East with a very small Muslim community, the United States of America can still afford to dangerously instrumentalize Islam(ism) for political gain without having to greatly suffer on the domestic front from such an anti-Muslim rhetoric. Donald Trump’s recent call to block all Muslim Foreigners from entering the United States is a disturbing sign that Islamophobia remains an effective tool to gain support during an election campaign.

However, the situation of France, the country hosting the largest Muslim community in Europe, is radically different. As opposed to what happened in 2001, the French situation is a lot more complex since – despite apparent links to Syria – it was clearly a matter of homegrown terrorism with European connections. Moreover, as proven by the 2005 suburban youth riots and by the 2015 attacks against the satirical magazine Charlie Hebdo and the kosher hypermarket, France is still struggling to harmoniously balance its multicultural and pluri-confessional identity inherited from its troubled colonial past with its deeply rooted Republican principals inscribed in the first two articles of the Constitution: “liberty”, “equality”, “fraternity” and “secularity” (“Laïcité”).  In a country where Marine Le Pen’s anti-immigrant and anti-Muslim National Front is becoming the main party shaping the whole political landscape, it is urgent that the French Republic rightfully preserves its integrity without however abandoning its core democratic values. It is also important that, in the name of national unity, France protects its Muslim community, which unanimously condemned the barbaric killings on November 13th. But there are reasons to worry:  In the wake of the Paris attacks, islamophobic hate crimes have skyrocketed not just in France but in the whole Western world.  In recent days, many French associations and non-governmental organizations have denounced the drastic reduction of civil liberties made possible by the new State of Emergency. For example, many climate activists have been abusively placed under house arrest during the COP 21 conference in Paris even if they did not represent a terrorist threat. Many search warrants and house arrests have also targeted innocent Muslim French citizens who, thankfully, have been finally released. There are thus serious reasons to fear that the security measures taken by the French government could put at risk the civil Rights at the heart of French society and more particularly the freedom of its Muslim community. As clearly summarized by former conservative Prime Minister Dominique de Villepin (who gained international fame by opposing the U.S. invasion of Iraq in his 2003 UN speech), it is the moral and political duty of France to resist “the temptation to slide towards authoritarianism”.

The Paris attacks will certainly go down as one of the most tragic and infamous day in recent French History.  The difficulty to develop a more (self)critical and complex understanding of  “November 13th” is a normal reaction that can be partially explained by the profoundly traumatic nature of these killings.  And yes, this is still the time to mourn and salute the memories of these 130 innocent victims. But if we want to make sure that History does not repeat itself and that “November 13th” does not have the same tragic consequences for world peace than “September 11th” and if France does not want to fall into the “civil war trap” designed by the so-called “Islamic State”, the time will come soon to move beyond grief in order to truly understand the complex social, cultural and (geo)political roots of what happened on November 13th.  The future of civil peace and collective harmony in France depends on it.

Philippe Barbé holds a PhD in literature from Northwestern University. He taught French professor at the University of California Irvine. He is currently teaching French language and literature at Marmara University. His main fields of interest are Francophone literature, postcolonial studies and Mediterranean studies.