Why the Northern Syrian Oil Fields Are So Important to Trump

Despite President Donald Trump repeatedly saying that US troops are staying in Syria in order to 'secure the oil', data indicates that Syria has no remarkable oil reserves. So why are the Northern Syrian oil fields so important to Trump? 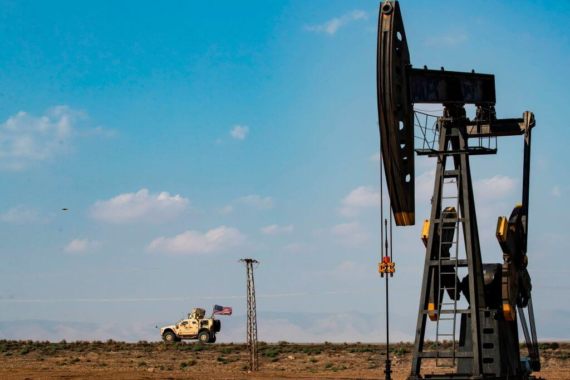 A US military vehicle, part of a convoy arriving from northern Iraq, drives past an oil pump jack in the countryside of Syria's northeastern city of Qamishli on October 26, 2019. Getty Images

Despite President Donald Trump repeatedly saying that US troops are staying in Syria in order to ‘secure the oil’, data indicates that Syria has no remarkable oil reserves. When considering the US’s position as the world’s richest oil-producing country, specialists say that Washington does not need Syrian oil at all.  So why are the Northern Syrian oil fields so important to Trump? A recent panel discussion at SETA, Istanbul provided some answers.

During Turkey’s Operation Peace Spring on the Northern Syria border, US President Donald Trump made a number of statements on his twitter account and at press conferences. There were several subjects he showed particular attention to during this period, and one of them was the oil fields in Northern Syria.

Despite agreeing to withdraw all troops from the region, a small contingent of US troops stayed behind. After a meeting between the Turkish government and a US delegation led by the US Vice President Mike Pence, Trump stated: “Early this morning, the government of Turkey informed my administration that they would be stopping combat and their offensive in Syria, and making the ceasefire permanent… We’ve secured the oil, and, therefore, a small number of U.S. troops will remain in the area where they have the oil. And we’re going to be protecting it, and we’ll be deciding what we’re going to do with it in the future”.

After his statements on Syrian oil responses were made by the President of the Syrian Arab Republic Bashar al-Assad, Turkish Foreign Minister Mevlut Cavusoglu and Russian Foreign Minister Sergey Lavrov.

Al-Assad made a striking statement about Trump on Syrian State Television saying. “I tell you he’s the best American president. Why? Not because his policies are good, but because he’s the most transparent president. All American presidents commit crimes and end up taking the Nobel Prize and appear as a defender of human rights and the ‘unique’ and ‘brilliant’ American or western principles. But all they are is a group of criminals who only represent the interests of the American lobbies of large corporations in weapons, oil and others” he said.

Turkish Foreign Minister Cavusoglu speaking from the 24th Economic Cooperation Organization (ECO) Council of Ministers Meeting in Turkey’s Mediterranean resort city of Antalya highlighted that the US or any other country does not have legitimate right to Syrian oil according to international law. He commented “the US admits that it is in Syria especially for the oil reservoirs. We are talking about a country that does not hide it is there to seize it for oil wealth, and we see that it also supports terrorist organizations such as YPG and PKK with the income obtained from the revenue” he stated.

Russian Foreign Minister Lavrov stated that the U.S’s attempts to control the Syrian oil fields are illegal. “Their attempt, deep down, to rob the Syrian Arab Republic and take control of the oil fields, it is illegal and does not bring anything good to the Syrian settlement, it only retains a serious irritant, a serious threat in this part of Syria” he highlighted.

In spite of the US government’s interest in the Syrian oil fields, the numbers simply do not add up. According to the U.S. Energy Information Administration’s 2018 data (EIA), Syria is ranked 75th in the world for the total production of petroleum and other liquids. EIA’s data also show that the US is the world’s richest country according to oil production rates. According to EIA the ten oil-rich countries are; United States, Saudi Arabia, Russia, Canada, China, Iraq, Iran, United Arab Emirates, Brazil, and Kuwait.

During a panel discussion organized by SETA Istanbul Office titled ‘Syrian Oil Source: The role of the US, Russia, and regional actors’, Syrian Interim Government Treasury Secretary Abdulhakim Almassri, a member of Syrian Interim Government, Fatih Shaban, and a specialist from the Center for Middle Eastern Studies (ORSAM) Oytun Orhan explained the situation on the ground.

According to Almassri, prior to the Syrian civil war, official records stated that there was 380,000 barrels of oil produced per day. On the other hand, unofficial records which are based on Almassri’s source, suggest that the more accurate figure is one million barrels. “The production of oil was just twenty per cent of Assad regime’s income. However, just seven per cent of this income used to be added the government budget. The rest of it was passed to personal accounts.” he said at the program.

Further to Almassri’s comments, a recent TRT World news broadcast ‘The War in Syria: Protests over oil in SDF controlled Deir Ezzor‘ highlighted the importance of oil on the ground. The report found that oil is the key to everyday life in the region. One of the traditional refinery owners interviewed on the program, Ali Jasem told TRT World that despite there being 1,500 traditional refineries, only one or two of them operate every day. “No one knows where the oil is taken. Despite the fact we are in oil-rich area, we bring the oil from Al Jafra, other oil fields. Men are working hard to earn just two dollars every day. Our condition is becoming difficult here. And we are also losing money” Jasem said. According to TRT’s other local sources, the oil fields were controlled by the SDF, and this terrorist organization only gave a limited amount of oil to locals.

Almassri also argued that the US transferred control over the oil fields to the SDF, led by the YPG terrorist organization, to keep them under the control of Washington and that manoeuvers by Russia were a motivation for the US’s actions in the region. “Washington works with the SDF. Russia took control of the coasts. So where is Iran in the region? Russia tries to move away Iran from the region. Particularly, the places that have natural gas” said Almassri, and added that Russia entered into a 25 years deal with the Syrian regime to search for gas on the Syrian Mediterranean shore. Almassri emphasized that the Mediterranean shore of Syria has great potential for natural gas sources.” If this natural gas is found in the next three years, Syria will be the 3rd richest country in the world on the natural resource table,” he said.

Like Almassri, Shaban argued that the actual motivation for occupying the oil fields were more strategic, with the US trying to strengthen its position in the region. “The US is trying to keep a balance between the sides, and the rise of Turkey in the area has disturbed the US administration. There is also the issue of protecting Israel, otherwise, Syrian oil does not have significant importance for the US” Shaban said.

Shaban further pointed out that after the deal between Russia and the Syrian, Moscow made striking movement in the area. “In fact, the US is not interested in Syrian oil at all. Russia’s existence in the region and the establishment of a base on the Mediterranean caused the US’s existence there. Because the shore Russia took control of has great potential for natural gas reserves. In the near future, Russia is going to have a Syrian energy source, and Moscow sees the Syrian civil war as an important step to becoming a superpower again” he added.

Oytun Orhan, a specialist from the Center for Middle Eastern Studies (ORSAM) also shared his perspective on the Northern Syria energy sources saying “Syria has limited energy sources. The important thing here is the geopolitical position of Syria. If we consider Syria’s location, whoever controls this country, they are going to have a great power over the region”.