Why the YPG Can’t Fight Against Turkey

The YPG doesn’t have the experience of the rebels in Idlib who have fought for years against an enemy with air-power. The YPG has become too used to air-support and their experience in war without air support is mainly limited to its loss of 200 villages in a week south of Ayn al-Arab (Kobane) in its fight against Daesh. 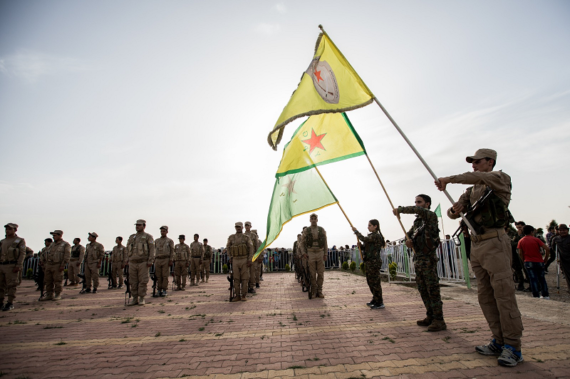 The body of the Spanish citizen Rull Linhoff is buried in Dayrik / Syria on the Matyr Khabat cemetery. Mr. Linhoff had fought with the YPG in Deir es-Zor and was killed there. Getty Images

The Turkish President Recep Tayyip Erdogan announced that Turkey had informed the US and Russia about a planned military operation against the YPG (also known as the People’s Protection Units). An important question in this regard is: Can the YPG fight and resist against a joint Turkish-Syrian military operation? To put the answer with the words of Aldar Xelil, a leading Kurdish figure, “If they [Turkey] enter, our territory will be destroyed,” stating that they have no illusion of a victory against Turkey. However, the answer to the question of why the YPG has no chance against a joint Turkish-Syrian military operation also answers how the US has miscalculated its position in negotiations with Turkey for long.

First of all, the terrain along the Syrian-Turkish border east of the Euphrates is clearly favorable for a joint Turkish-Syrian military operation and a huge disadvantage for the YPG who lack fire power superiority, air superiority and technology. The Turkish Armed Forces as the second biggest army in the NATO alliance has an asymmetric superiority against the YPG in all military terms, and the Syrian National Army as Turkey’s partner forces is the equal counterpart to the YPG. While Turkey will change the balance of power immensely, the Syrian National Army will diminish the advantages of a non-state armed actor in a war environment against a conventional army. Briefly, when the most effective non-state armed actor Daesh lost the same terrain against the YPG who enjoyed US air support, the YPG has no chance against a joint operation by Syrian National Army and the Turkish Armed Forces.

A second reason for the YPG to lose will be its untrustworthy alliance formed with the Syrian Democratic Forces (SDF) and its limited number of voluntary fighters. The SDF was formed to combat Daesh, not Turkey and not the Syrian opposition. When Turkey enters the region, the YPG will find itself surrounded by “betrayers” who will refuse to put up a fight which is not theirs as the alliance’ commitment to the SDF components are low. Also many non-YPG elements of the SDF have sympathies either with the Syrian opposition or with Turkey and, in addition to this, many US-trained recruits may desert to the winning side. The pragmatic nature of the alliance won’t prove itself reliable in case of a hopeless war. Additionally, the border stretch from which Turkey will launch its operation is just too long for the YPG to patrol, and the YPG has been too reliant on forced recruitment that are not the most stable force. Holes in the frontline are unavoidable for the YPG. On the other side, the Syrian National Army comprises of voluntary fighters alone.

The last reason is that US support has made the YPG vulnerable. The YPG controls cities and towns with administrative buildings, military bases and permanent stations. The group also acquired vehicles and other supplies from the US. All of these reduce the mobility of the YPG, make them a static force and therefore turn them into easy targets for the Turkish Armed Forces. Over the years of incessant US support, the YPG has been fighting under air backing which will prove devastating if they were to change sides and be attacked by airstrikes. The YPG doesn’t have the experience of the rebels in Idlib who have fought for years against an enemy with air-power. The YPG has become too used to air-support and their experience in war without air support is mainly limited to its loss of 200 villages in a week south of Ayn al-Arab (Kobane) in its fight against Daesh.