Whether the Trump administration continues its policies of dragging Iran into economic bankruptcy or whether the tension between the two countries turns into a military encounter, it will undoubtedly become of the most important points on the agenda concerning all of the Middle East region. 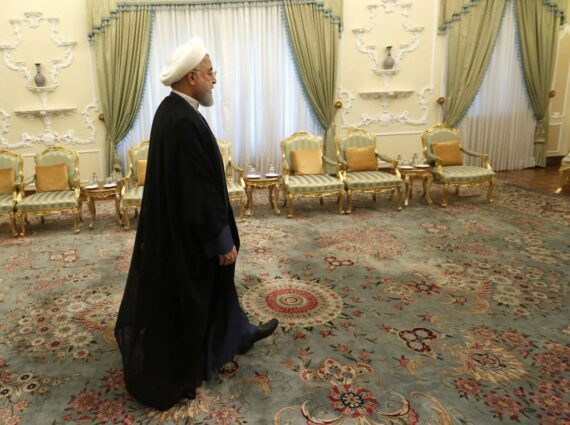 Iranian President Hassan Rouhani arrives to a meeting with the North Korean foreign minister in the capital Tehran on August 8, 2018. Getty Images

With U.S. President Donald Trump’s unilateral withdrawal from the nuclear deal signed between Iran and the P5+1 countries in May 2018, Iran’s nuclear activities have moved to the top of the international agenda again. While the two-stage sanctions imposed by the United States began to be implemented in November and targeted the country’s economic infrastructure, some countries were granted a six-month exemption, especially on oil sales. The six-month exemption granted to Iran’s major oil importers such as China, India and Turkey ended in May this year. Negotiations between the countries that were granted exemptions and the U.S. did not reach any conclusion. Thus, these countries subsequently made statements that they had stopped purchasing oil from Iran.

Trump’s unilateral withdrawal from the multilateral agreement, which had a tremendous impact in the international community and had been approved by the UN Security Council, was met with great reactions by many countries. In the statements made after Trump’s withdrawal, EU countries in particular emphasized the importance of the agreement and indicated that they were behind it. However, pressure exerted on different actors by the U.S. in the past year has yielded desirable results for the Trump administration. For instance, the INSTEX mechanism, which was expected to allow European countries to eliminate Iran’s commercial concerns and allow for money transfer without encountering U.S. sanctions, was born dead after one year of effort. On the other hand, in the one year period that passed, almost all large European companies withdrew from Iran and there was a 80% decrease in the trade volume between the continent and Iran. Therefore, even if the aforementioned mechanism had worked, it would not have been functioning effectively since there were not many companies pursuing business with Iran.

In one year, almost all large European companies withdrew from Iran and there was a 80% decrease in the trade volume between the continent and Iran.

Just like other countries with close political and economic relations with Iran, Turkey stated that the U.S.’ unilateral withdrawal from the Nuclear Deal was not right and that sanctions imposed on Iran were unacceptable. In this respect, it can be indicated that Turkey’s Iran policies in the last year have been overlapping with Ankara’s policies with other important actors such as the EU, Russia and China. This can be summarized as giving theoretical support to Iran but not taking steps against the Trump administration in sanction areas such as oil export or money transfer, which the U.S. is sensitive against. For this reason, Iranian Deputy Foreign Minister Abbas Araghchi, who failed to find the support he expected during his visit to Europe, stated that Tehran expected concrete steps to be taken rather than political support during his visit to Turkey. An important factor that should not be disregarded in Turkey’s cease of oil purchases from Iran is that the country’s biggest client, Tüpraş, is a private company and makes decisions in line with its own strategy rather than the government’s political stance – just like many other European and even Russian companies.

However, there are also other factors to take into account in order to understand Turkey’s frustration on the Iran sanctions. Bilateral relations between Turkey and the U.S. hit bottom low with the failed July 15, 2016, coup attempt, which was implicitly supported by the Obama administration. Relations between the two countries have not yet reached the desired level despite the remedial steps taken. Trump’s own demands such as withdrawing from Syria and minimizing relations with the YPG were stuck in the security bureaucracy around him. These bureaucrats are known to hold negative views on Turkey.

Turkey has many problematic policy areas with the U.S. and the country did not want the issue of Iran sanctions to be added to these.

Crises such as the Halkbank case and the S-400/F35 issue, which have been ongoing since the Obama period, have been the main obstacles in transforming Ankara’s principal attitude towards Iran into practice. To be clearer, Turkey, which has many problematic policy areas with the U.S., did not want the issue of Iran sanctions to be added to these. Considering the disputes on military equipment purchases and the Israeli plan of expansion, also known as “Deal of the Century” will increase current tensions between the U.S. and Turkey, the Turkish government’s pursuit of a flexible policy on the issue of Iran is a very understandable attitude.

The peak in tension between the U.S. and Iran

Hassan Rouhani’s statement in May where he announced Iran’s counter-measures and stated that they would resume sensitive nuclear activities, particularly uranium enrichment, two months later if the economic expectations of Iran were not met, increased tension in relations between the two countries. However, the real alarming development was the attacks on the important oil facilities and tankers in Saudi Arabia and the UAE, in a way that reminded of the threats made by Iranian officials on the lines of “If we cannot sell oil from the Gulf, nobody can.” These attacks on the most important supporters of Trump’s anti-Iran policies and the simultaneous mortar attacks near the U.S. embassy in the secure Green Zone in Baghdad showed that the political tension could turn into a military conflict.

As a result of the regional visits made by U.S. officials, sending additional troops to the region and mediation attempts made by Iraqi officials, the tension has been settled to a great extent. More, criticisms made against National Security Advisor John Bolton, who is known as the architect of the hawkish anti-Iran policies, before the cameras, eased tension for now. Yet, there is still curiosity regarding whether Japanese Prime Minister Shinzo Abe’s visit to Tehran (who had been visited by Trump recently), will lead to a conciliation. If a positive result does not find ground from the prospective visit, and if Iran resumes nuclear activities in July, tension may escalate again.

In fact, the main problem in bilateral relations was the gap between the expectations of the parties rather than the lack of mediation attempts. After Trump left the deal, Secretary of State Mike Pompeo’s setting out of the “conditions for normalization,” which targeted Iran’s regional and defense policies, tools and non-state allies, the designation of the Revolutionary Guard Corps – Iran’s most important security agency – as a foreign terrorist organization, and sanctions imposed on several state officials were effective in terms of Iranians reaching to a consensus about who the real target was. As a matter of fact, even President Rouhani, who is known as a moderate in Iran and who has made his willingness to negotiate with the U.S. explicit on various occasions albeit indirectly within the last process, has emphasized in his statements that the ultimate goal of the Trump administration has been a regime change in Iran.

The political tension between Iran and the U.S. can turn into a military conflict.

Accordingly, statements made by Trump, such as, “We just don’t want them to have nuclear weapons; it’s not too much to ask” or “Iran has a chance to be a great country with the same leadership” did not have much reflection in Iran. On the other hand, if Trump is serious in his statements, Iranian officials demand practical steps to be taken – such as extending exemptions in oil sales, the U.S. to return to the nuclear deal, or Bolton’s dismissal from office. In the absence of such a concrete step, it can be predicted that Iranians will maintain the risky strategy that they call “maximum resistance.”

In case the differences of expectation between the parties cannot be overcome in a short time by the influence of mediators, it can be predicted that the tension will escalate quickly. One of the main steps that Iran will take before an economic destruction like Venezuela is to put pressure on the U.S. by rapidly resuming its nuclear activities and secondly, by increasing its retaliatory attacks against the U.S. or, more likely, against its regional partners, in order to show that it does not refrain from the escalation of regional tensions. In this respect, the months ahead will be decisive. Yet, according to the commonly accepted view that is shared by many analysts, the Iranian economy is in a state that cannot resist in the face of zero oil exports. The financial crisis has already begun to influence the fighting capacity of its regional proxies. As a matter of fact, according to some Iranian commentators, Trump’s statement, “I don’t want war,” or his attitude of ignoring the sabotages in the Gulf is a tactical approach that aims to save time and prevent a military loss by making Iran kneel down on its knees.

Turkey maintains its stance that prioritizes Iran’s political and economic stability and keeps its distance from the regional polarization against Iran. Ankara has argued that the problems between Iran and the United States should be resolved through diplomatic negotiations and that heavy economic sanctions will not only affect the people of the country, but will also have an effect on regional peace and stability. As a matter of fact, suffering from great economic loss in the energy, tourism and export sectors, there has been an increase in the wave of migrants coming to Turkey from Afghanistan and Iran.

Turkey maintains its stance that prioritizes Iran’s political and economic stability and keeps its distance from the regional polarization against Iran.

Turkey, which has experienced how the Iraq and Syria crisis opened space for the PKK terrorist organization, continues dialogue with all parties in order to prevent the Iran crisis from reaching a similar stage. It is therefore trying to closely watch the mobility in the field. The statement made by the Iranian branch of the PKK, PJAK, “We are ready to fight with Iran,” and the attack on the IRGC forces where one Iranian soldier was killed in the Chaldoran region and on the zero-point of the border, shows that the organization has an intention to maintain its legionary status regarding Iran. Due to this, it wants to turn itself into a more important position and permanent partner in the eyes of the U.S. and its regional allies. The organization has started to disrupt balance in U.S.-Iran relations, which until now, has been to the detriment of Iran. This is clearly an act of positioning.

Whether the Trump administration continues its policies of dragging Iran into economic bankruptcy or whether the tension between the two countries turns into a military encounter, it will undoubtedly become of the most important points on the agenda concerning all of the Middle East region. It is fair to state that this issue will also remain as a high priority foreign policy concern for Turkey.