No doubt, Operation Peace Spring will take its place in the history books as a military operation through which Turkey's future was saved by today’s leadership. 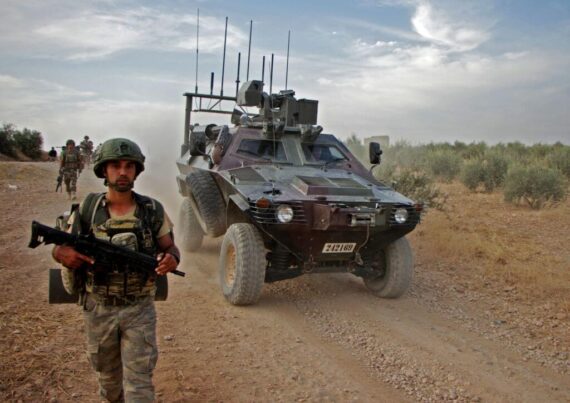 Turkish troops walk alongside an armoured personnel carrier through the town of Tukhar, north of Syria's northern city of Manbij, on October 14, 2019. (Photograph: Aref Tammawi/AFP via Getty Images)

On October 9, Turkey launched Operation Peace Spring for which it had been preparing for months. Understanding that diplomatic efforts with regional and international actors could not prevent the establishment of a planned corridor by the YPG terror group in northern Syria, Ankara decided to take a unilateral step towards eliminating the threats against its territorial integrity and national interests. Acting within the framework of international rights and obligations and with the legitimacy of international law, Turkey emphasizes that the primary objective of Operation Peace Spring is to prevent a terrorist controlled corridor along its southern border.

In fact, within the scope of this, Turkey’s multi-staged plan began to be  implemented three years ago, on August 24, 2016, through Operation Euphrates Shield. Organized with the wide participation of the Turkish Armed Forces’ air and ground troops, Operation Euphrates Shield played a critical role in minimizing some of the negative consequences of the Syrian Civil War. The Operation made significant progress in blocking the PYD, the Syrian branch of the PKK, and the YPG, the military wing of PYD, from establishing a “terror corridor” in the region. The push back against this organization that is supported by the United States, Turkey’s now unreliable ally, through all kinds of weapons and ammunition, was crucial for Ankara. Turkey believed that YPG constituted a permanent threat along its southern borders. Therefore, eliminating the terror group was of vital significance not only for the national security of Turkey, but also for the long-term interests of the Middle East and the Eastern Mediterranean. Operation Euphrates Shield may be seen as a  milestone in the history of modern Turkey.

The second operation was carried out between  January and March 2018 under the name Operation Olive Branch that was the next step in the process. Through this operation, an important area in the West of the Euphrates, including the city of Afrin, came under the Turkish control and the groups supported by Ankara. The city of Afrin was a strategic location for the YPG and regarded as one of its strongholds in the region. With these two operations, Turkey proved its determination to eliminate all kinds of threats directed to its national security.

In the last stage of this initiative, Turkey launched Operation Peace Spring. It was announced that the Turkish Armed Forces have initially aimed to control the area between the towns of Tal Abyad and Ras al-Ayn. In the later stages, the operation aims to create a safe zone, which will be 480 km long and 30 km deep on the other side of Turkey’s border with Syria. With Operation Peace Spring, Ankara aims to free a total of 13,500 square kilometers from terrorist elements and to achieve four goals to ensure its national security.

The first and primary objective of Operation Peace Spring is to prevent the establishment of a terror corridor in Northern Syria. Turkey aims to not only make terrorist elements leave the area but to also create a peaceful safe zone along its southern border where the Arab, Turkmen and Kurdish civilian population of the region can live in peace. For this, the liberation of the cities under the YPG control was vital.

Turkey’s second goal is to send a message to the international community and regional actors that Ankara is determined to use hard power when needed. Through Operation Peace Spring, Turkey once again shows its determination in the face of any anti-Turkey policies by global and regional actors, and that it will not hesitate to resort to military options if its national interests are threatened. While Turkey considered both diplomatic and military options in finding solutions to regional problems, it also demonstrated itself to be a decisive power in responding to initiatives which may attempt to undermine Turkey’s rights in other conflict zones such as the Eastern Mediterranean.

Another important objective of Operation Peace Spring is to create a safe zone for the return of the Syrians. As President Recep Tayyip Erdogan stated, Syrian refugees who want to return to their country will be able to return to the cities that will be liberated and built after Operation Peace Spring. This step will be in line with the demands of various social groups inside Turkey that have criticized the government for its handling of Syrian refugees. It is understandable that Ankara aims to prevent further polarization over Syrian refugees.

Turkey has recognized that there may be a greater threat to its own interests in the future if such an ethno-nationalist Kurdish state is established, and has taken a decisive stance to eliminate this terror corridor despite international pressure. Due to this determination, Turkey could turn a deaf ear to regional and global actors. In spite of the serious reactions and threats by the US administration, President Recep Tayyip Erdogan stressed that Operation Peace Spring will continue until it reaches its goals.

Several international organizations such as the European Union and the Arab League raised concerns about the operation but Turkey’s response to these statements were harsh. In one of his speeches, President Erdogan gave a strong response to the condemning messages by countries such as Saudi Arabia and Egypt. Reminding listeners that Saudi Arabia was responsible for thousands of civilian deaths in Yemen, he stressed that Riyadh had no right to criticize Turkey’s operation against terrorist organizations. He also mentioned that Sisi, who came to power with a military coup in Egypt, was a “democracy killer” and that Cairo would not be successful in its smear campaign against Turkey.

It should be reiterated that most of the governments in the Arab world are regimes that do not derive their legitimacy from the people, and do not reflect the views and will of their public. The foreign policies of these regimes do not go beyond the desires of their Western allies. These regimes are taking a position against Turkey’s Operation Peace Spring as they think Turkey’s actions could threaten their own interests or their Western allies. Therefore, it would be misleading to think that the statements made by these countries have also been endorsed by the Arab masses. In contrast, the Arab people support the leadership of Turkey led by President Erdogan in the Middle East as public opinion polls show that he is the most respected and trusted leader in the region.

With Operation Peace Spring, Turkey has taken a vital step towards ensuring peace and stability in the region. Despite facing all kinds of threats and pressure, Ankara has shown the international community that it will never allow a terrorist organization on its borders. With its military capacity, technical equipment and operational capability developed in recent years, the Turkish Armed Forces are one of the most important actors that have contributed to launching Operation Peace Spring. The operation is also endorsed and supported by almost all political parties represented in the Turkish Grand National Assembly. Only the HDP, which has close links to the PKK/YPG terror group, did not support the operation. No doubt, Operation Peace Spring will take its place in the history books as a military operation through which Turkey’s future was saved by today’s leadership.