Turkey confronts a major threat stemming from both its neighbors and allies. Although the country initially tried to close this gap with the air defense batteries it requested from NATO, experiences showed that this method has not efficiently worked. 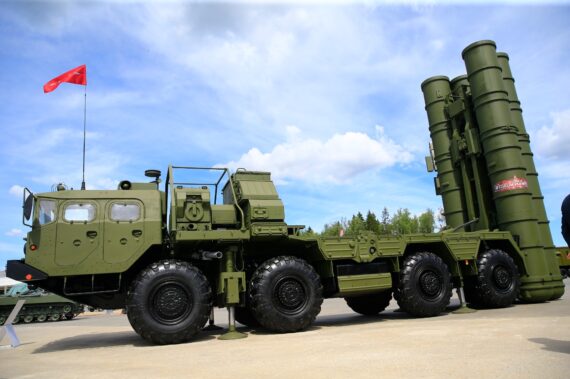 During the Cold War period and the decade following its ending, Turkey experienced a phase in which its defense policies were integrated to the policies developed by NATO, while terrorism was fought in line with the military’s foresight inside the country.

Regarding decision-making mechanisms and politics, dominated by the military and the bureaucratic elite at the time, solely as structures to obtain funds remained under the veil of the sacredness attributed to the subjects related to defense.

In the present situation, it has become a requisite for the Justice and Development Party (AK Party), which has successfully remained as a ruling power by overcoming all kinds of tutelage mechanisms since the early 2000s, to confront this problem. Particularly in the aftermath of the July 15 coup attempt, the politically and institutionally autonomous spaces developed within the security mechanisms of the country by the Gülenist Terror Group (FETÖ) and the Turkish Armed Forces (TAF) as from the 1960 coup attempt became visible and showed the necessity of holding the TSK under a democratic monitoring.

The need for air defense systems

Although countries’ needs for air defense systems have been evident since the Germans used the V2 missiles that could hit targets within 250 kilometers of distance during World War II, an air defense system that offers solutions with an integrative perspective has never been established in Turkey, where NATO’s defense policies were complied with until the 1990s. Even though low altitude air defense systems and radar systems were set up in order to protect some critical facilities and cities during the Cold War period, it is obvious that these systems are unable to avert threats today. This becomes even sharper as the air defense systems owned by Turkey and the threats surrounding the country are contrasted.

Turkey has many different air radar site commands and radar systems deployed in critical zones for the monitor and control of its air space. Within these systems, four E737 airborne early warning and control aircrafts comprise a significant monitoring and warning mechanism as they can control more than 3 thousand targets within the range of 350 kilometers and the altitude of 12.200 meters. However, these radar systems do not have the ability to trace enemy air components from beyond 600 kilometers unlike S-400 radars. Also, a defense system that is integrated to these radar systems and that can eliminate enemy air components (aircraft and missile systems) in medium or high altitude is unfortunately not present in the TAF inventory.

The air defense systems registered in the TAF inventory, which are considerably less advanced and more effective against low altitude components rather than ballistic missile threats, are listed below:

The threats and S-400 systems

As can be seen, the air defense systems owned by Turkey are designed for low altitude and remain much less developed considering the current ones. Turkey confronts a major threat stemming from both its neighbors and allies. Although Turkey initially tried to close this gap with the air defense batteries it requested from NATO, the experiences revealed that this method is not always effective.

During the 1991 Gulf War, it turned out that Turkey did not have the means to protect itself from Iraq’s Scud missile systems, which had limited media coverage at the time.

During the 1991 Gulf War, it turned out that Turkey did not have the means to protect itself from Iraq’s Scud missile systems, which had media coverage at the time, albeit to a limited extent. However, the issue was forgotten until the Second Gulf War due to Ankara’s focus on the fight against terrorism.

During the Second Gulf War, the issue was remembered again due to the possible missile attacks on Turkish territory that could stem from the possibility that Turkey might lend its bases to the U.S. When the necessity to urgently meet this deficit was brought to NATO’s agenda, Germany, France and Belgium strictly opposed this support, which inevitably added a political character in the debates on Turkey’s air defense system. It can be remembered that then U.S. Secretary of Defense, Donald Rumsfeld, issued an array of statements to NATO and European capitals and endeavored to convince these countries.

Between the Second Gulf War (2003) and the outbreak of the Syrian Civil War, the Turkish government ran a busy schedule to meet the deficit in the national air defense system. When the purchase of Patriot missile systems from the U.S. was hindered by the U.S. Congress, Turkey announced in 2008 that it would go out to tender to close the gap in its air defense system and made a call to the companies that could possibly join the tender by releasing a request for proposals in 2010. Although Chinese, Russian, American, French and Italian firms placed bids, Turkey announced to public that the best offer was made by the Chinese firm as a result of the tally conducted on the basis of certain criteria such as technology transfer, costs, delivery time etc. Following this announcement, Turkey confronted serious pressure about purchasing an air defense system from China, and the tender, whose winner was not officially announced, was postponed with a political decision due to all the pressure.

Following the atrocious coup attempt Turkey went through on July 15, 2016, the West displayed a hypocritical approach and covertly sided with the coup organizers, which showed the Turkish government the diversity of the military threat sources it confronts. Turkey, which sought to urgently close the gap in its air defense system after that, made an agreement with Russia for the procurement and financing of the S-400 air defense system since Russia made the optimum commitment on the subject whereas NATO allies, particularly the U.S., refused to agree with Turkey on many aspects such as the delivery date, technology transfer and overall cost.

Russia made the optimum commitment on the air defense system issue whereas NATO allies, particularly the U.S., refused to agree with Turkey on many aspects such as the delivery date, technology transfer and cost.

Currently, Turkey is confronted by several fait accompli policies since the country’s influence area is tried to be limited to İskenderun and Antalya Gulfs and it is attempted to revoke the rights of the Turkish Republic of Northern Cyprus (TRNC) and Turkish Cypriots. Besides, both the EU and U.S. Congress are openly threatening the country on this matter.

Meanwhile, despite being Turkey’s ally, the U.S. continues to provide all kinds of weaponry and equipment to the terror groups in our region and openly supports the terror corridor that will besiege Turkey. In addition to all these threats, the threat of medium- and long-range missiles based in Iran, Israel, Armenia and Syria is growing each day. Considering the possibility that the West might also intervene in a conflict that might emerge due to the Eastern Mediterranean issue, it becomes more obvious that Turkey needs to make up the deficiencies in its national air defense as soon as possible.

The most urgent and essential strategic step in Turkey’s defense policy is to establish an effective high altitude air defense system in the Anatolia region.

Undoubtedly, the procurement of S-400 air defense systems is not sufficient for an air defense mechanism that requires a multi-layered system, which is surely within the knowledge of the political will that develops defense policies. Those who argue that purchasing S-400s are unnecessary for Turkey and that the country should not turn to groups other than NATO use the fact that the S-400 is not sufficient for air defense on its own as an excuse. They seemingly wish to see the continuity of the volatilities in Turkey’s defense system.

Leaving the country’s air defense to the mercy of NATO is another matter of debate that requires a thorough analysis. But in light of the developments, the most urgent and essential strategic step in Turkey’s defense policy is to establish an effective high altitude air defense system in the Anatolia region. After this step, Turkey will undoubtedly establish a multi-layered defense mechanism that will be able to rule out missiles and other air threats with medium and low altitude air defense systems in short and medium terms.

Since it is the government’s responsibility to defend the country against all kinds of attacks according to the Constitution, the political powers should lend an ear to the voice of those who can fight for their country and should pay attention to their constitutional responsibilities instead of listening to those serving the West.