The new judicial reform package in Turkey provides solid solutions to the deeply-rooted structural problems in the judiciary. Nonetheless, it is also crucial in providing a monitoring mechanism in the implementation stage of the package. 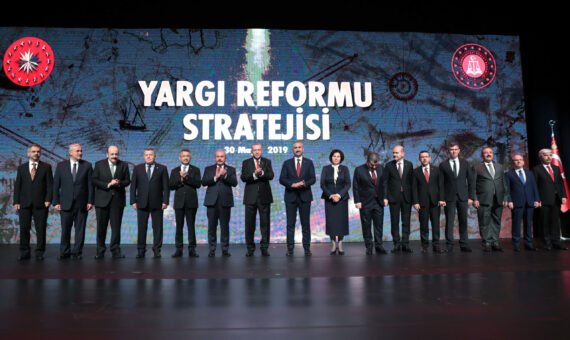 Last week President Erdogan announced the new judicial reform package on which there had been long-last discussions for a while. Since it was a hot topic of discussion not only in judiciary circles but also in politics, the document was prepared with the contribution of various groups in society, including journalists, scholars, NGOs, politicians, and members of the judiciary.

Indeed, Turkey’s judicial branch has been strengthened via comprehensive reforms in the last couple of years. The first full-fledged reform was announced in 2009 in order to improve judicial independence and accountability and to provide more public confidence in the judiciary. Nevertheless, even if some of the targets in the report were accomplished, it was seen that there was a need of another detailed study on the effectiveness and efficiency of the judicial branch in Turkey.

Turkey’s new judicial reform document was prepared with the contribution of journalists, scholars, NGOs, politicians, and members of the judiciary.

Due to this requirement, the second judicial reform package was announced in 2015. This package was crucial to see the reflections of the transformation of the traditional approach to justice. Beyond adopting traditional dispute resolution approaches, this package paid importance to alternative dispute resolution mechanisms such as mediation and facilitation. In accordance with recent trends in judicial branches throughout the world, providing distributive justice rather than binary win-loss situations has become one of the targets of Turkey’s judicial system.

The recent package should be evaluated within the same framework. It intends to provide a more independent, objective and accountable judicial system by accelerating the adjudication process via more effective mechanisms. The package also aims to improve the protection of rights and freedoms, provide a more objective and transparent judicial process, develop human resources, and facilitate access to justice.

At this point, it is crucial to ask why Turkey still needs comprehensive judicial reform. Almost three years ago, the Gulenist Terror Organization (FETO) organized a military coup, which failed thanks to the resistance of people that took to the streets. After a detailed investigation, it was seen that this organization had also infiltrated into Turkey’s judicial branch. Thus, there has been a major investigation in the judicial branch in order to get rid of the FETO-affiliated members.

Since FETO-affiliated judges and prosecutors have been dismissed from the judiciary, the system witnessed some problems in efficiency. The adjudication process became longer and the human capacity of the judicial branch became inefficient. Due to this reason, Turkey’s Ministry of Justice called for a new judicial reform package and underlined the necessity of the participation of all groups in the preparation of the package.

The new judicial reform package in Turkey provides solid solutions to the deeply-rooted structural problems in the judiciary. Nonetheless, it is also crucial in providing a monitoring mechanism in the implementation stage of the package. A monitoring package that observes the gaps in this stage may contribute to the implementation of resolutions and provide feedback to the staff. This mechanism is also important to map resilient sides of Turkey’s judicial branch. This map will be useful in providing more effective long-term solutions in the future.

Also Read
To Whom It May Concern: Turkey’s Counter-Spy Operations Send Messages
We use cookies to optimize your online user experience. To learn about our use of cookies and how you can manage your cookie settings, please see our Privacy Policy. By continuing to use our site you are excepting our use of cookies.Accept Cookies & CloseMore Info