Will Catalonia Create a Domino Effect in Europe?

The Catalonia referendum has the potential to encourage demands of autonomy and independence along with shaking the foundations of more powerful unitary European powers, especially when there is an economic or political crisis. 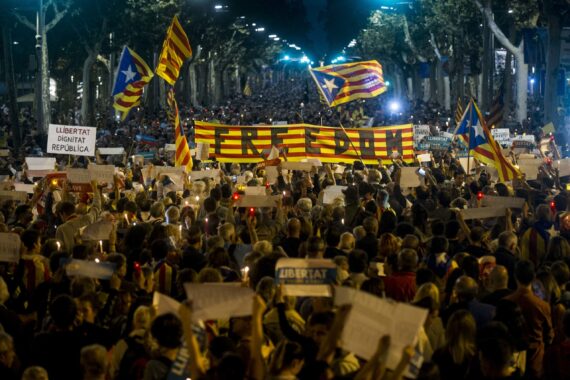 People hold banners translating "Freedom" and "Help Catalonia" during a candle-lit demonstration in Barcelona against the arrest of two Catalan leaders in Barcelona, Spain on October 17, 2017. Anadolu Agency

The first indication which reflected the severity of Catalonia’s independence for Spain and Europe was when the King of Spain appeared on TV after 40 years, warning the Catalan separatists. Unless the situation is of critical significance for the country, under normal conditions the King is expected to remain nonpartisan and neutral. However, the Catalan separatist movement could be accepted as extraordinary as this incident not only held the possibility of dividing Spain but also affecting EU member countries, such as France, the UK, Belgium and Italy.

Even though the declaration of independence has been suspended for the meanwhile, this potential is still retained. Thus, both the EU’s and its member countries’ silence and evasive approach towards the Catalonia referendum along with the harsh response of Spain were meaningful. While the EU warned Spanish security forces not to use excessive physical force, the Union deemed the referendum “illegal according to the Spanish Constitution” and stated that only maintaining a state of law might require occasional excessive usage of force. Many European capitals – with the exception of Belgium and Slovenia – decided to remain silent or act in support of the Spanish government.

A statement made by the Bertelsmann Foundation Brussels Chief Stefani Weiss during an interview gives an insight to how the EU functions, how prepared the EU is against such separatist incidents and the reasons as to why the EU remained unresponsive to the violence exerted on Catalan protestors: “The EU in a way is a good weather institution – as long as everything goes well, it works well. As soon as problems arise, the EU has huge difficulties in positioning itself and taking action.”

The EU in a way is a good weather institution – as long as everything goes well, it works well.

However, to explain this silence as mere disinterest would be too optimistic, as the EU is well-known for its rapid responses to events that occur even in the most remote locations of the Middle East. Departing from this optimistic approach, it can be argued that there are other reasons as to why both the EU, which consists of countries that have maintained their national unity and unitary structure, and member countries that are domestically bulged into a disputed territories row, have disregarded and remained silent on separatist movements. Even the least centralist EU member states are concerned that Catalonia’s independence bid could trigger other separatist movements and render the EU unmanageable.

More precisely, EU member states are concerned that the Catalonia separatist movement will trigger a domino effect, which will feed similar ideologies within their own territories. The EU’s attitude and true reason for standing beside Spain despite the use of coercive force could be summarized by the phrase, “let sleeping dogs lie.” Statements made by the European Parliament’s Spanish Deputy Esteban González Pons against the referendum exposes this concern pretty well: “If today you let Spain break up Catalonia, a domino effect will follow across the continent. Instead of a Europe of 27 we will have a non-Europe of mini-states.”

EU member states are concerned that the Catalonia separatist movement will trigger a domino effect.

The failure of the EU to act as a mediating party in the Catalan crisis, which could have been the most logical method in approaching the issue, was not just about the organization respecting its member states constitutional order, or not having procedures regarding a member country’s division. Rather, the EU is concerned about legitimizing these separatist movements that advocate independence. As is the case, almost all European countries have similar separatist groups to those in Catalonia, which are in a position to declare a potential independence. In this respect, the Catalonia referendum has the potential to encourage demands of autonomy and independence along with shaking the foundations of more powerful unitary European powers, especially when there is an economic or political crisis.

Basque region and concerns about ETA

Spain is one of those powers. While being able to negate separatist attempts of Catalonia, the richest region in the country, through legal means, Spain’s second concern is the Basque region. ETA, formed during the fight against the Franco regime in 1959 and advocating the independence of the Spanish-French Basque region, is one of the main concerns for Spain. Known for its violent actions, the organization disarmed itself in 2011. However, this does not mean that the ETA has forsaken its demands for the Basque region’s autonomy or independence. In other words, Basque separatists are banking their demands on Catalonia’s independence. For this reason, it is necessary to evaluate the Basque Lehendakari’s call to Madrid, urging the administration to recognize both Catalan and Basque nations, in this context. Discussing a similar resolution while Catalonia held a symbolic referendum in 2015, the call being made by Basque separatists two years later, has exacerbated Spain’s concerns over Catalonia’s independence movement. Granting Catalonia independence means losing the Basque region as well.

Another country concerned about the domino effect of the Catalonia referendum is Spain’s neighbor, France. While the French administration is concerned about Basques within the country taking Catalans as an example, France’s real concern is Corsica. Even though the National Liberation Front of Corsica (FLNC), which has progressed Corsican nationalism to a certain point with terrorist attacks towards French officials disarmed itself in 2014, this didn’t relieve the French government.

In fact, it is possible to claim that the Corsican national movement has evolved into something different, especially considering that their separatist candidates won the local elections in 2015 and dominated three out of four districts in the last election. For FLNC, which has been calling for the election of a Corsican nationalist majority in elections that are to take place in late November, the priority is to secure autonomy rather than independence. If the negative effects of the Catalonia referendum were not present, this demand would have pleased France.

There are minor separatist groups in the Alsace and Bretagne regions as concerns for France.

Scottish independence in the UK

In the case of a declaration of independence in Europe, the UK will, without a doubt, be the candidate most likely to be affected by the domino effect. A part of the UK since 1707, Scotland’s independence has been on the agenda for many years. Being an independent kingdom in the past, Scotland elected its first pro-independence government in 2007. With the Scottish National Party’s (SNP) landslide victory in 2011, there was an expectation of an independence which was materialized with the 2014 referendum.

However, as was the case in the 1979 and 1997 referendums, the “no” votes once again held the majority in this referendum. While the 55% “no” votes allowed breathing space for London, the Scottish have other options. In fact, the SNP recently announced that they are intending to prepare another referendum, which indicates that the option of independence will be offered to the Scottish people earlier than expected. Considering that a majority of Scots are proponents of the EU and opponents of Brexit, it is uncertain for how long Scotland will remain a part of the UK.

Considering that a majority of Scots are proponents of the EU and opponents of Brexit, it is uncertain for how long Scotland will remain a part of the UK.

Nevertheless, there are other European countries that can be added to this list of movements in pursuit of autonomy, separation, or independence, which can also be triggered by the referendum in Catalonia. It is possible to include the Flanders region which want to separate from Walloons, the Faroe Islands which have been dreaming of separating from Denmark and will have their own independence referendum in 2018, Wales with the lead of nationalist political party Plaid Cymru, and the Northern League which advocates the separation of affluent northern provinces of Italy from the poor southern provinces – despite not having any ethnic, religious, cultural or linguistic differences – as other examples. The Şicula region in Romania, which has a high Hungarian population and Vojvodina in Serbia could also be included to this list. All of these regions have the potential to separate, declare autonomy or independence and therefore constitute a reasonable excuse for centralist states of Europe to be concerned about the developments in Catalonia.

Birol Bicer graduated from Galatasaray High School and obtained a background in law. While having worked for many magazines across Turkey, he is currently an editor for Forbes Turkey magazine.