Will İmamoğlu, a high-profile CHP politician now, perform Friday prayer with congregation on Fridays? If so, will Kemalist intellectuals and Kemalist media, who regard the statesmen’s performing Friday prayer beginning from the term of the late Turgut Özal as a “reactionary act,” be able to digest this? 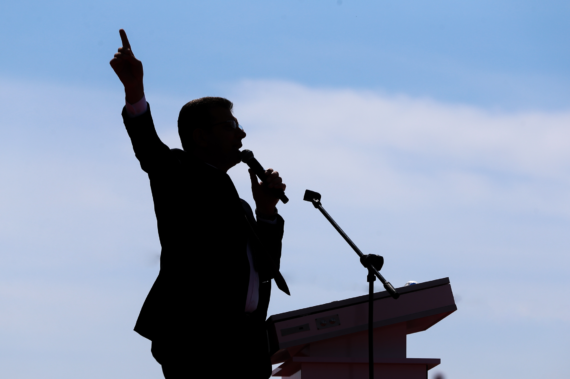 Istanbul mayor Ekrem Imamoglu addresses the crowd during a rally in Maltepe district of Istanbul, Turkey on April 21, 2019. Anadolu Agency

Before the objection process regarding the local election was completed, Ekrem İmamoğlu signed the book in Anıtkabir as Mayor of Istanbul only one day after the election and repeated almost every day that he is the new mayor of Istanbul. After 25 years, by a hair’s breadth, the Republican People’s Party (CHP) finally gained success with the support of the Iyi Party and the Peoples’ Democratic Party (HDP). So, the party marked a relative success for the first time after losing 8 elections in a row since Kemal Kılıçdaroğlu was elected as the party chairman in 2010. The CHP achieved this success with nationalist and former Nationalist Movement Party (MHP) member Mansur Yavaş in Ankara and with Ekrem İmamoğlu in Istanbul, whose profile is closer to the Justice and Development Party (AK Party) than the CHP. In Ankara, Yavaş and his friends celebrated their success by shouting Allah-u Akbar, whereas İmamoğlu performed a grace prayer in Eyüp Sultan Mosque.

Ekrem Imamoglu’s election in Istanbul affirms once again that a politician with a typical CHP, Kemalist, or secular identity cannot win an election in Turkey.

So, it was once again affirmed that a politician with a typical CHP, Kemalist, or secular identity cannot win an election in Turkey’s sociology. The leading name aware of this fact within the CHP has been İmamoğlu. With the adoption of the new presidential system, alliances also competed for the local election. In the previous election, the AK Party’s vote share was 42 percent and the CHP’s was 26 percent. The CHP built its strategy on this sociological aspect and won the election only with a difference of 13 thousand votes against Binali Yıldırım, who marked significant achievements in Turkey’s transportation system, took office as prime minister and parliamentary spokesperson.

Istanbul before and after Erdogan

Up until 1994, Istanbul was a city where garbage was hardly collected and piled up on streets, and in several instances the garbage piles exploded (in 1993, the garbage stored in Ümraniye exploded, leaving 37 people dead), tap water did not run most of the time and residents stored water in buckets. Also, public transportation means were very poor at the time. Only someone who owned a private car or could afford to pay for a taxi had the privilege of going to the other end of the city.

The Golden Horn was contaminated to such a degree that people could not breathe around it, whereas Topkapı, Suriçi and their neighborhoods almost turned into a dump. When Recep Tayyip Erdoğan was elected as Istanbul mayor 25 years ago, he took over from the CHP a city that was devastated in terms of urban development, which was a shame considering the glorious past of the city that once served as the capital of the East Roman Empire and Ottoman Empire.

Erdoğan’s team healed the city and marked a great period of recovery and progress in Istanbul for 25 years. They solved the water problem, restored historic buildings, afforested the city, and tulips eventually found their historic home again. The Golden Horn was cleaned and became home to 47 fish species and many parks, sports facilities and walking tracks were built around its surroundings. Istanbul has finally become a city with a giant underground web that makes reaching one end to the other end of the city very easy. The third transcontinental Bosphorus Bridge, namely Yavuz Sultan Selim Bridge, was built, and the rail system and road transport were connected with a sub-sea tunnel. Plus, two new airports were introduced to the city.

İmamoğlu endeavored to create an impression among the Kurdish and Muslim-conservative electorate that he is not a typical CHP politician.

Although it is hard to admit for Erdoğan dissidents, the municipal works in Istanbul that kicked off in 1994 and continued up until today have set a milestone for the city. With their service, the AK Party erased the bad memories of Istanbul under CHP’s rule, and İmamoğlu did his best throughout his campaign to avoid triggering this collective memory. Appearing as the joint candidate of the CHP, the Iyi Party and the HDP, İmamoğlu endeavored to create an impression among the Kurdish and Muslim-conservative electorate that he is not a typical CHP politician although the Kemalist mindset subjected these groups to oppression and suffering throughout the Republican history. As opposed to CHP Chairman Kılıçdaroğlu, who in regards to the New Zealand terrorist attack said, “terror coming from the Islam world caused different reactions across the world,” İmamoğlu recited Surah al-Yasin in Eyüp Mosque, which is located next to the Tomb of Eyüp Sultan, a companion of the Prophet Mohammad.

With their service in Istanbul, the AK Party erased the bad memories of Istanbul under CHP’s rule and Imamoglu did his best throughout his campaign to avoid triggering this memory.

İmamoğlu, who evidently received education in Koran courses as a child – although the CHP is proud to have shut down these courses – appeared with his hijab-wearing mother in the first photo he presented to the public. While some groups from the CHP base wrote “the tyranny started in 1453” on walls in Istanbul during violent Gezi Park Protests, and Kılıçdaroğlu ignorantly said that “the Ottomans tortured and annihilated the Turks,” İmamoğlu started his election campaign by paying a visit to the Tomb of Fatih Sultan Mehmet.

While addressing the HDP base in Istanbul, who said “we feel like traitors for voting for the CHP, but we’ll still opt for CHP although it breaks our hearts,” he adopted a careful tone by saying: “Istanbul is the city that has the highest population of Kurdish citizens. We will not discriminate against anyone.” But this does not represent the whole situation. As I heard from a Kurdish businessman years ago: “We could not even enter some doors until the Welfare Party won Istanbul municipality in 1994. As from that time, we have joined and won many bids.”

Although the CHP displays a sharp antagonism against Erdoğan, the CHP leader does not even attend national holiday receptions hosted by Erdoğan and called him an “illegitimate President” despite the fact that Erdoğan was elected as President by 52.6 percent in the first round, İmamoğlu visited the President in the early periods of his campaign, and said the following about the visit: “It’s been a good meeting, in which we listened to some experiences and suggestions about Istanbul. He has relayed valuable anecdotes. I also asked for the President’s vote.” So, the new mayor of Istanbul was all along aware of the fact that Erdoğan has been a determining and transforming figure in Turkish politics for 25 years.

And maybe this is why he seems to be a figure who is under transformation to such an extent that he took an oath to “protect the spirit of Istanbul” in a letter he wrote in address to Kemal Atatürk in the Anıtkabir notebook. So, for the first time again, a CHP politician mentioned the spirit of Istanbul. Even more, while entering the municipality office on his first day as mayor, he said: “This city is a sacred city that has a peculiar spirituality, prayers and experiences. Embracing all these requires an extraordinary depth.”

Unless the Supreme Election Council (YSK) accepts the objections of the AK Party and the elections are renewed, İmamoğlu is likely to become a new high-profile politician in Turkish politics. It is not yet known whether he has the extraordinary depth to govern Istanbul that he himself referred to. Will he continue his political path as a Republican son embracing the Seljuk and Ottoman heritage as opposed to his party’s constant fight against the country’s values ongoing since the early Republican period, or will he keep this fight like his party by ignoring a thousand year old past as if addressing an amnesic society?

Will Imamoglu continue his political path as a Republican who fight against the country’s own values, or will he draw a new profile leaving the CHP’s classical stance aside?

Will it set an impediment to his career within the CHP if he follows the first path? Even though it seems quite early to speculate on that, the first signs of it have already surfaced. Although İmamoğlu performed a grace prayer in Eyüp Sultan Mosque after the election, it was represented by the CHP mouthpiece Halk TV and other Kemalist media outlets as “İmamoğlu said prayers of peace.” This is the formula they came up with to avoid saying “salaat!”

The possible source of inspiration for this tone is also curious. During the visit paid by the Catholic Church spiritual leader Pope Benedict XVI to Sultanahmet Mosque in Istanbul, Istanbul Mufti Prof. Mustafa Çağrıcı had invented a formula. The Pope’s visit to the mosque was referred as a “stance of peace” in media. But this expression caused a disturbance in the Catholic world and spurred a series of heated polemics. Evidently, the formula invented for the Pope entered the Kemalist media’s literature since they said “prayers of peace” instead of “performing salaat.” As they say, the devil is in the details.

Will İmamoğlu, a high-profile CHP politician now, perform Friday prayer with congregation on Fridays? If so, will Kemalist intellectuals and Kemalist media, who regard the statesmen’s performing Friday prayer beginning from the term of the late Turgut Özal as a “reactionary act,” be able to digest this? Coincidentally, it was reported while penning these words that President Erdoğan and Istanbul Mayor İmamoğlu met in the funeral of a businessman. After performing Friday prayer, the two names appeared on the same row for funeral prayers.

Plus, İmamoğlu tweeted “May your Lailet Al Berat be blessed,” and liked two tweets shared by the President Erdoğan, which are as follows: “A 4.5 year-long continuous period of action now lies ahead of our country. As the 82 million citizens, we should make the most of this period. We should leave behind election debates and focus on our true agenda, first and foremost the economy and security,” and “It is now time to once again cool the hot iron, shake hands, hug each other and reinforce our unity and solidarity. Our target in the upcoming 4.5-year period is to enhance our people’s prosperity as well as to achieve Turkey’s goals for 2023 by preserving the security-freedom balance and eliminating threats against our country.”